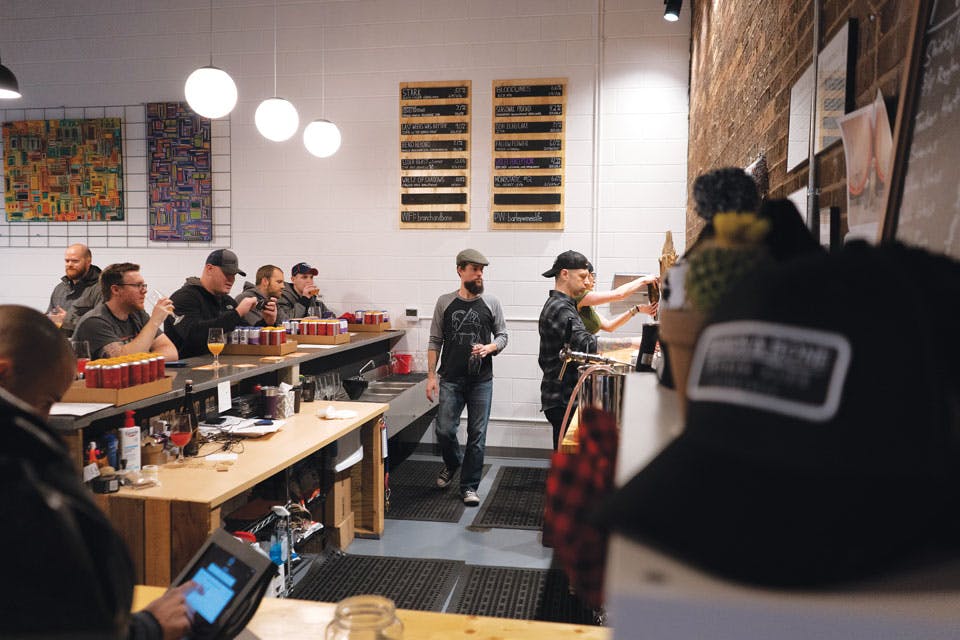 Branch & Bone Artisan Ales opened in a former mechanic shop in Dayton’s historic South Park neighborhood in June 2018. In less than two years, it’s become the hottest brewery in the Gem City, with a smart taproom often packed for special releases and a line around the building for monthly bottle and can releases. Brewer and co-founder Brett Smith is making esoteric-but-approachable beers in a variety of styles, from fruity sours to burly stouts. One of his beers — Silence Mill, a mixed-fermentation saison — recently won a medal at Chicago’s prestigious Festival of Barrel-Aged Beers.

Taproom Vibe: “We consciously tried to make the taproom fit the beer we make,” says Smith. “Simple, clean, modern, but rustic in some ways.” The small space is bright and airy with clean, modern design elements and thoughtful, rustic accents such as reclaimed barn wood for the bar front and tap handles made from branches. The brewery doesn’t have a kitchen, but food trucks provide a variety of options during the warmer months and several nearby eateries deliver. In fall 2019, Branch & Bone added a small patio out front. You won’t find many of the typical trappings of brewery taprooms here, and that’s by design. “There’s no TVs, no trivia nights,” says Smith. “We want it to be all about the beer and conversation.”

A Wide Variety: Branch & Bone kicks out a dizzying array of beer styles, and all are done at a high level. The fruity and botanical sour ales often evoke cocktail flavors, while wine-barrel-aged farmhouse ales balance rustic and refined elements. Muscular spirit-barrel-aged stouts sit alongside trendy and gracefully flavorful hazy IPAs. The occasional lager even makes its way onto the list. The variety appeals not only to beer geeks but to total newcomers to craft beer. “We get excited when someone comes into the taproom who isn’t into beer,” says Smith. “If they’re a wine or cider drinker, we have beers to fit that.”

Grown in Ohio: The folks behind Branch & Bone are sourcing many malts and hops from Ohio and work with local farms to acquire fruits and other flavor additions. “We’re using as many local ingredients as we can to brew beers that can’t exist anywhere else,” says Smith. He says to expect even more Ohio-grown ingredients in his beers in 2020. This spring will see the release of a mixed-fermentation beer with Ohio-foraged pawpaws. “It’s fun and cool to use something that not everyone is using or can use,” says Smith. “It’s tying our beer to where it’s from.”