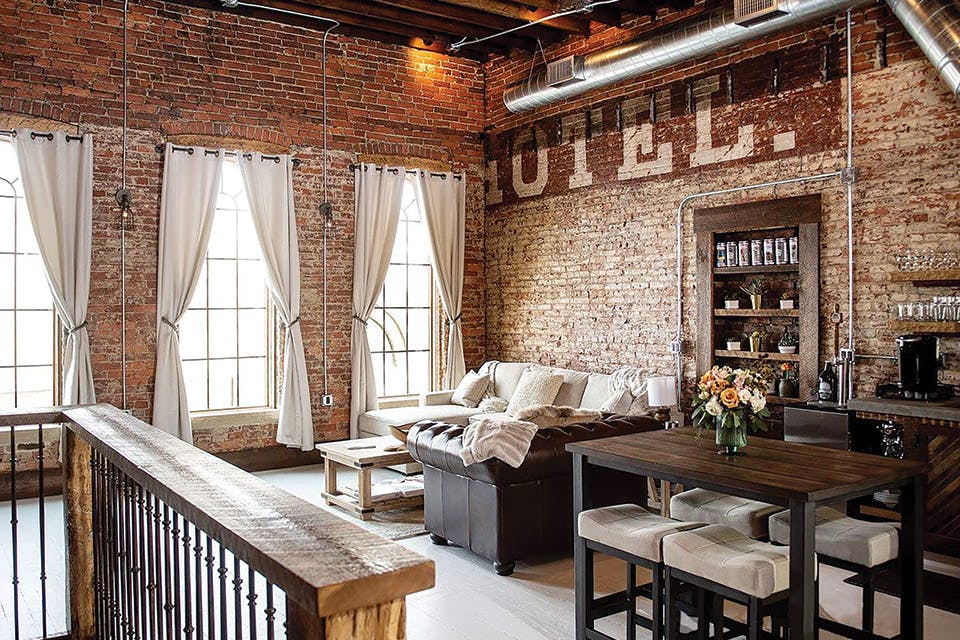 These three small beer-makers offer accommodations so their fans can book, sample and stay. Here’s how you can, too.

On a road trip through the West, long before they opened Sandy Springs Brewing Co. in small-town Minerva, Amanda and Andy Conrad had to take turns being the designated driver when they stopped at breweries. They were always glad for the chance to stay within walking distance and were especially grateful for the handful of breweries with nearby campgrounds.

“At Rogue Ales in Oregon, the campground is by their parking lot,” says Amanda Conrad.

When the couple opened their own brewery in 2019, they knew they wanted to offer the same for travelers. They unveiled their Brewers Quarters in the upper floor of one of the downtown buildings adjacent to the taproom a little over a year later. The rustic-chic, studio-style Airbnb lodging is warmed by exposed brick walls and wood joists and features comfy overstuffed couches and chairs, a king-size bed, and a kegerator that will draft dispense any Sandy Springs beer the guests choose.

“It allows us to have more people from out of town who come to see us and the surrounding area,” Conrad adds.

New for 2021 is the Sandy Springs Century Home, an Airbnb lodging option behind the brewery’s parking lot and beer garden. The newly restored, two-story home features classic black and white accents and contains memorabilia from the brewery in every room. With three bedrooms and a pull-out couch, the Century Home can sleep up to eight people. In lieu of a kegerator, every guest gets a free check-in beer in the taproom.

At Dalton Union Winery & Brewery near Marysville, Tonya and Dale Mabry converted the walk-out basement of their own home into an Airbnb. The large space has a theater room, poker room, pool table, bar area and a covered patio. There’s space for 10 people to sleep, so it’s become popular with bridal parties. The lodging is on the establishment’s beautiful 10-acre estate with a pond, woods and a small vineyard. The on-site taproom dispenses beer, wine, cider and mead all made on the property.

Betty and Bob Bollas at Fibonacci Brewing Co. in Cincinnati have also converted a 19th-century farmhouse on the wooded lot (now a beer garden) next to their taproom into unique Airbnb lodging. In 2019, they opened two rooms in the upstairs of the farmhouse and converted the downstairs into a taproom. Guests get a flight of beer in the taproom and apple fritters from a local century-old bakery.

“We figure guests will spend most of their time hanging out at the brewery with our goats Honey and Fiddlehead or exploring all the things to do in Cincinnati,” Betty Bollas says.