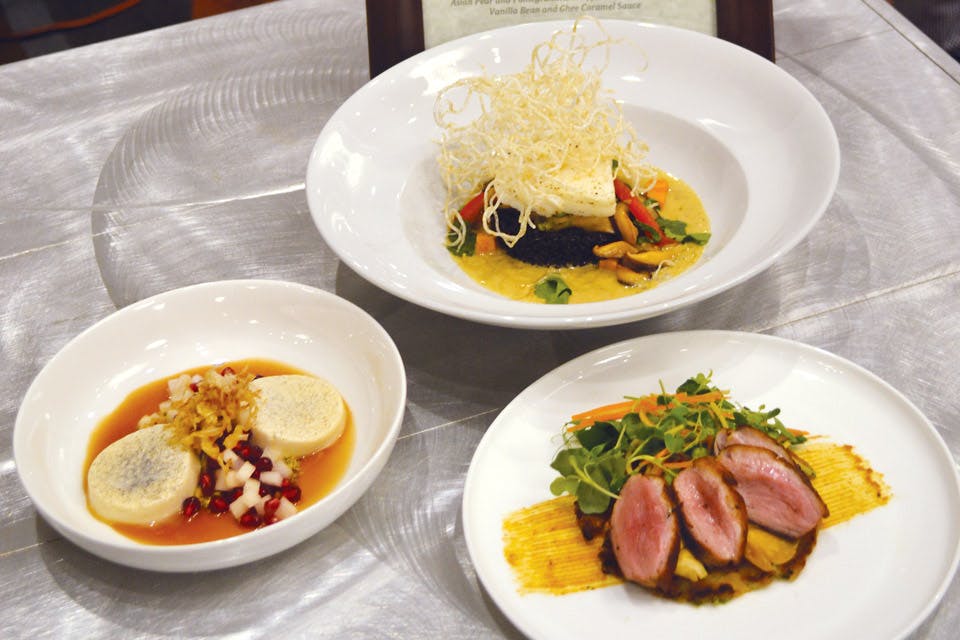 Pan-seared duck breast, served on a scallion pancake with peanut hoisin sauce, pickled mushrooms and vegetable slaw isn’t the sort of fare one expects from a high school cooking class. But it was the opening course of three that helped students at Parma’s Normandy High School take the top prize in the culinary category at the 2018 Ohio ProStart Invitational Feb. 24 and 25 in Columbus.

The sweets, sours and spices of Asian cuisine landed each of the seven Normandy High School students on the team a $20,000 scholarship and the opportunity to move on to the National ProStart Invitational in Rhode Island April 27 through 29.

“There was a lot of great communication [in the kitchen]. The judges were kind of drawn to their stations as they were working,” says Iann Johnson, culinary arts program senior instructor at Normandy High School.

Normandy High School also took the top spot in Ohio ProStart’s second annual Burger Battle, with a team of senior and sophomore students creating a Bahn Mi Burger, made with pickled slaw, butter lettuce and chili mayonnaise on a steamed Hawaiian roll. If you’re hungry at this point, the Normandy High School students also operate the Sword and Shield Restaurant, which is open for lunch on Thursdays and Fridays from October through May.

“It gives students the opportunity to see the real world of cooking and what it’s like to go out into the industry,” Johnson says.

Bistro 163 offers everything one expects from a neighborhood restaurant, but this gathering place is also geared toward helping those less fortunate.

The Port Clinton restaurant feeds the hungry by asking customers to pay what they can — be it more or less than the suggested price. Diners can also volunteer time if they are unable to pay.

Bistro 163 helps those facing poverty as well as those trying to turn their lives around following incarceration or substance abuse, says Stacy Maple, Bistro 163’s executive director and chef.

“Rather than trying to get through the day being sober, they have a place to come where they can feel good about being sober,” she explains.

The bistro also offers an after-school program for kids, providing homework help and a healthy meal. “Food is the connection,” says Maple, “but we feed a greater cause for sure.” bistro163.org

Much like lobster conjures images of New England, fall-off-the-bone barbecue takes our minds far beyond the Buckeye State. But Dayton’s Jeff Stringer says the South’s slow-cooking superiority is hogwash.

“You hear you have to go to Texas or Kansas City or the Carolinas to get good barbecue, but you don’t,” he says. “It’s available right here.”

Stringer’s food truck, Smokin’ Bee-Bee-Q, will be one of 12 outside The Yellow Cab Tavern April 14 for the Dayton Barbecue Rodeo. Stringer founded the event that also features live music and complimentary horse-drawn carriage rides. Plus, from noon to 2 p.m., attendees vote on the truck with their favorite pulled pork.

So, what is Stringer’s barbecue secret? He says it all comes down to care.

“Good barbecue comes from how much time you put into it,” he says. “You don’t have to spend thousands of dollars. You can just do it yourself at home.” yellowcabtavern.com