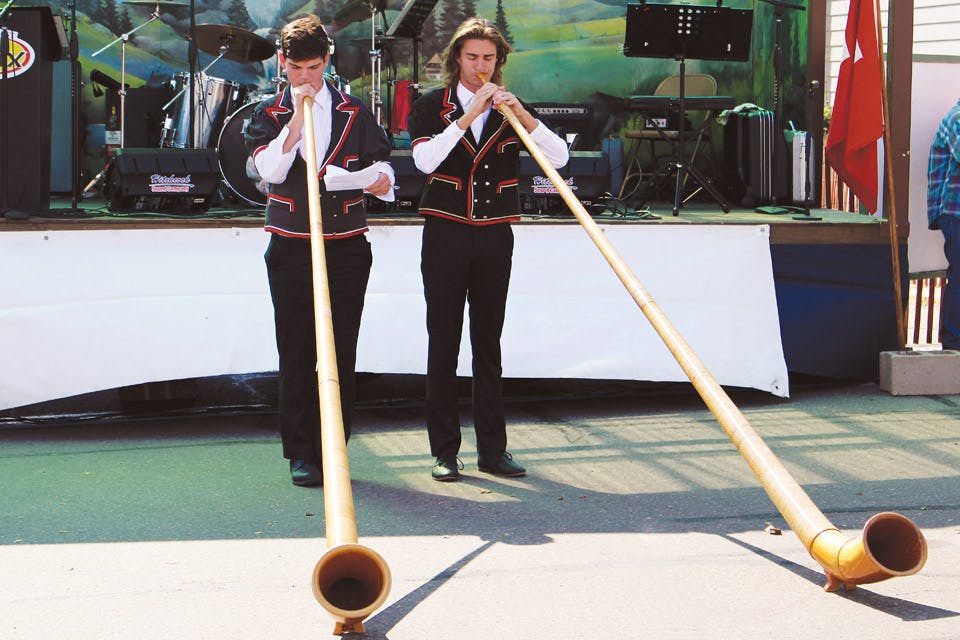 This community known as Ohio’s “Little Switzerland” has been celebrating its cheese-making tradition with an annual celebration since 1952.

Alpine-style facades adorn buildings, and Swiss flags fly proudly. In the middle of downtown, the World’s Largest Cuckoo Clock comes alive every half hour with music and twirling wooden dancers. Naturally, first-time visitors to Sugarcreek wonder how Ohio’s Little Switzerland ended up here, tucked away among the hills of Tuscarawas County.

During the early 1800s, Swiss families immigrating to America settled in Sugarcreek and the surrounding area because the rolling terrain reminded them of home. Local dairy farmers had an abundance of milk, and making cheese served as a way to use it before it went sour. The descendants of those original Swiss immigrants continued making cheese in the area for generations, and in 1952, Sugarcreek founded the Ohio Swiss Festival as a way to promote the town and its long cheese-making tradition.

“I always say, ‘We may not be the biggest, but we’re one of the most quaint and unique festivals,’” explains Scott Gerber, president of the annual celebration.

Three cheese-judging events are held throughout the year, with points awarded at each. The cheese-maker with the highest score following the final judging during the Ohio Swiss Festival is named the year’s Grand Champion. This year, Guggisberg, Pearl Valley, Broad Run, Bunker Hill and Steiner are taking part. The cheeses judged cover a range of Swiss, as well as an open classification for other cheese varieties.

Random audience members at the judging are also chosen to taste and vote on the People’s Choice winner. An auction sells off several-pound blocks of the champion cheeses to the highest bidder. The auction is open to the public, but local businesses routinely buy the cheese to sell at their shops. Smaller amounts of the cheese can also be purchased at the fire station during the festival (see sidebar below). Last year, the auction raised more than $19,500, with proceeds shared between the Ohio Swiss Cheese Association and the Ohio Swiss Festival.

“There are a lot of things to do at the festival,” Gerber adds, “but we still say the cheese is the king.” This year's festival runs Sept. 28 and 29 with some events starting on Sept. 26. Visit the festival website for full schedule of events. 106 W. Main St., Sugarcreek 44681, ohioswissfestival.com

Cheese 3 Ways
Keep an eye out for these treats at the Ohio Swiss Festival.

Cheese on a Stick: While walking throughout the festival, keep an eye out for the stand offering fried cheese on a stick. Much like a corndog, the cheese is breaded and fried to
golden brown perfection.