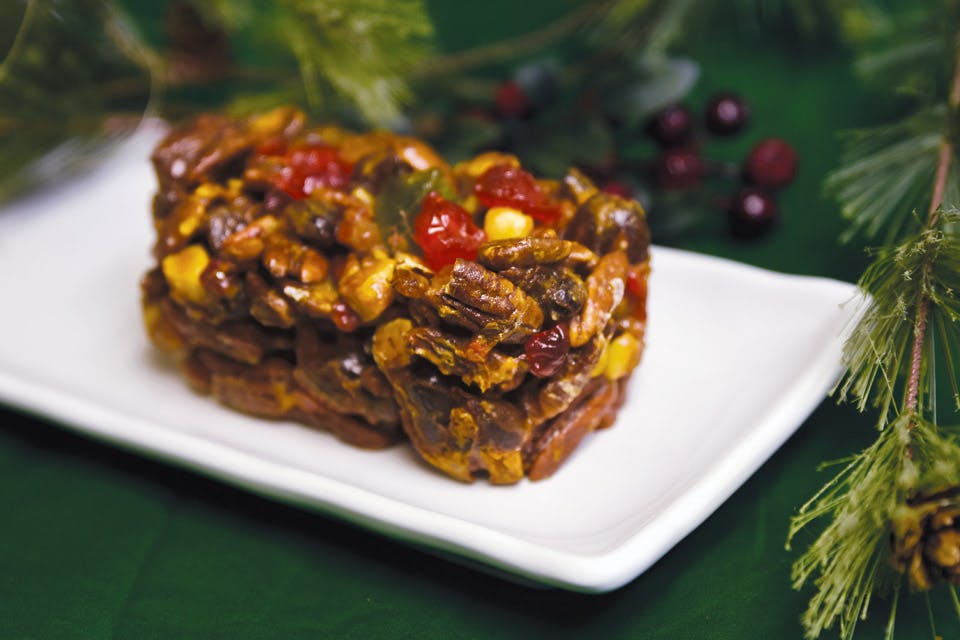 Where to Buy a Great Fruitcake (Really!)

Summit County’s The Bake Shop in Ghent gives the holiday staple some much-needed appreciation with its secret recipe.

Fruitcake doesn’t get much respect. Despite its pedigree of being served at British royal weddings, the dense cakes packed with fruit and nuts are now more of a seasonal joke than a beloved treat on this side of the Atlantic.

“Fruitcake has a bad name,” says Nancy Fay, owner of The Bake Shop in Ghent, located in an 1837 home. “People use them as doorstops or pass them around for years.”

Every holiday season, Fay works to change the way we think about fruitcake. Sure, you have to pay a little more than the mass-produced versions you’ll find at grocery-store chains (Fay charges $18 for hers), but the end result speaks for itself.

Fruitcake was a popular choice for royal weddings because the alcohol with which it was made worked as a preservative and the expensive ingredients were a symbol of wealth. The Bake Shop in Ghent’s fruitcake has no citron fruit, no alcohol and not a lot of cake batter. Instead, it sparkles with red and green cherries and is packed with nuts. The exact ingredients, however, remain a closely guarded secret.

Fruitcake Facts
Ohio has a few famous connections to the misunderstood holiday treat.

• The Apollo 11 astronauts, including Wapakoneta native Neil Armstrong, had their chance to consume a fruitcake in space during their 1969 mission, but declined to take such a step for mankind. Instead, they brought it back, and it’s now part of the National Air and Space Museum collection.

• In 2011, Cincinnati’s Elite Estate Group auctioned a fruitcake made by The Kroger Co. in 1941. The unopened fruitcake was returned to a Kroger grocery store in 1971, and the store manager had kept it at his home for years. An anonymous bidder paid $525 for the fruitcake, with proceeds from the auction going to charity.

• In the early 20th century, Cincinnati resident Grace Rush made elaborate fruitcakes for her family and friends with a recipe borrowed from a neighbor. In 1917, Rush’s sister convinced a New York City bakery to sell the fruitcakes, launching Martha Ann Fruitcakes. The company, which eventually sold fruitcakes across the U.S., was named after Rush’s daughter.