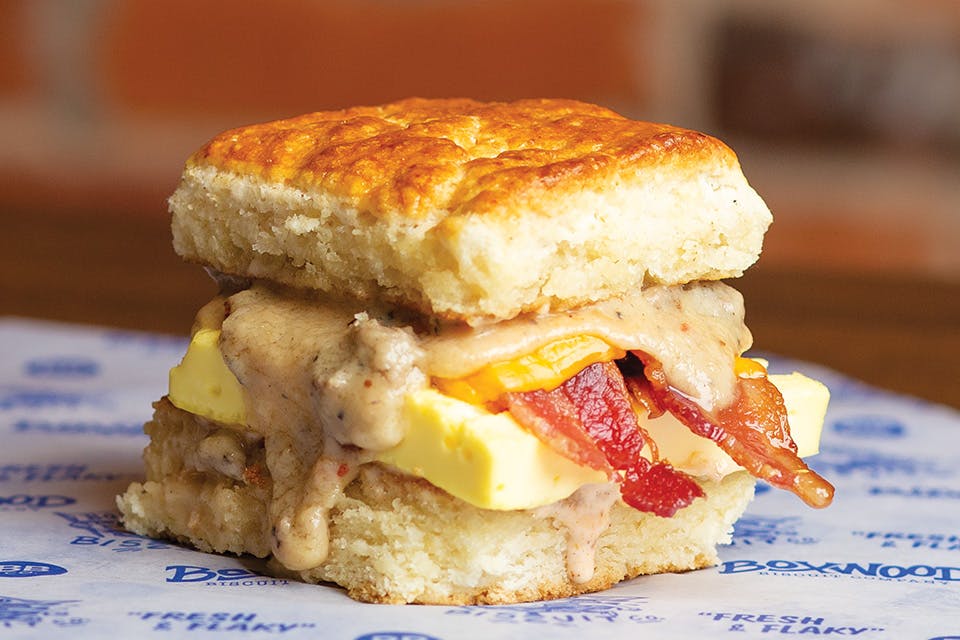 After starting as a pop-up shop in summer 2020, Boxwood Biscuit Co. now has its own home in the Short North Arts District.

When the pandemic hit in 2020, Luke Pierce and Annie Williams Pierce, owners of Law Bird cocktail bar in Columbus, made two shifts: First, they reconfigured their bar as a carryout shop, and second, they launched a pop-up called Boxwood Biscuit Co.

“When the bar was forced to close, we had a rough idea of how we could pivot the Law Bird brand into the shop,” says Annie Williams Pierce, adding that the bar reopened May 5, 2021. “Enter Luke, and his fabulous brain, thinking we should do a weekend pop-up utilizing the kitchen.”

The two saw a dearth of biscuit concepts in Columbus, so they opened the pop-up in summer 2020. (After months of growing menus and sellout weekends, Boxwood Biscuit Co. moved into its own space in the Short North Arts District in March 2021.) To initially develop the menu, the owners tapped Tyler Minnis, who they knew as chef at The Market Italian Village.

“After a couple months of quarantine, they reached out and pitched Boxwood to me over dinner,” Minnis recalls. “After a bunch of baking at my house and some more menu development, the brunch concept launched that August.”

The name of the game, of course, is biscuits, and Minnis serves his flaky, golden brown biscuits in sandwiches, although they stand on their own, especially fresh from the oven.

“They are so hot, light and airy, they are great just plain with nothing on them,” Minnis says.

And is it really a biscuit joint if there’s not gravy? Boxwood offers a choice of expertly crafted gravies: a pork sausage miso (Minnis’ favorite), vegan Impossible sausage miso, red eye made with Thunderkiss Coffee, a truffle creamed spinach and a rotating special. Diners can even order a flight of three gravies to go with their biscuits.

Where Boxwood Biscuit Co. really shines is the handheld biscuit sandwiches. Minnis and Williams Pierce recommend The Franklin. Minnis composes the sandwich, which is really more of a knife-and-fork affair, with a baked egg, bacon, American cheese, caramelized onions, a tangy house “fancy sauce,” plus a scoop of the miso pork gravy and a drizzle of maple syrup.