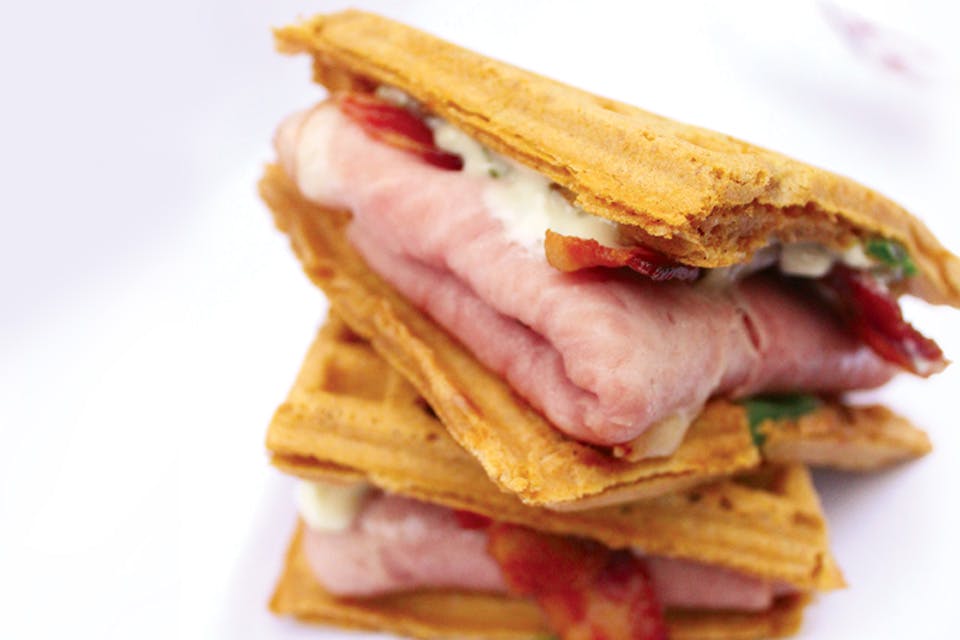 February 2018
BY David Nilsen | Photo courtesy of The Drunken Waffle

February 2018
BY David Nilsen | Photo courtesy of The Drunken Waffle

Beth Sparks tried chicken and waffles for the first time at Cincinnati’s Bunbury Music Festival in 2013. The popular southern dish was a revelation for the longtime restaurant professional, who had been looking for a unique concept for the food truck she dreamed of opening.

“I tasted it and thought to myself, Oh my God, this is it,” she recalls.

Sparks began experimenting with recipes to re-create the dish but added her own twist. You see, these aren’t just any waffles. Sparks uses beer from local craft breweries in place of milk in her batter, an idea she had from her very first waffle attempts. Today, Sparks’ The Drunken Waffle food truck offers an array of bizarre but delicious sandwiches that use her beer-infused waffles in place of bread.

Her most popular sandwich is the War Pig, which has ham, bacon and cheese on a spicy pepper waffle. Sparks worked with Dayton’s Toxic Brew Co. to use a pale ale made with hot peppers, which provides the perfect kick for the spicy and savory sandwich. The brewery’s Practice Yoga IPA has also been added to several creations, including the Notorious B.I.G. cheeseburger and the Reservoir Dog corndog.

Sparks says the beer provides a noticeable flavor, although she makes a few waffles with milder brews as well. For those who don’t want to take on an entire sandwich, waffles can also be ordered on their own.

So, which comes first with new recipes, the sandwich or the beer? Sparks says it goes both ways. Sometimes a waffle recipe will have her looking for the perfect brew, while sometimes she tastes a beer so good she invents a sandwich to utilize it. In addition to Toxic Brew Co., she’s also worked with Middletown’s FigLeaf Brewing Co. and Dayton’s Eudora Brewing Co., and she hopes to add more Dayton-area breweries to the list.

“There have been a few times I’ve had a beer and thought, Oh man, I need to make this into a waffle,” Sparks says. “We try to make food you’ve never tasted before.”