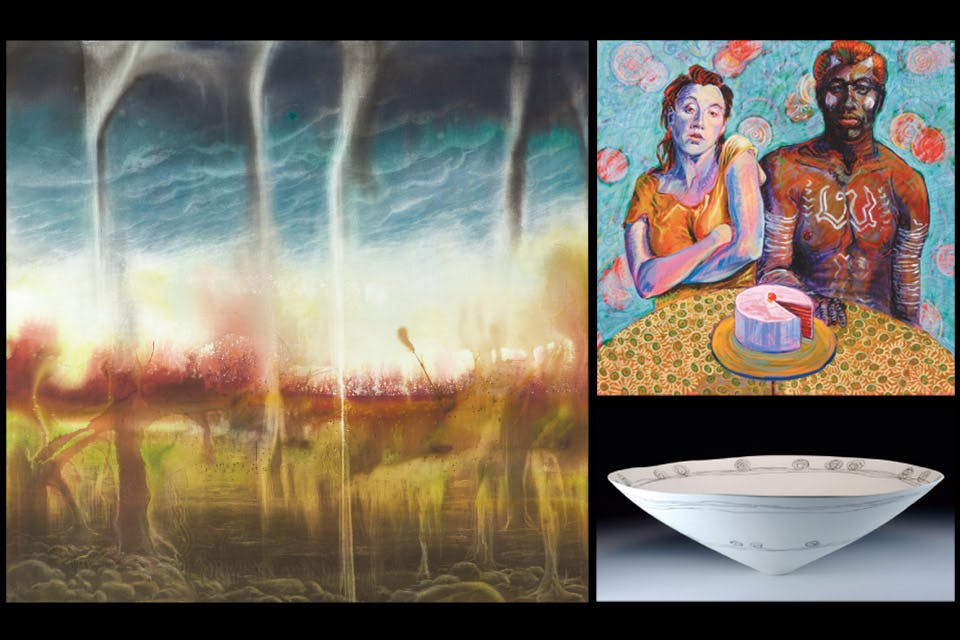 Through watercolor, oil painting and porcelain creations, “Three Voices: Conversations on Life and Conflict” brings the experiences and thoughts of a trio of Ohio artists together in one exhibition. Previously on display at the Canton Museum of Art, this show features nearly 50 pieces of work by Judith Brandon, Carol Snyder and Leslie Shiels. We talked to each artist about her inspiration and the message behind her art.

Judith Brandon: The Cleveland painter uses her works to show an emotional connection with people and nature, drawing inspiration from her daily life. “I made watercolor pieces when I lost my parents and wanted to make giant waves,” says Brandon, “because grief is washing over you like a wave, and you have to learn to go with the flow and allow yourself to feel miserable.”

Carol Snyder: After exploring different mediums in college, Carol Snyder discovered ceramics as her artistic calling. She uses patterns and textures drawn from various landscapes to create her works. “They portray a sense of quiet and peace,” says the Columbus-based artist. “There is enough conflict and ugliness in the world. My art is an escape from that.”

Leslie Shiels: The Cincinnati painter’s works in the exhibition were chosen from her Cultural Connections series, dedicated to highlighting different cultures and how others perceive them. “I went to Africa and I spent a lot of time in France,” Shiels says. “Even though they have similar longitudes, they’re considered completely different in terms of their worldviews. There was so much that these cultures had in common that people had assumed were not commonalities.”

For more information on this exhibition, visit decartsohio.org.