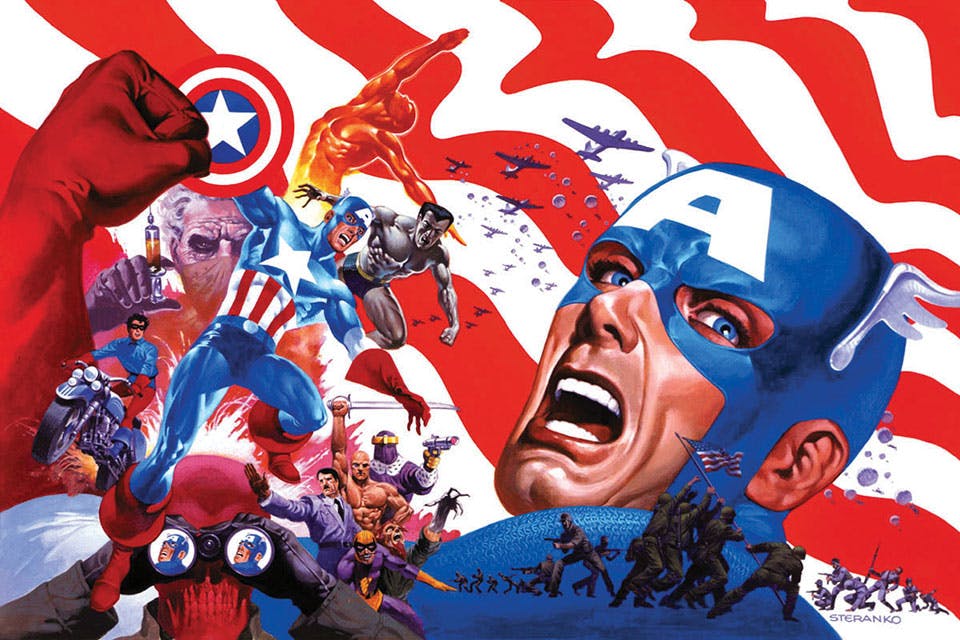 ‘Steranko and the American Hero’ in Youngstown

Artist Jim Steranko has depicted many American heroes during his career, from Nick Fury to Batman. An exhibition of his works opens this month at The Butler Institute of American Art.

Jim Steranko’s work has a cinematic quality — as does his life. He grew up poor in Pennsylvania coal country, but his various careers have taken him to dizzying heights. As a musician, he was friends with Bill Haley and the Comets, but he is best known as a legendary artist for Marvel Comics as it rose in prominence during the art form’s Silver Age and after.

He worked on Captain America and helped develop the identity of Nick Fury, who evolved from a hard-bitten World War II commando to the head of the super-spy network S.H.I.E.L.D. Today, Steranko is still surprised at the ubiquity and popularity of Marvel comics, TV shows and movies.

“I don’t think anyone — not even Stan Lee or Jack Kirby — could have predicted how massive the franchise could have become,” he says.

Steranko will have his first major solo, all-paintings exhibition March 13 through May 29 at The Butler Institute of American Art in Youngstown. (A meet-the-artist event is scheduled for April 9.) “Steranko and the American Hero” will feature more than 60 of his works. In addition to Marvel characters, he’ll show his interpretation of Sherlock Holmes (“I know he’s English,” Steranko concedes. “We adopted him.”), The Shadow (he made covers for the reissue of some of the original pulp paperbacks in the 1970s) and others.

“I wanted to show a range,” he says. “From Western book covers to science fiction a million years in the future.”

Many of the fictional characters Steranko painted over the years were, at one point or another, in the movies, and a conversation with him is peppered with how he’s met many of the actors who brought them to life at one time or another. He bought Johnny Weissmuller a drink and convinced him to do the Tarzan yell in a bar in Arizona. He met Clayton Moore, who portrayed The Lone Ranger in the 1950s; Kirk Allyn, the first actor to play Superman; and 1960s Batman Adam West.

“You know how there are some movies where everything works together, and it’s like magic?” Steranko says. “That’s what I try to do in my painting. These characters have all had cinematic lives, and I try to capture that essence.”