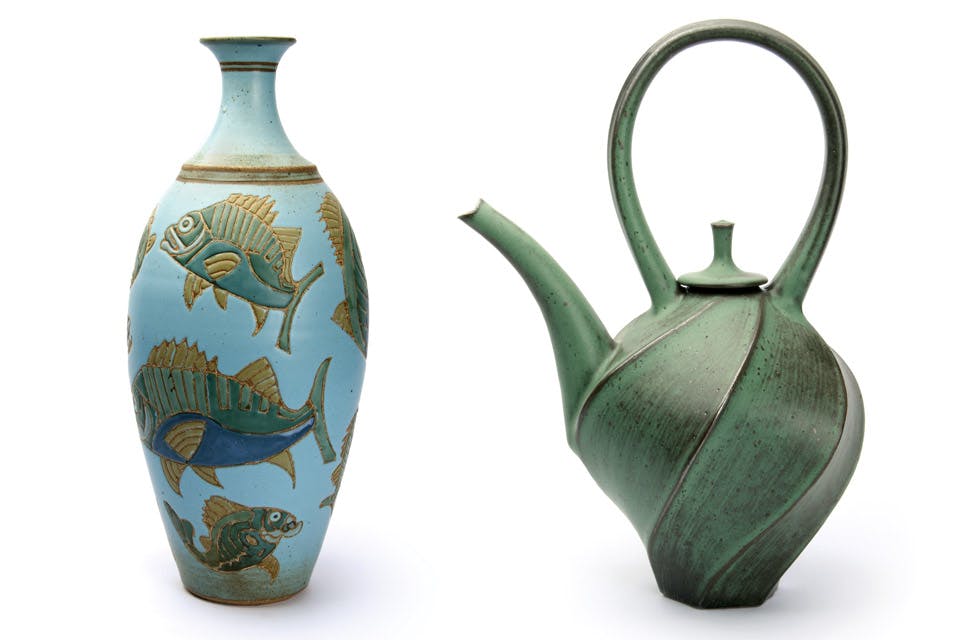 To Tim Frederich, there’s nothing so satisfying as the feeling of wet clay oozing between his fingers.

“I never get tired of the sensation,” the Dublin potter says. “The fact that an object can be created by using your hands ... as the wheel is turning, pulling clay into something, is miraculous to me.”

For 45 years, the 66-year-old has plied his craft with aplomb, making stoneware that’s both fashionable and functional. Through April 13, the Decorative Arts Center of Ohio in Lancaster is presenting “My Best Friends are Potters,” a showcase of 100 ceramic pieces produced by Frederich and artists he admires. All are from Frederich’s personal collection, which has garnered admiration from the artistic community.

“The pottery on display is exquisite,” says Decorative Arts Center curator Hal Stevens. “The design, the skill of the craftsmanship, the flow of the glaze. … These works are meant to be viewed with the same eye as one would look at a sculpture or a painting.”

Stevens isn’t surprised by the wealth of talent on display. He credits the richness of the clay found along the Ohio River and throughout southeast Ohio as catalysts for creativity.

“Prior to World War II, art ceramics were produced by renowned factories that included Rookwood [in Cincinnati] and Weller [in Zanesville],” he says. “But after the war, it was part of the psyche that artists who’d been in the service wanted to open their own studios, build their own kilns and work independently.” 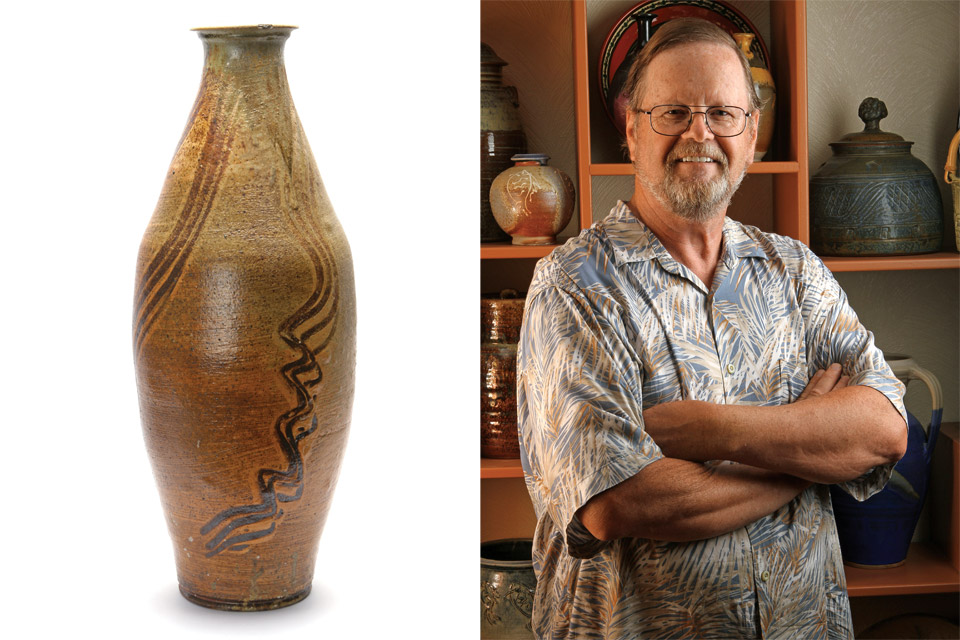 This stoneware vase Tim Frederich created in 2013 was part of the Decorative Arts Center of Ohio exhibit.

And, like those early artists, Frederich has a passion for pottery that’s never waned. He discovered his life’s calling by happenstance in the late ’60s, while attending an art class with a friend at the College of St. Mary of the Springs (now Ohio Dominican University) in Columbus.

“I was drifting through college, taking random courses,” Frederich recalls. “I had no idea what I really wanted to do. My friend sat me down at the [potter’s] wheel and I threw three little pots. That’s all it took.”

The next day, the budding artist declared art to be his major. Frederich went on to earn a B.F.A. in ceramics at The Ohio State University.

“I can’t draw or paint to save my life, but if you put material in my hands and ask me to shape something with it, I can,” he says. “I am three-dimensionally oriented. I can touch it, I can feel it, and I can almost taste it.”

Upon graduation from Ohio State, he opened a studio and began honing his talents. As Frederich met fellow potters, he began a collection that now contains more than a thousand pieces.

“I don’t buy anything if it doesn’t speak to me,” he says. “I can’t explain it any better than that. Color, shape and size don’t matter. It has to be a piece I know will excite me when I see it in my home day after day.”

Frederich, Stevens and co-curator Barbara Hunzicker deliberated over which pieces would be featured in the exhibition. Favorites include an iridescent orange stoneware platter by Indiana artist Dee Schaad and a teapot by South Carolina craftsman Jim Connell.

“The lines of the teapot are the epitome of elegance,” Stevens says. “It’s not at all like the one your grandmother used.”