The Cincinnati Art Museum hosts an exhibition of photographs by the renowned painter that offers a different look at her artistic life.

From paintings to clothes, it seems every creative aspect of artist Georgia O’Keeffe’s life has been closely examined. “Georgia O’Keeffe, Photographer,” on display at the Cincinnati Art Museum from Feb. 3 through May 7, takes a new look at the Modernist artist through nearly 100 of her photographs, accompanied by a selection of paintings and sketches.

It was known that O’Keeffe played a hand in the work of her husband, famed photographer Alfred Stieglitz, making prints and posing for his photos. But it wasn’t obvious how important of a medium it was to O’Keeffe until the touring exhibition’s curator, Lisa Volpe of the Museum of Fine Arts, Houston, discovered that the Georgia O’Keeffe Museum in Santa Fe, New Mexico, had a large archive of the artist’s photographs that had not been extensively examined as a medium in which O’Keeffe worked.

“We didn’t even know that this was part of her artistic life in a fundamental way,” says Nathaniel M. Stein, Cincinnati Art Museum’s curator of photography. “So, this is an opportunity to explore a new dimension of an artist we thought we knew.”

The mostly black-and-white photos were primarily taken after Stieglitz died in 1946. They explore subjects that anyone familiar with O’Keeffe’s paintings will recognize: desert landscapes of New Mexico, adobe architecture, animal skulls and flowers. There are also dynamic photos of the surf washing across black sand beaches in Hawaii and New York City’s Chrysler Building, accented by a strip of gauzy fabric in the corner of the frame. 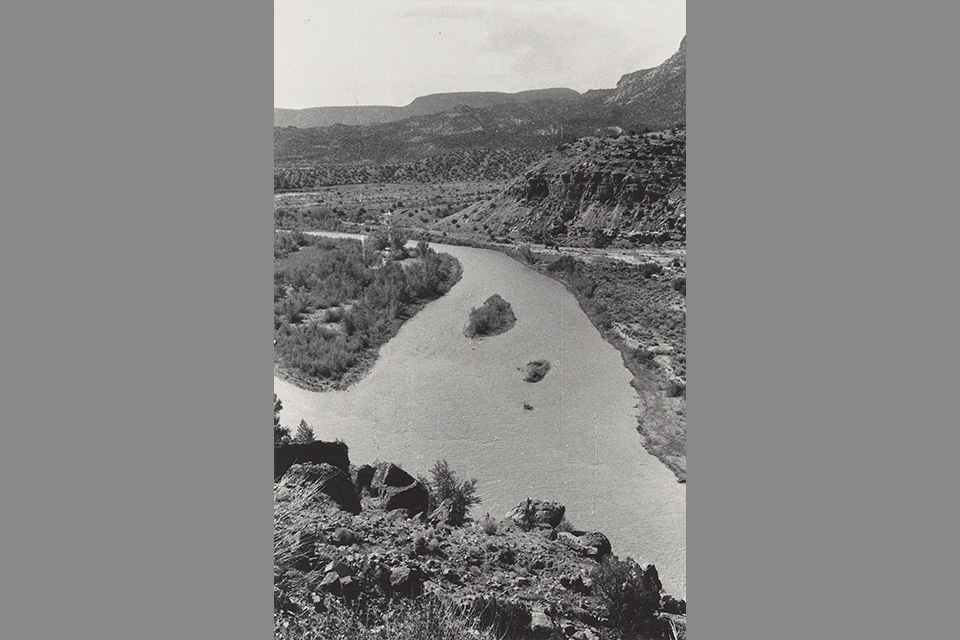 While the photos may mirror the subjects of O’Keeffe’s paintings, most were not intended as references for them. Instead, the artist used photography to explore the limits of framing, as well as light and shadow, often on subjects she’d already painted.

“She’s returning to a subject that had long fascinated her and thinking about it again in a new medium,” says Stein. “She’s really interested in exploring that as an artist with a voracious appetite, to see the world in new ways and to use media to express her inner experience.”

Unlike most photographers of the time, O’Keeffe was far more interested in the image in the photo than in the process itself. She had a friend help make her prints and even sometimes printed film at the drugstore. She kept notes about basic camera functionality to reference. Some of those handwritten notes are included in the exhibition, as well as other ephemera including vintage cameras like the ones O’Keeffe would have used, and her spotting kit, which was used for touching up photos after printing.

“My hope,” says Stein, “is that people walk away from the exhibit with what seems like the impossible dream: to understand Georgia O’Keeffe in a slightly new way.”