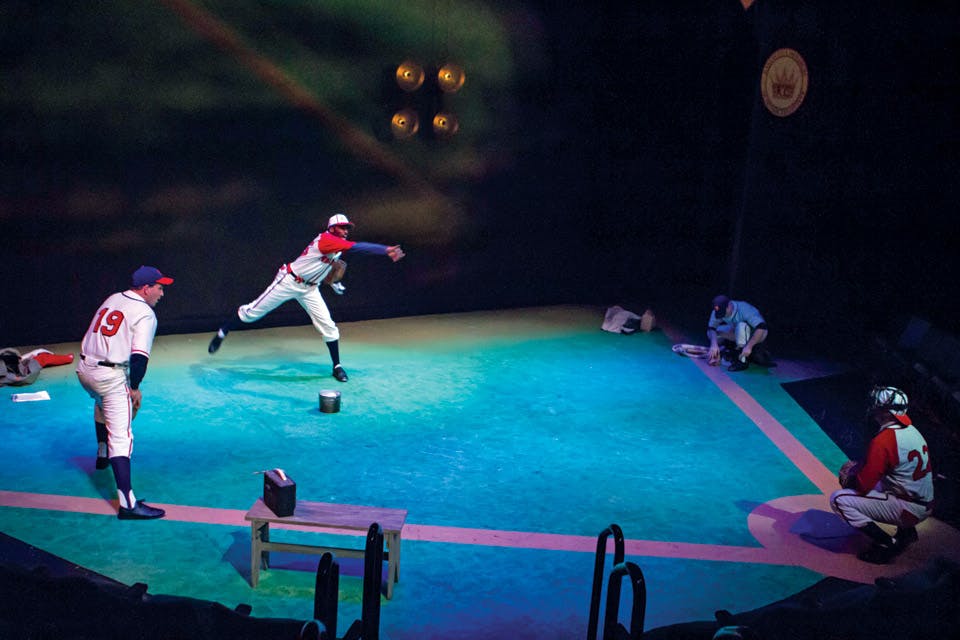 Cincinnati Playhouse in the Park presents the dramatic tale of a king of baseball and the time in which he lived.

Long before he signed with the Cleveland Indians in 1948, Leroy “Satchel” Paige was a legend in baseball’s Negro Leagues. Although statistics were not meticulously recorded, he chalked up numbers that were clearly major-league worthy, drawing admiration from some of the greatest stars of the era.

And yet, when Major League Baseball ended segregation in 1947, Paige, 41, was not chosen to lead the way. Instead, Brooklyn Dodgers team president and general manager Branch Rickey selected 28-year-old Jackie Robinson, a second baseman who had played just one season in the Negro Leagues.

“Maybe it happened too late and everybody figured I was too old. … But signing Jackie like they did hurt me deep down,” Paige wrote in his 1962 memoir, Maybe I’ll Pitch Forever. “I’d been the guy who’d started all that big talk about letting us in the big time.”

Paige’s story resonated with playwrights Trey Ellis, an associate professor at the Columbia University School of the Arts, and Ricardo Khan, a visiting professor of theater at the University of Missouri-Kansas City. In 2009, they had teamed up to pen “Fly,” a drama about the Tuskegee Airmen, a group of African-American military pilots who fought in World War II. For them, Paige was the ideal subject for their next project.

“Like the Tuskegee men, Satchel Paige was not trying to become a hero. He just wanted to show the world that excellence can overcome any condition of adversity,” Khan says. “So in our play, Trey and I didn’t want to present a history lesson. Instead, we wanted to explore relationships between people in Satchel’s world and get into the human stories.”

The result, “Satchel Paige and the Kansas City Swing,” takes center stage at the Cincinnati Playhouse in the Park April 23 through May 21.

The curtain rises on a rainy September morning in 1947, when Paige and his teammates are traveling cross-country on a barnstorming tour that will pit them against major leaguers, including Feller and his team of all-stars. Since weather threatens to postpone the contest, the players while away the hours in a Kansas City boarding house. Against a backdrop of the jazz music the Missouri town was known for — and referenced in the play’s title — veterans and rookies from both teams debate the merits of Robinson’s entry into major league baseball.

As Paige listens, his heart sinks. It’s clear Robinson is eclipsing him, which begs the question: What’s next for him and the teams he devoted his life to?

“Many plays about baseball are about the uplifting magnificence of the game,” Ellis says. “We wanted to earn the right to do that. So instead of beginning in the early 1940s, when Negro Leagues players were playing to packed ballparks, we picked up shortly after Jackie Robinson had entered the major leagues, and no one is coming to these segregated games anymore. As they dissolved, there was a sadness that remained.”

Satchel Paige’s hardscrabble story is one that continues to be embraced by baseball enthusiasts. Born in 1906 in Mobile, Alabama, Paige spent his formative years working as a porter at a nearby train station, transporting satchels to neighboring hotels. The extra cash helped support his parents and 10 siblings. The nickname the position netted would last a lifetime and beyond.

A run-in with the law involving petty theft and truancy when Paige was 12 led to a five-and-a-half year stint at a reform school in Mount Meigs, Alabama. It was there that the right-hander’s prowess on the mound was nurtured.

“Rising by more than 6 feet and weighing barely 140 pounds, Satchel joked that if he stood sideways you could not see him,” says Larry Tye, author of Satchel: The Life and Times of an American Legend. “His wiry arms and stilt-like legs were aerodynamically perfect to propel the ball from mound to plate.”

When he wasn’t working as part of his reform-school day, Paige was fine-tuning his pitching. His most famous delivery was one he dubbed “the hesitation pitch,” which involved throwing the ball toward the plate only after deliberately pausing as his left foot hit the ground.

“Pitching is all about offsetting the batter’s timing and getting into the batter’s mind in such a way that so many different things might be coming at him, rather than just a fastball or a curveball or a change-up,” says Morris Eckhouse, former executive director of the Society for American Baseball Research and current administrator of Cleveland’s Baseball Heritage Museum. “Paige was a master at that.”

Paige began his professional career in 1926 in the Negro Southern League, playing in teams around the country from California to Maryland. According to a study commissioned in 2000 by the National Baseball Hall of Fame and Museum and produced by the Negro Leagues Researchers and Authors Group, Paige recorded 103 wins and 61 losses, 1,231 strikeouts and 253 bases on balls during the two decades he played for the Negro Leagues.

His on-field antics, which included sending outfielders to the dugout before confidently striking out the batter at the plate, and charismatic idioms such as, “Age is a case of mind over matter. If you don’t mind, it don’t matter,” garnered him legions of fans from all ethnicities.

“Jackie opened the door to the new racial reality,” Tye says. “But, as one veteran Negro Leaguer said, it was Satchel who inserted the key.”

The author adds that although Paige deserved the honor of being the first black player to be signed by Major League Baseball, it’s no surprise he was not.

“It wasn’t just the fact that Jackie Robinson was a younger guy,” Tye says. “Branch Rickey was also looking for someone he knew would be compliant, someone who would not argue with him. ... And, to be honest, Rickey might have thought Satchel was over-the-hill. After all, who could believe a 40-something-year-old ballplayer could come in and play like a rookie of the year?”

Cleveland Indians owner Bill Veeck thought it was possible, but he took no chances. Veeck reportedly laid a cigarette on the ground and told Paige to think of it as home plate, before watching in in astonishment as the hurler fired five fastballs, all but one sailing directly over the cigarette. On July 9, 1948, two days after celebrating his 42nd birthday, Paige became the oldest player to debut in the major leagues. During his first year in Cleveland, Paige went 6-1 with an outstanding 2.48 ERA and helped the Indians win the 1948 World Series.

“After being given his chance by Bill Veeck, he helped pitch Cleveland to the World Series and, in so doing, was on a world championship team long before Jackie Robinson and the Dodgers finally won it in 1955,” Eckhouse says.

In addition to Cleveland, Paige played for the St. Louis Browns and the Kansas City Athletics, compiling a 28-31 record, with 33 saves and a 3.29 ERA. He also served as a pitching coach for the Atlanta Braves during the 1968 and 1969 seasons. Paige was inducted into the National Baseball Hall of Fame in 1971 and continued to make personal appearances until his death on June 8, 1982, at age 75.

“Watching someone’s journey unfold onstage can be a very emotional experience,” playwright Ellis says. “I hope [audiences] learn something about chapters in history they may have misunderstood. It is possible to crystallize human spirit and ambition, and we tried to illustrate those big things.”