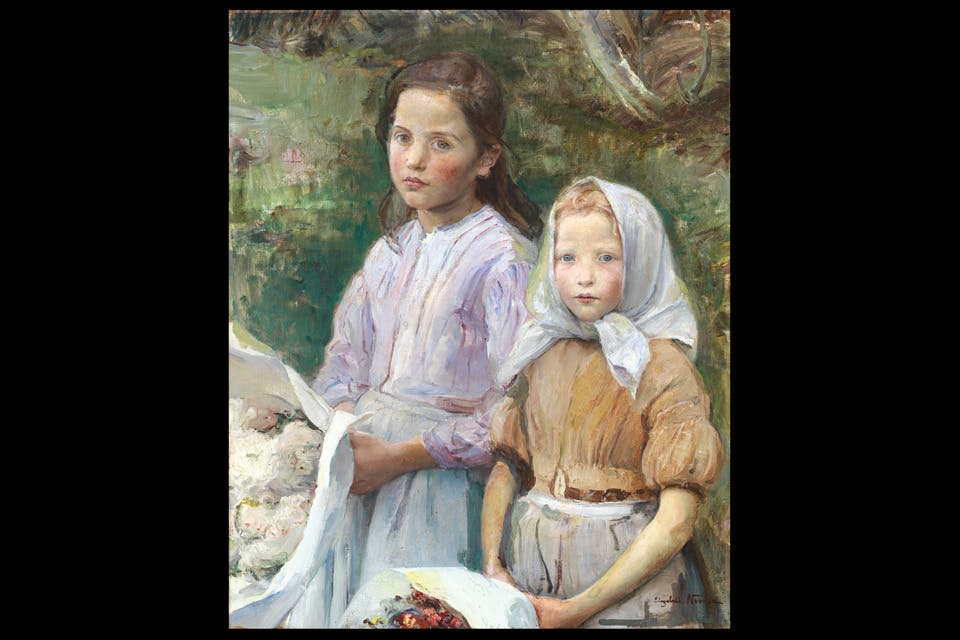 A key acquisition by the Cincinnati Art Museum prompts an exhibition of works by native Ohioan and painter Elizabeth Nourse.

Julie Aronson knew at first glance she wanted the painting. Over the years, the Cincinnati Art Museum curator had seen photographic reproductions of “The First Communion” — Cincinnati artist Elizabeth Nourse’s nearly life-size depiction of a nun helping two girls prepare for the sacrament of the Holy Eucharist.

But when Aronson stood in front of the original 118-year-old, oil-on-canvas painting hanging in the reception room of the Cincinnati Catholic Women’s Association, she couldn’t help but be stunned by its beauty and scale.

“I immediately brought our director to see it,” says Aronson, the museum’s curator of American paintings, sculpture and drawings. “Nourse was the only female painter from Cincinnati who achieved an international reputation during her lifetime.” 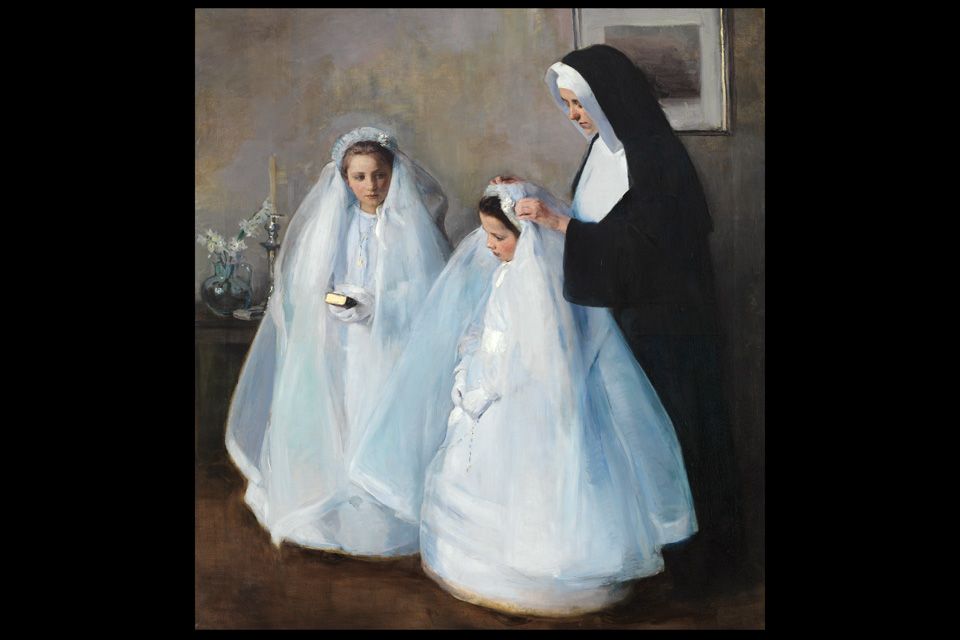 So, when the Cincinnati Catholic Women’s Association decided to sell the painting to the museum just over a year ago, Aronson knew the time for an
Elizabeth Nourse exhibition was at hand.

Through March 2, the arresting depiction takes center stage in “Elizabeth Nourse: Rites of Passage,” a display featuring 27 paintings, watercolors, drawings and cloth dolls the artist completed between 1880 and 1913.

Nourse painted “The First Communion” in 1895 from studies she had done the previous year while visiting Saint Gildas-de-Rhuys, a coastal village in the French province of Brittany. Sent on tour in Europe and the United States, the painting drew considerable praise for Nourse’s beautiful brushwork, strong composition and masterful white, black and gray tonal relationships. A review in Monthly Illustrator not only lauded her “marvelously well-managed” depiction of the young communicants’ white gowns but also proclaimed that Nourse was “a painter of marked excellence.”

“The painting made Nourse better known and also helped to establish a market for her work in the United States,” the curator says.

Born in 1859 in Mount Healthy, a village just north of Cincinnati that was considered a safe haven from the city’s cholera outbreaks, Nourse and her twin sister, Adelaide, grew up in a large, devoutly Catholic family.

During Nourse’s childhood, Cincinnati blossomed into an arts center, and the teen thrived on its culturally rich atmosphere. At age 15, she enrolled in the McMicken School of Design (now the Art Academy of Cincinnati) and ambitiously pursued courses in a variety of media. Nourse eventually gravitated toward painting, which Aronson notes was held in more esteem than drawings and generally sold for more money. Although female artists in

Victorian times were often dismissed as “Sunday painters,” Nourse aspired to a serious career. “She wanted to compete on a level with men but also had to support herself,” says Aronson.

Resourcefully taking on odd jobs that ranged from illustrating magazines to sketching wealthy Cincinnatians’ homes, the artist managed to stockpile enough money to continue her training in Paris, the art capital of the 19th century. In 1887, Nourse began studying at the Académie Julian, and less than a year later, her painting “A Mother” was accepted for the Paris Salon, a prestigious show with high standards. At Salon events, thousands of contemporary paintings were displayed floor-to-ceiling in mammoth galleries, but “A Mother” snagged a spot at eye level, a rare honor for an unknown artist.

“Paintings that were hung [there],” explains Aronson, “were in the prize location for attracting attention from the public, critics and buyers.”

“A Mother” proved to be Nourse’s breakthrough painting. She became a regular Salon participant and was featured in subsequent exhibitions in England, Chicago and Washington, D.C. In the early 1900s, future U.S. president Woodrow Wilson acquired “A Mother,” and it eventually became part of Procter & Gamble’s collection. The Cincinnati-based consumer products company donated the painting to the art museum in 2003.

Nourse stayed in contact with family and friends back home in Cincinnati and kept her American citizenship, but the artist chose to remain in Paris. She routinely participated in juried shows and won numerous awards at major international exhibitions in Paris, Chicago, Nashville, St. Louis and San Francisco. In 1910, the French government honored her by purchasing her Impressionist-style oil, “The Closed Shutters” (for which her sister Louise had modeled), for its national collection. Today that painting hangs in the Musée d’Orsay in Paris.

Although she never married or had a child of her own, mothers and children were recurring subjects for Nourse. By the turn of the last century, the first wave of feminism was underway, and since the reaction was renewed reverence for traditional domesticity, many artists were producing mother-and-child paintings. While Aronson speculates that Nourse may have favored such paintings partly because she knew they would sell, her interpretations were never clichéd.

When the curator was assembling the art museum’s “Rites of Passage” retrospective, she purposely selected works that complement “The First Communion.” An obvious choice: “Peasant Women of Borst,” in which Nourse puts the simple piety of careworn people in sharp perspective. “The women in the painting are shown up close instead of being in a religious pageant as others typically painted them,” says Aronson. “The frontal figure is especially striking because she is looking right at you.”

Nourse focused on poor women and their daily rituals of work and prayer. Though a realist, she had a gift for portrayals that were sensitive but not sentimental.

“There was a kind of moral weight to the way she approached her subjects,” says Aronson. “She saw that working-class women struggled and she sympathized with them.”