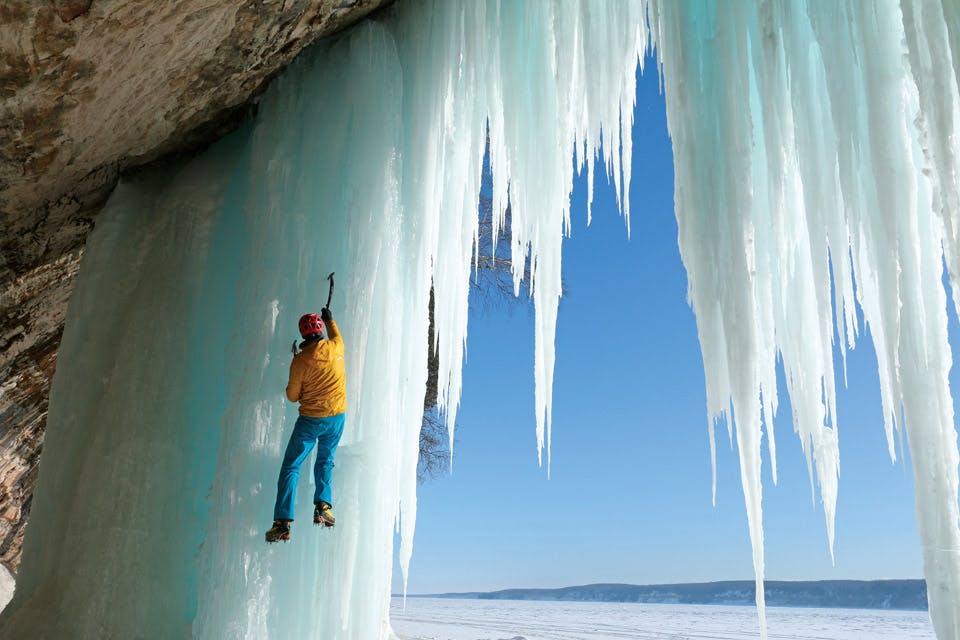 The famous adventurer talks about his role in ‘National Parks Adventure’

He has climbed the 5,000-foot vertical wall of Mount Meru in India and summited Mount Everest three times in 13 years. But for his latest adventure, American rock, ice and mountain climber Conrad Anker explored our national parks.

Moviegoers will get a larger-than-life view of Anker’s highs and lows starting Feb. 12 when “National Parks Adventure” opens on the National Geographic Giant Screen Theater at COSI in Columbus and the five-story domed Omnimax theater at Cincinnati Museum Center at Union Terminal (the Columbus version will be presented in 3-D).

Filmed with Imax cameras and narrated by actor Robert Redford, the movie celebrates the 100th anniversary of the National Park Service by immersing viewers in the wonders inherent to some of the most pristine places on Earth and telling the tale of how our national park system came to be.

We caught up with the 53-year-old Anker at his home in Bozeman, Montana, to discuss why he chose climbing as his life’s path, the most harrowing moment he’s ever experienced and what our national parks mean to him.

When did you decide that climbing was your path in life?
At about age 14, I realized I was happiest when I was outdoors, but I didn’t discover it was my path until I graduated from the University of Utah in 1988. While I was studying tourism, I participated in outdoor recreation programs, which included being a climbing guide at Mount McKinley [now Denali] in Alaska. I knew then that I needed to find a way to essentially live outdoors in adventurous places, so being a climber was the connection.

You have climbed the summit of Mount Everest three times, most recently in 2012. Thirteen years before, on your first climb, you found the preserved body of George Mallory, the explorer who disappeared there in June 1924. What was that experience like for you?
I was part of the Mallory and Irvine Research Expedition organized to discover evidence that George Mallory was one of the first to summit Mount Everest. We fanned out across the rock scree 27,000 feet high on Everest, searching an area that was the size of 12 football fields. Shortly after noon, I came across the frozen and well-preserved body of the explorer. It was a very humbling moment, to be out there and to see someone who was a predecessor to what I am doing today. You have a tremendous amount of respect for the people who have come before you.

What was the most harrowing outdoor experience you have ever undertaken?
In 1999, I was in an expedition on Shishapangma mountain in Tibet. My best friend, climber Alex Lowe, perished in an avalanche while attempting to climb the 26,000-foot peak. I was right next to him when it happened.

What led you to participate in “National Parks Adventure” from the perspective of an explorer?
Being a professional climber, I’ve done previous film work, including “The Wildest Dream” in 2010, a documentary about the discovery of George Mallory and “Shackleton’s Antarctic Adventure,” an Imax film about the British expedition across Antarctica led by Ernest Shackleton in 1914. When I was approached about doing a film to celebrate and honor the 100th anniversary of the National Park Service, I just had to say yes. As a climber, I really appreciate and feel an obligation to be a steward. The national parks are part of our collective heritage here in the United States, and the best treasures we have. It was a real treat to give back in a way that highlights the fact that the wonders of the parks are family-friendly and approachable for everyone.

What was filming like?
Very challenging. “National Parks Adventure” showcases more than 30 national parks. My part included visiting four national parks — Arches, Canyonlands, Zion and Bryce — in Utah and the Pictured Rocks National Lakeshore on Lake Superior in Michigan’s Upper Peninsula over the course of a year. The challenge with Imax is that we are shooting with film, which is different than shooting digitally. By the time you figure in the cost of the camera, each minute of 3-D costs about $2,000 to shoot, and you have to be very mindful of that. Each shot needs to be carefully set up, and the lighting must be right. Since the film has to be processed, you can’t review what you’ve just shot to see if you need to do it again.

Can you give a brief synopsis of the film?
Through breathtaking footage, the film tells the story of how the national parks came to be, starting with the camping trip naturalist John Muir and President Theodore Roosevelt took through Yosemite Valley in 1903 that ultimately led to the creation of the National Park Service. But it also tells the story of the parks today. Although we couldn’t feature all the parks, we take moviegoers on trips to many famous ones, including Yosemite, Yellowstone and the Florida Everglades. The film is as close as you can get to experiencing the parks in a natural setting without being there.

What is your role in the film?
My son Max, who is also a climber, and I traveled together as a team along with climber Rachel Pohl, who is also an artist. Together, we represented what the national parks mean to different people — from a place of unabashed thrills to solace and healing. I’m especially honored to share my passion with viewers. When you’re hanging from a cliff, up there with the birds, it’s a different world than down below. You feel very much a part of nature and live fully in the moment.

What is your most memorable moment in the film?
Visiting the Pictured Rocks National Lakeshore in Michigan’s Upper Peninsula for the first time. It was a real treat for us to climb up a frozen waterfall and explore hidden ice caves that looked like scenes from fairy tales.

Which national park do you consider the most unusual?
I have to say the Everglades. Since I’m a mountain climber, the park is unique to me because, with its wetlands and mangroves, it has a different biosystem and ecosystem to the ones I’m used to. The most unusual national monument I visited for the film is Devils Tower. It’s a geologic anomaly that rises up in the middle of the Pine Ridge area of Wyoming. Whenever I’m there, I feel a spiritual connection with the Native American tribes who have held the land sacred for centuries.