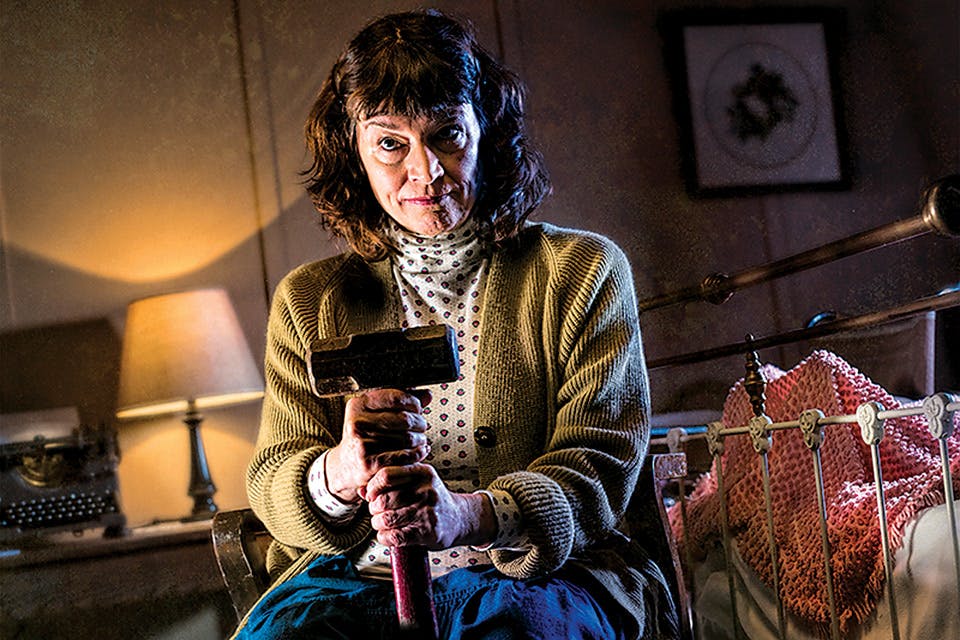 As Cincinnati Playhouse in the Park prepares to bring Stephen King’s chilling 1987 novel to life, we talk to those tasked with re-creating Annie Wilkes’ warped world on stage.

The invitation from Blake Robison, artistic director of Cincinnati Playhouse in the Park, arrived in Barbara Chisholm’s email inbox several weeks before Christmas. Last summer, the Austin, Texas-based actress delighted audiences there with her one-woman show, “Erma Bombeck: At Wit’s End,” a loving tribute to the distinguished Dayton columnist. She’d enjoyed her time at Playhouse in the Park, and hoped to tread the boards there again soon. But the role Robison was asking her to take on — that of maniacal Annie Wilkes in the stage version of Stephen King’s novel Misery — was one she did not immediately embrace.

“I’m a real weenie,” the actress says with a laugh. “The only Stephen King story I’ve read is The Shining, which, although it was fantastic, gave me heart palpitations because it was so traumatic. The film ‘Misery’ is so well known that, of course, I’ve seen clips through the years, but I’m definitely not a student of the genre.”

Yet as Chisholm began reading the script of the play, which will be staged at the theater Sept. 1 through 29, she became engrossed in the magnitude of power Wilkes wields.

“It’s a pretty common trope in literature for damsels in distress to be held captive,” Chisholm says. “But this story turns that on its head. The female has all the control here, and it’s the man who’s powerless and in danger. The character description of Annie is that she ‘is like no one else on this or any planet.’ Now that’s something that as an actor you read and say, ‘Ooh, I’d like to play that.’

“There was no way I was turning this down.”

Penned by best-selling author Stephen King and published in 1987, Misery has earned iconic status in the annals of psychological horror/thriller pop culture. The story centers on Paul Sheldon, a writer of romance novels featuring a character named Misery Chastain. When Sheldon is seriously injured in a car crash in Colorado, he’s rescued by Annie Wilkes, a deranged fan who holds him captive in her isolated house and repeatedly torments him after learning Misery dies in Sheldon’s latest book. The only way out for the author: Write his deceased heroine back to life in a way that meets with Wilkes’ unhinged approval.

In 1990, William Goldman, who won Academy Awards for his screenplays of “Butch Cassidy and the Sundance Kid” and “All the President’s Men,” adapted the novel. The movie version, starring Kathy Bates and James Caan, yielded a best actress Oscar for Bates. The “hobbling” scene, in which Wilkes smashes Sheldon’s ankles with a sledgehammer, is ranked No. 12 on Bravo’s list of 100 Scariest Movie Moments.

Three years ago, “Misery” opened on Broadway with Bruce Willis and Laurie Metcalf in the principal roles. Although Goldman also penned the stage version, the reviews were lukewarm. New York Times theater critic Ben Brantley dissed the production for having “a lack of shivers.” Marilyn Stasio panned the play in Variety because “the eek! factor was largely missing … and the atmosphere of fear and dread was just wiped out by the show’s undercurrents of arch humor.”

Cincinnati Playhouse in the Park’s Robison is unfazed by the barbs.

“I haven’t seen a production, and I think that’s an asset because I can come to it fresh,” he says. “The reviews don’t worry me. They confirm what I already think, which is that you can’t treat this material as campy or tongue-in-cheek.

"[The script] requires tension and conflict between the two principal actors. They have to approach their roles and the given circumstances of the play with absolute conviction. If you start hamming it up ... you deflate the balloon, and all the tension goes right out of it.”

“This is a story about two human beings,” Robison says. “There’s no supernatural element, and in that regard, it’s reminiscent of some of the great stage thrillers of the 20th century — productions such as ‘Wait Until Dark,’ where you’re waiting to see what’s going to happen to the young blind woman when the bad guys start to break into her apartment.

“‘Misery’ has that kind of human tension to it, so our production is going to focus very clearly on the story as a psychological stand off between two people. … We’re going to dig into these characters and allow the danger and thrills to come from the interaction of these two actors. As Erma Bombeck, Barbara was very buoyant and chipper, and I felt like if we could give her permission to tap into that side and marry it with Annie’s dark side, you would have a character of terrifying depth on stage.”

David Whalen, who has starred in Playhouse in the Park productions of “Shakespeare in Love” and “A Prayer for Owen Meany” will portray Paul Sheldon. Robison credits him with being able to create “just the right blend of cockiness and bravado called for that is then challenged by his physical and psychological circumstances.”

Cincinnati resident Paul Shortt, who’s designed sets for more than 50 Playhouse in the Park productions, crafted Wilkes’ artfully realistic homestead, which consists mostly of a bedroom, parlor and kitchen on a turntable that rotates as the show’s two main characters make their way from room to room.