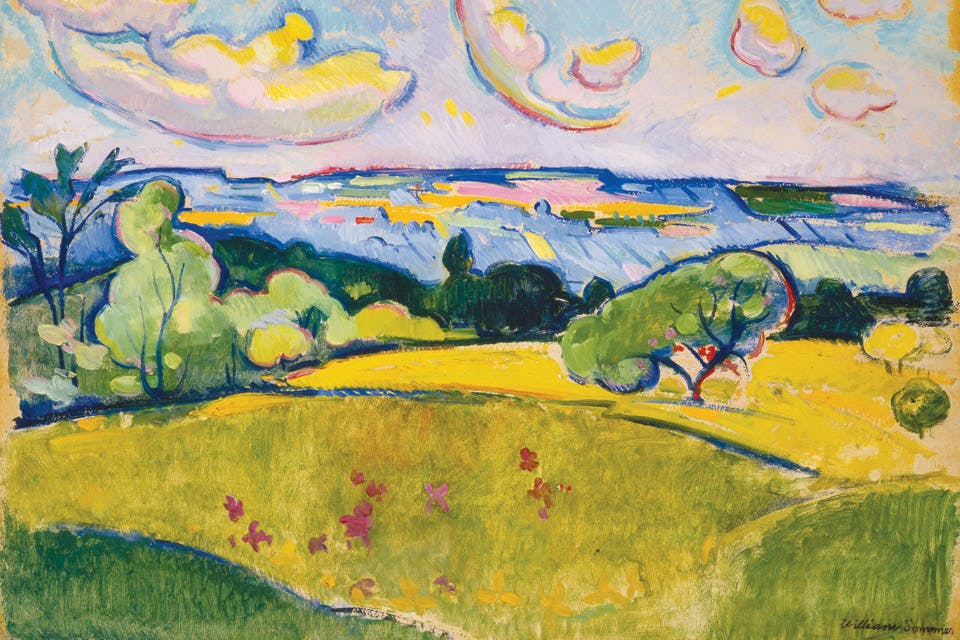 ‘The Museum Collection’ at the Akron Art Museum

Homegrown artists shine in an Akron Art Museum exhibition highlighting works from the museum’s permanent collection created between 1850 and 1950.

Of the nearly three dozen superb portraits, landscapes and still lifes hanging in the Akron Art Museum’s McDowell Galleries, chief curator Janice Driesbach declares “Landscape with Yellow Clouds” by Ohio artist William Sommer to be a favorite — especially at this time of year.

“We’re in the midst of our very gray, dreary winter climate right now,” she says. “So part of what I enjoy about this is its lively color and the sense of joy in the landscape.”

The Akron Art Museum is featuring Sommer’s 1915 painting as part of “The Museum Collection.” The aptly titled exhibition, on display through the end of 2017, highlights oil paintings and watercolors by Ohioans and other artists whose work spans from 1850 to 1950 — the decades that form the bedrock of the museum’s acquisitions.

It is, the curator adds, also fitting that the collection is displayed in the museum’s oldest gallery. Connected to the Akron Art Museum’s futuristic main building, which opened in 2007, the Italianate Renaissance revival structure initially served as Akron’s main post office. The building became the art museum’s home in 1981.

The interior features deep-red brick walls laid in a Flemish Bond pattern with limestone trim. Pairs of carved eagle medallions and bronze lanterns decorate the building’s exterior, and a mosaic depicting a Pony Express rider is embedded in the lobby floor — all architectural details that serve as a rich backdrop for the period being showcased.

“Like many artists of his day, Sommer was affected by the invention of photography, which was introduced in 1839,” Driesbach says. “The fact that a camera could take an image of something with precision that was instantaneous served as incentive for many artists to pursue directions that were more interpretive and expressionistic.”

The curator cites “Landscape with Yellow Clouds” and Sommer’s later “Bordner Mural,” which he completed in 1937, as examples of the abstractionist movement he embraced.

Born in Detroit in 1867, Sommer left school at 14 to learn commercial lithography. In 1907, he accepted a position with the Otis Lithograph Co. in Cleveland. Four years later, he co-founded the northeast Ohio branch of the Kokoon Arts Club, a Bohemian artists group dedicated to promoting modernism.

After moving to the Ohio village of Brandywine in 1914, the artist added watercolor to his palette and found new inspiration in music and literature.

“Sommer was one of a number of artists working in Cleveland who were attuned to the contemporary art of their time,” Driesbach explains. “For ‘Landscape with Yellow Clouds,’ he chose intensified emotional colors that are somewhat unnaturalistic — from the pink on the hillside to the brilliant yellow of the fields. 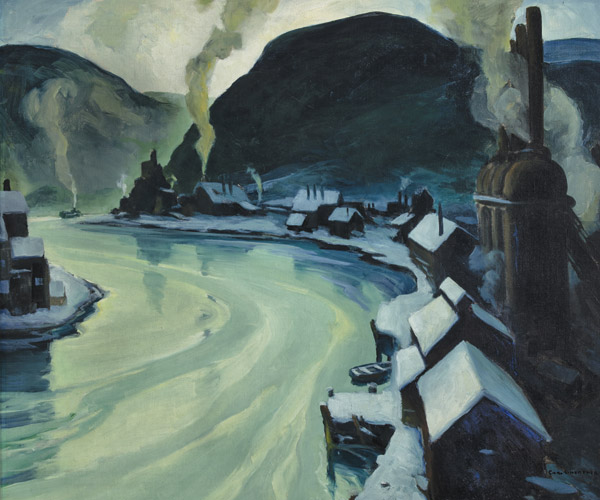 “And, like postimpressionists Vincent van Gogh and Paul Gauguin, Sommer doesn’t draw every blade of grass or every leaf on a tree. Instead, we see simplified forms, yet still get the sense of three dimensions — foreground, middle ground and background — at the same time.”

Sommer’s “Bordner Mural” reflects the fanciful approach the artist infused much of his later work with. A collaboration between Sommer and his son Edwin, the painting was commissioned by Ruth Bordner as a birthday present for her husband Robert, a newspaper writer and close friend of the Sommer family. The image is thought to represent the property the Bordners owned in nearby Peninsula.

“Sommer’s modernist impulses are clearly evident here,” Driesbach says. “In addition to the heightened color scheme he’s known for, the artist took a very innovative approach to lines, not only in painting the rays of the sun, but also in the silhouettes of the horses and cows.”

Artist Carl Gaertner took a much grittier approach in his work. Born in 1898, the Cleveland native spent his entire life in northeast Ohio, first attending, then teaching, at the Cleveland School of Art (now known as the Cleveland Institute of Art) from 1925 until his death in 1952.

Although Gaertner’s subject matter included rustic farms and windswept lakeshores, industry was a prevailing theme. Blast furnaces and the outbuildings surrounding a steel mill are focal points in his 1928 oil painting “Riverside Plant.” Encouraged by art critics to highlight the Midwest’s burgeoning industrial economy, Gaertner and his contemporaries were challenged by how to portray the subject in fresh ways. Here, the artist opted to incorporate rich jewel tones into his work and depict the site covered in snow.

“Like Sommer, Gaertner is someone who painted largely in landscape, but it’s a realistic depiction of the landscape he knew best,” Driesbach says. “Although there’s a sense of celebration and beauty in the composition of this painting, there’s also a sense of the impact industry is having. We see the soot and grime that is implicit in the subject matter.” 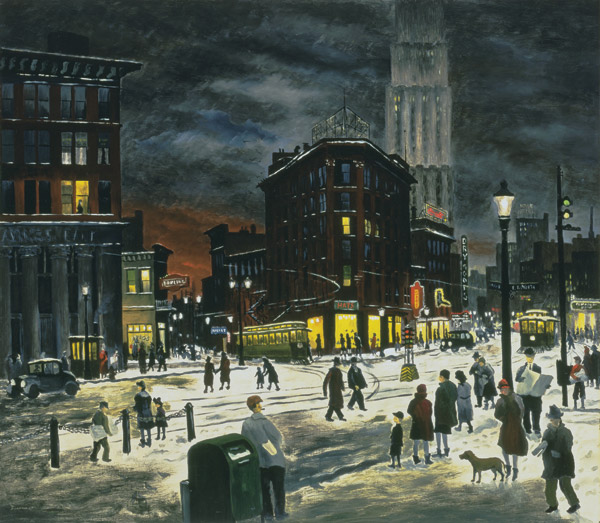 Raphael Gleitsmann created “Winter Evening” in 1932. Although painted during the height of the Great Depression, the energetic cityscape is bustling with pedestrians and streetcars. (artwork courtesy of Akron Art Museum)

The city of Akron served as a colorful muse for Raphael Gleitsmann. The artist developed his style by studying the work of Edward Hopper, who was revered for his realistic portrayals of American life, and American scene painters Thomas Hart Benton and Grant Wood, who replicated glimpses of the rural Midwest.

A Dayton native, Gleitsmann’s family moved to Akron in 1916, when he was 6. The artist’s 1932 rendition of “Winter Evening,” featured in the exhibition, clearly serves as a love letter to the Rubber City. Although painted during the height of the Great Depression, the energetic cityscape is bustling with pedestrians and streetcars. Driesbach notes that although the artist’s youth and inexperience are evident in the rough handling of figures and structures, his use of mostly muted blues and greens splendidly conveys the encroaching darkness.

“Light from the setting sun adds distinctive radiance to the ambiance,” the curator says. “It captures the activity in a pretty wonderful way.”

Driesbach pauses before “The Artist and His Wife,” Elmer Novotny’s 1938 oil painting depicting he and Virginia at their home in Kent, Ohio.

“They were quite the couple in their day,” the curator says. “Looking at this painting, you very much get the sense that if you were to run into them in a restaurant in downtown Kent, you would immediately recognize them.”

The Cleveland native began his art career in 1922, executing his first portrait commission at age 13 under the direction of his father, an amateur artist. Novotny is known for his sympathetic portrayals of workers and working-class families during the 1930s.

“Art museums can be very intimidating places,” Driesbach says. “But this exhibit captures glimpses of life we all can identify with.”