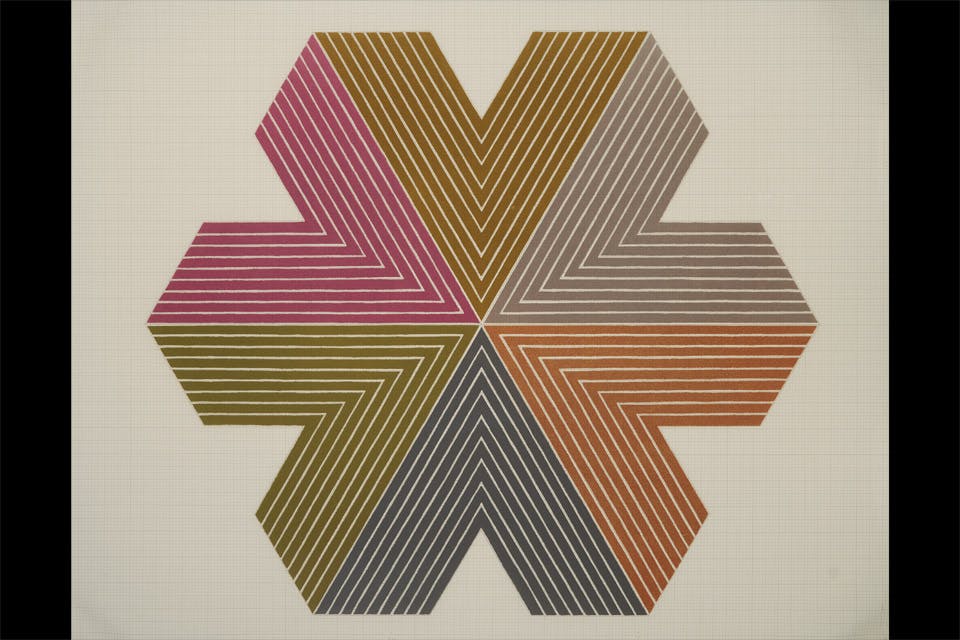 Columbus art collector Ron Pizzuti became familiar with Frank Stella’s work in the 1970s. His museum features a selection of the artist’s vibrant compositions through April 29.

Ron Pizzuti was bored. He’d spent most of his European vacation in 1971 touring cathedrals and checking out the local color in neighborhood watering holes. So for a change of scenery, he wandered into an art gallery in the Montmartre section of Paris.

“The only time I’d ever been to a museum was during a field trip in school,” recalls Pizzuti, now chairman of The Pizzuti Companies, the Columbus real-estate development firm he founded in 1976. “As I walked into the gallery, I spotted this beautiful painting of a protractor in Day-Glo colors by Frank Stella. I couldn’t take my eyes off of it.”

It didn’t take Pizzuti long to become smitten with the challenging abstracts and expressionist forms of contemporary artists. Over the next four decades, he began amassing an assemblage of work comprising more than 2,000 oil paintings, photos, drawings and sculptures. Five years ago, he and his wife, Ann, opened the Pizzuti Collection, a museum in Columbus’ Short North Arts District that showcases the couple’s collection.

Through April 29, the museum is presenting “Lines/Edges: Frank Stella on Paper,” which features 22 of the 81-year-old abstract artist’s works spanning 1967 through 1994.

Although past exhibitions at the Pizzuti Collection have focused on artists from India, Cuba and London, it’s Stella whom the developer credits with igniting what would become his full-blown passion for cutting-edge art.

“I’ve gotten to know Frank Stella over the years as a person,” Pizzuti says. “I have so much respect for anyone who can reinvent himself over and over as he has.

“Actually,” the developer adds with a chuckle, “I see a little bit of Stella in me.”

Known for his work in the area of minimalist images featuring geometric abstractions and nonrepresentational paintings focusing on line, plane, volume and point, Stella remains dedicated to bringing the basic elements of art — color, shape and composition — to life in rudimentary ways.

“What I love about his work is that while it might look minimal, there is incredible thought behind it,” says Greer Pagano, the Pizzuti Collection’s chief curator. “Frank Stella is one of the smartest contemporary artists working today.”

Born in Malden, Massachusetts, in 1936, Stella attended Phillips Academy in Andover before enrolling at Princeton University where he painted and majored in history. Early visits to New York galleries influenced his burgeoning artistic development. Stella’s work was recognized for its innovations before he reached age 25.

“Frank Stella is a man of many, many styles,” says Richard H. Axsom, senior curator emeritus at the Madison Museum of Contemporary Art in Wisconsin and author of The Prints of Frank Stella: A Catalogue Raisonné, 1967-1982. “It continually evolves over time, beginning with works based on pristine geometry and gradually became more colorful, energetic and expressionist. Each shift he’s gone through is just breathtaking.”

In the early 1960s, major American painters began engaging in printmaking techniques to enhance their artistry, and Stella was no exception. He collaborated with master printer Kenneth Tyler to generate a series of lithographic prints, including those based on his previous paintings titled “Black Series I” and “Black Series II.” Stella created the pinstriped lines on them by painting around a white canvas. He purposely placed designs off-center in order to establish elements of tension meant to challenge the eyes of viewers.

“Unlike other abstract artists, Frank does not create untitled works,” Axsom says. “They reflect his political concerns and his passion for history, music and literature. He has an encyclopedic imagination.” 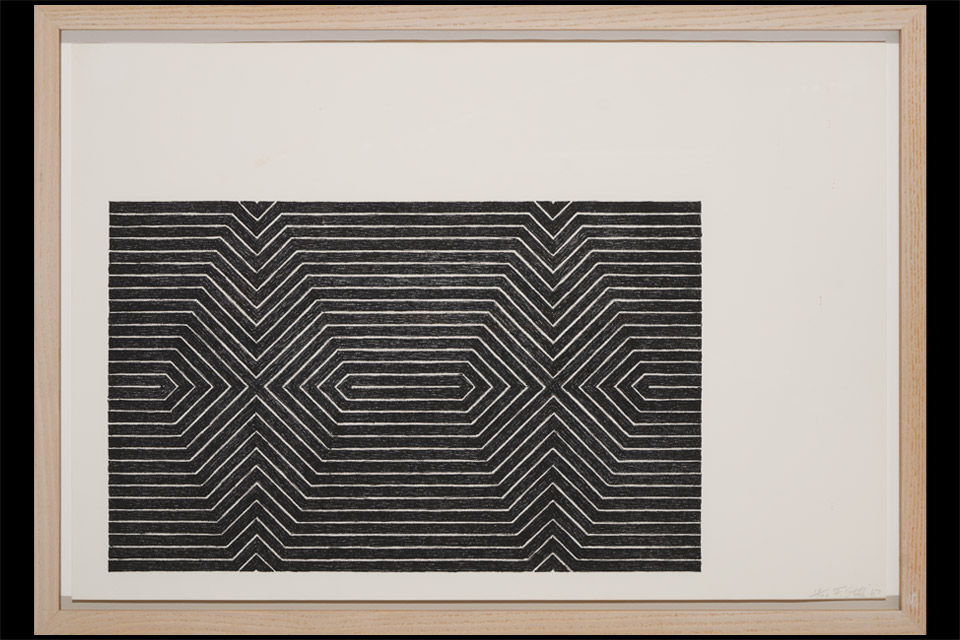 “Turkish Mambo,” part of “Black Series II,” pays homage to a jazz composition recorded by pianist Lennie Tristano in 1955. Much like the fluid time signatures Tristano used to lend complexity to the piece, Stella was committed to making the lithograph honor its namesake by infusing touches of the unexpected.

“There’s a logic to the diamond-shaped designs in this print that seems so predictable and precise,” Axsom says. “But this image is a lot like the op-art of the ’60s. It teases the eye. If you continue looking, you’ll see the sense of clarity is complicated by a sense of disorder, and the two senses play back and forth with each other and begin to pulsate. Like a Bach fugue, nobody says what ‘Turkish Mambo’ is supposed to be. It just tugs at you and holds you there.”

Named after a 19th-century British clipper ship and patterned after its hull, “Star of Persia I” is a lithograph which Stella completed in 1967, featuring the chevron — or V-shaped design — that Axsom likens to the swiftness the vessel was known for.

“Once again, we see those pinstripes,” Axsom explains, “only this time, Stella creates a series of V’s that serve as building blocks for shapes associated with nautical themes, such as stars and arrows that represent direction.”

Stella read Herman Melville’s classic tale Moby-Dick in his youth. But, explains Robert K. Wallace, professor of English at Northern Kentucky University, although Stella would eventually create work based on the book, he was initially not impressed by the story of a ship captain’s obsession with a white whale. It was only after visiting an aquarium with his young sons a few decades later that Stella began seriously reflecting upon the novel he’d shunned.

“He became fascinated by the beluga whales and thought their shapes resembled waves,” says Wallace, who also authored Frank Stella’s Moby-Dick: Words & Shapes. “That aquarium visit came at a time in Stella’s life when he felt abstraction art was coming to a dead end. He felt you can only go so far if you avoid any relationship with what nature actually looks like.”

In his book, Wallace includes a passage from an interview Stella gave to the New York Times in 1989, in which he describes how the idea to create images based on the book took hold: “…the idea of the whale reminded me of Moby-Dick, so I decided to go back and read the novel, and the more I got into it, the more I thought it would be great to use the chapter headings of the novel for the titles of the pieces.” 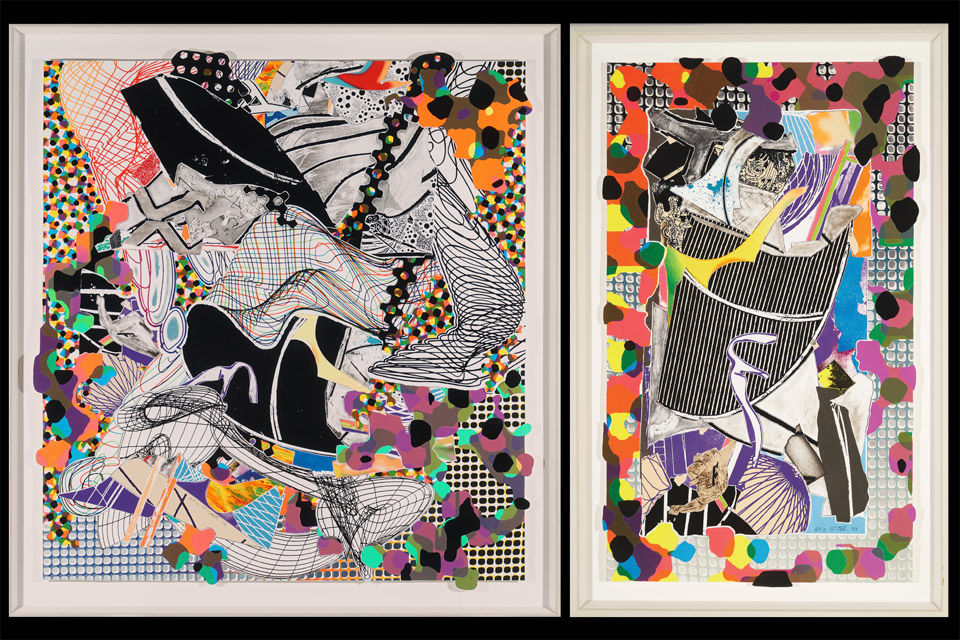 To celebrate the story, Stella created 266 works of art ranging from large metal reliefs and prints to sculptures and a mural. Nine deckle-edge lithographs from Stella’s “Moby-Dick” series that he created in 1993 are featured in the Pizzuti Collection exhibition. “The Pequod Meets the Jeroboam. Her Story” is filled with riotous bursts of color surrounding the whale shape that’s at the center of the design. For “The Battering Ram,” Stella patterned the collage of bubbles in the image after a woodblock triptych of a whale created by 19th-century Japanese artist Kuniyoshi Ichiyusai.

“Frank Stella is still influential on new generations of abstract artists and remains a force to be reckoned with,” Axsom says. “He’s in good company with Beethoven and Shakespeare. After seeing Stella’s work, one leaves it with a sense of optimism for human beings.”