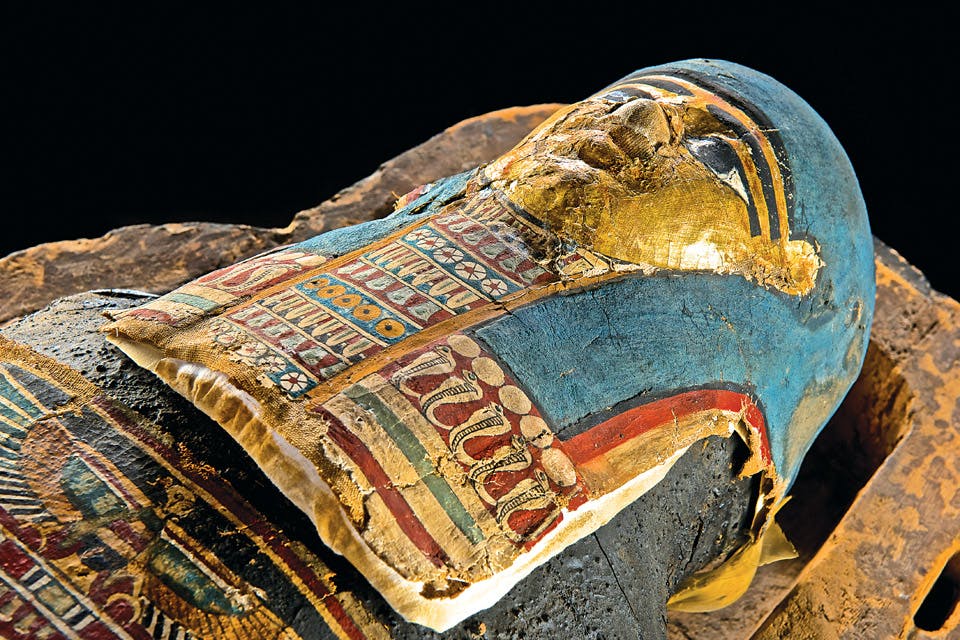 The Cincinnati Museum Center explores the ancient world of mummies and the windows they provide into the past.

Heather Gill-Frerking knows most of us associate her favorite kind of people with creature features and Halloween soirees. But to the New Hampshire-based scientific researcher and anthropologist behind “Mummies of the World,” currently on display at the Cincinnati Museum Center, meticulously preserved humans are far from creepy.

“They give us fascinating insight into ancient times,” says Gill-Frerking, who curated the traveling exhibition. “Mummies are, in effect, sharing their lives.”

Through April 26, the museum is exploring the link between them and us by showcasing 45 human and animal mummies from around the world and 150 accompanying artifacts.

“Mummies tell us their stories, and it doesn’t take long for us to understand that these people are exactly like us,” the anthropologist explains. “They had jobs. They had families. They had illnesses. They were just ordinary, everyday people living their lives. Only they were doing it 500 or 1,000 or 2,000 years ago.”

The idea for the exhibit — produced by Florida’s American Exhibitions Inc. — was sparked in 2004, after researchers at the Reiss-Engelhorn-Museen in Mannheim, Germany, happened upon a collection of mummies stored in an overlooked vault.

As the scientists researched the museum’s collection, they invited others to share expertise. “Mummies of the World” was developed in collaboration with 21 museums in seven countries.

“The Egyptians had the best public relations,” Gill-Frerking says with a smile. “We’re very familiar with the sarcophagi that were elaborately and ritually prepared for their journeys to the afterlife.”

But, she adds, mummies come from every continent, including South America and parts of Europe. Gill-Frerking cites the earliest examples as being from Chinchorro (now northern Chile and southern Peru) and dating back 7,000 years.

“Townspeople mummified just about everyone so they could keep their relatives close by to consult them for advice,” Gill-Frerking says. 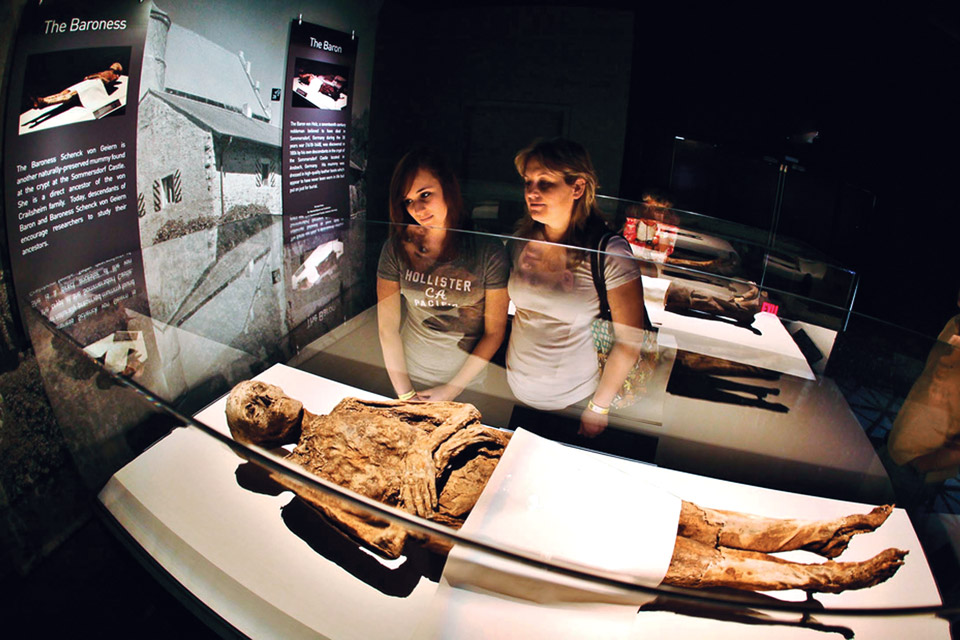 The exhibition features preserved bodies that have been found in peat bogs in the Netherlands, and in the extremely arid climate of South America. An array of animals has also been discovered: Beloved pets, including cats, dogs, crocodiles and llamas, were often placed in the tomb to keep their owners company.

Over the decades, breakthroughs in medicine have revolutionized the way mummies are studied, making it possible to explore their lives without unwrapping or disrupting them.

“We can take an 8-inch strand of hair from a mummy and see what they ate for the last few months of their life,” Gill-Frerking says. “If their diet was sea-based, we know they came from a coastal area.”

Church baptism and burial records, she adds, have also yielded valuable information about some of the subjects on display. Visitors to the exhibition will meet Michael and Veronica Orlovits, an 18th-century couple discovered in 1994 in a long-forgotten crypt in Hungary. Michael, who died in 1806 at age 41, worked as a miller, grinding grain into flour.

“CT scans show that Michael had a very bad fracture to his lower left leg that hadn’t healed prior to his death. ... His left leg is shorter than the right, which means he would have walked with a limp and been in a substantial amount of pain. You can’t help but wonder what his life was like,” Gill-Frerking says.

Through DNA analysis, scientists determined that Veronica, a mother of three, suffered with tuberculosis, which may have led to her death at age 38.

“We think of TB as a disease that no longer exists,” the anthropologist says. “But it is still very prominent ... and it’s getting angrier and becoming drug-resistant. The secrets Veronica’s body holds provide valuable clues to how the strain of the disease has changed over time.”

Objects on display also provide an impressive backdrop. They include dozens of shabtis, figurines which were placed in tombs to act as servants to the deceased in the afterlife.

“They’re the ones who would do all the work for you on the other side,” says Gill-Frerking. “The richer you were, the more you had. As many as 300 were found in some tombs.”

Pages from the Egyptian Book of the Dead have also proven popular with museumgoers. The ancient text, commonly written on papyrus, comprises a collection of hymns, spells and instructions to aid in navigating the hereafter.

“We recognize that our own mortality is inevitable, but it’s not something we talk about in our society or are comfortable with when it’s glorified in films,” Gill-Frerking reflects. “The mummies in this exhibition give people a safe way to explore the taboo of death.”