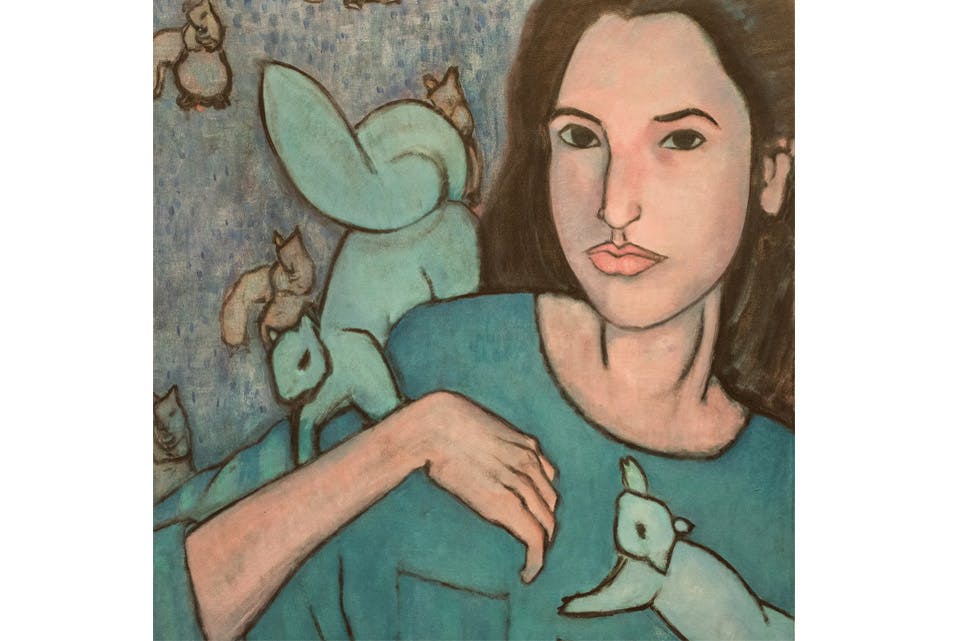 From a family frolicking on the beach during the 1940s to a street scene inspired by the ’60s, Columbus oil painter Michael Weisel’s artwork offers a glimpse into the life he’s lived and the people he loves. Fourteen of the artist’s oil paintings and eight of his drawings are on display at the Zanesville Museum of Art through March 21. “Constructing Meanings: The Paintings of Michael Weisel” is the first solo exhibition for the 68-year-old artist, who picked up a paintbrush 12 years ago after a two-decade hiatus. We talked with Weisel about where he finds inspiration, how he approaches the canvas and why blue is a favorite color.

Does this first exhibition represent a turning point for you?
Yes, it is an exciting, fun and exhilarating time. It’s also an ideal example of how things in life just fall into place. A friend who owned the Grandview studio I work in introduced me to the staff at the Zanesville Museum of Art. I have spent so many years focusing on painting that I haven’t paid much attention to the business side of art.

You earned your veterinary medicine degree in 1980 and have a practice in Columbus. When did you become passionate about oil painting?
I always had an interest in it. Back in the ’70s, my wife and I went to visit my parents on Long Island, and I decided to take some drawing courses at The Art Students League of New York. It didn’t take long for me to fall in love with what I was doing. From there, we moved to England, where I spent a year studying at Canterbury College of Art. But I never actually saw myself making the career choice to become a painter. Instead, I focused on animal care, which was also important to me.

Why did you decide the time was right to start painting again?
I was working and helping raise my two children. Life was so full and took so much attention and energy that there really wasn’t enough time for anything else. But I always had it in the back of my mind that, at some point, circumstances would provide the opportunity to reconnect with painting — the other part of my life. And that happened 12 years ago, after my first marriage ended and my children were grown. I met a fellow artist who had studio space. We got to talking, and I went to look at his studio. It just struck me that it was the right time to begin again.

What sparks your creativity?
I take inspiration from all of the things that really encompass my life. We live with seven felines, so it’s hard not to find cats in my paintings. Relatives also make an appearance. I study old photos and challenge myself by mixing eras and styles on the same canvas. My 2010 triptych, “Composition in Blue and White,” includes an early image of my father, who emigrated from Eastern Europe in the 1920s, juxtaposed with my aunt and my daughter when she was young. “Composition with Squirrels” recalls the afternoon my daughter came home from middle school with one tucked in her backpack.

You mentioned that you like the idea that a work can take on a life of its own. How does that belief shape your process?
Usually, when I’m working on a painting, I take a photograph of it every couple of days to chart the progress. My canvases are wall-size — 48 inches by 60 inches — and take about a month to complete. So, it’s interesting to watch the painting change. As I add color, I start to react to what’s in front of me. I’m always open to what the painting offers, even if it takes me in a different direction than what I originally intended. As a painter, you have to trust yourself. You may look at what you’re doing and say, “I know I don’t like that.” And then, you have to be willing to stick your neck out, even if it looks OK, and say, “I’m going to take that out of there and start over.” After all, the point of the painting is not to get to the finish. The point of the painting is to make a good painting. Originally, in “Urban Exterior,” I planned on having a woman hold the child’s hand instead of the man — who represents my father walking with my sister.

Blue predominates your work. Why do you have such an affinity for that color?
I do love blue. I also gravitate toward greens and pinks. They create a kind of mood that people who see my work tell me is comfortable for them. But the simple answer is: I just like the colors.