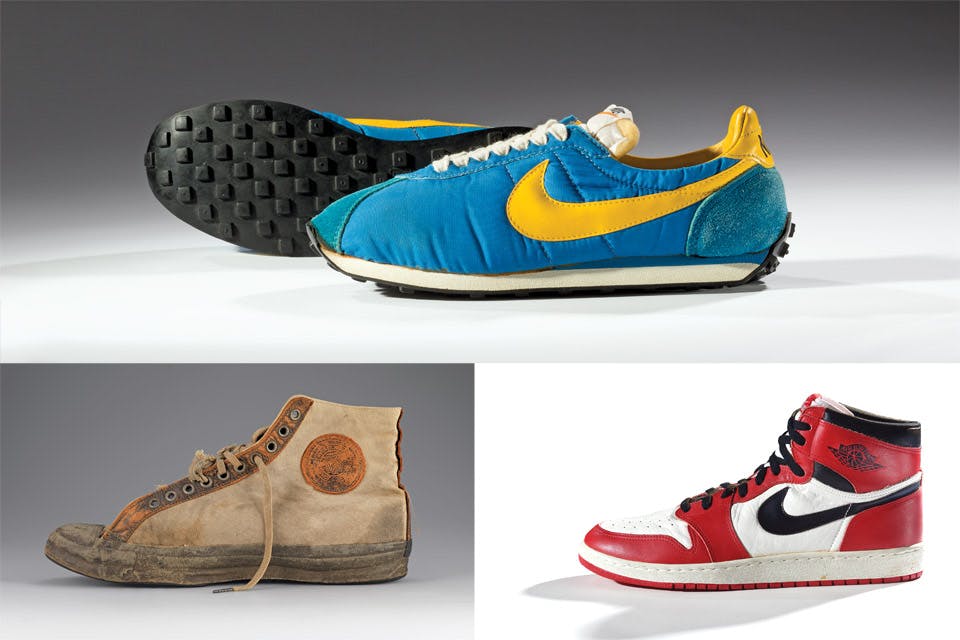 From Converse All Stars to Nike Air Jordans, sneakers have evolved from their 19th-century origins to become international icons of style. “The Rise of Sneaker Culture,” a traveling exhibition organized by the American Federation of Arts and Toronto’s Bata Shoe Museum, provides a comprehensive survey of sneaker history, showcasing 160 pairs of shoes. We asked Halona Norton-Westbrook, Mellon Fellow at the Toledo Museum of Art, where “The Rise of Sneaker Culture” is showing through Feb. 28, to walk us through some of the footwear on display.

1830s: Pre-vulcanized Rubber Overshoe
This precursor to sneakers cost five times the price of leather shoes of the time, but it was a fashion statement that wouldn’t last. “They weren’t that practical, being an early form of manufactured rubber,” says Norton-Westbrook. “In the summer, they would not stand up to the heat.”

1985: Nike Air Jordan I
Air Jordans have become a cultural force  during the past three decades, spawning collectors around the globe. “Those really changed the sneaker game,” Norton-Westbrook says. But they originally created some NBA controversy. In 1985, Michael Jordan was fined $5,000 for each game he wore a red-and-black-only version of his signature shoes because they lacked the color white, which NBA uniform guidelines required for Chicago Bulls players.

2011: Adidas/Run-D.M.C. 25th Anniversary Superstar
Run-D.M.C. made history in 1986, when it became the first hip-hop group to get a major sneaker deal, garnering a $1 million endorsement from Adidas. In tandem with the rise of Air Jordans, it set the stage for the multimillion-dollar deals that continue today. A 25th anniversary edition of the shoe Run-D.M.C. made famous is on display in Toledo. “[The exhibition] looks at not only the evolving aesthetics ... but also references some of the larger social and cultural phenomenon going along with the rise of sneaker culture,” says Norton-Westbrook.

For more information about “The Rise of Sneaker Culture,” visit toledomuseum.org.