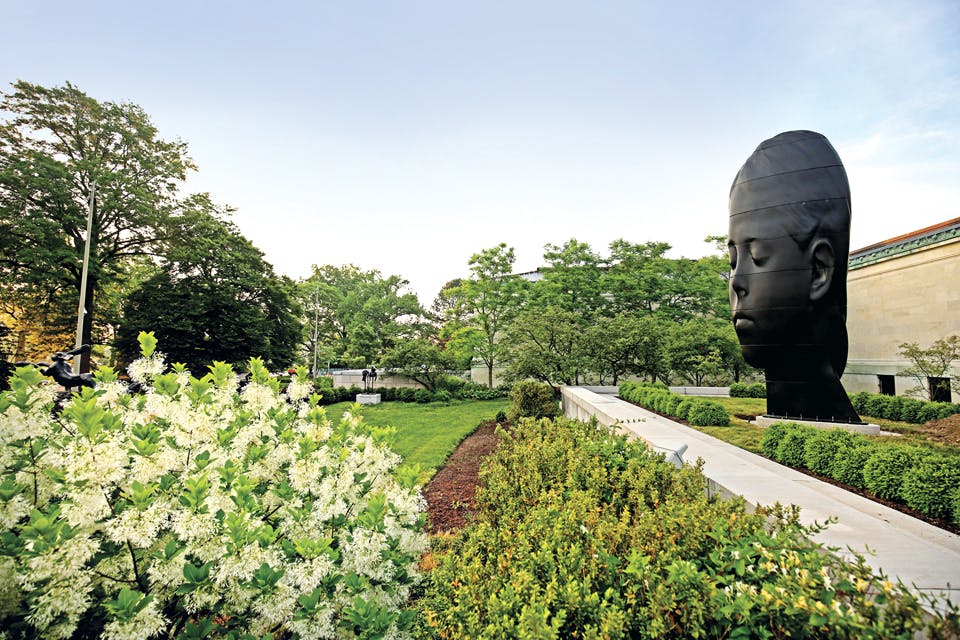 The Toledo Museum of Art showcases large-scale sculptures and other works by the renowned artist.

With her eyes closed and lips pursed, the large head of “Paula” faces the sidewalk that runs along the Toledo Museum of Art’s main building. The massive bronze sculpture realistically mimics the calm expression of a woman at rest and shows the humanity that infuses Spanish artist Jaume Plensa’s work.

“He is very clearly tied to the figure,” says Amy Gilman, associate director of the Toledo Museum of Art. “He never completely lets that go, whether it is the full body or just a single head. He uses that as a way of signaling that the sculpture is not divorced from the humanness that created it.”

Works by the Barcelona native are on display at the museum through Nov. 6 in the exhibition “Jaume Plensa: Human Landscape.” It includes nine indoor sculptures, 18 drawings and six etchings, as well as six large-scale outdoor sculptures and sculpture groups. The indoor works showcase ghostly images and faces that appear as if they are rising out of the paper, complementing the graceful beauty of Plensa’s outdoor works.

“They are definitely of a piece,” says Gilman, explaining that the exhibition shows humans immersed in different environments.

“One of the beautiful things about Plensa’s sculptures is that, while the material is very heavy and in many ways unforgiving, his sculptures do not appear that way,” adds Gilman. “They have a fairly ethereal quality to them.”

The outdoor pieces demand a particular attention to the space in which they are displayed, so Plensa decided where each should be installed on the museum’s 36 acres.

“He came here and walked the grounds ... and has really determined the final locations of each of the pieces,” says Gilman.

She adds that one of the benefits of hosting this traveling exhibition of Plensa’s works is that the show is inviting and accessible while presenting pieces in both the traditional gallery setting as well as outdoors.

“We wanted to have a show that would really be appealing to a broad audience,” Gilman says. “I hope people explore the museum and the grounds in ways that they haven’t before.”

For more information about this exhibition, visit toledomuseum.org.