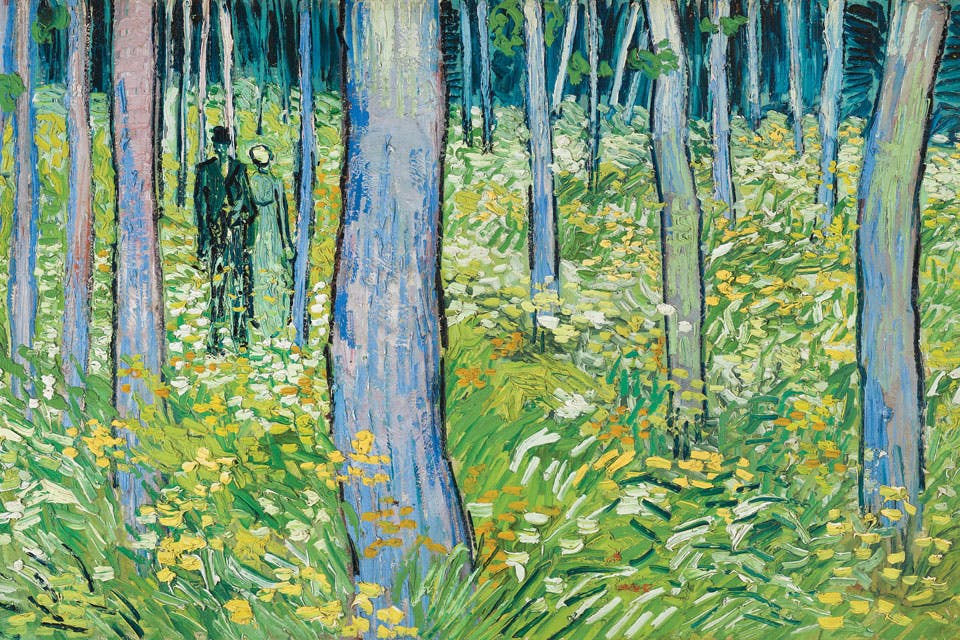 The Cincinnati Art Museum showcases the forest through one of Vincent van Gogh’s final paintings and two dozen other works.

Dutch painter Vincent van Gogh arrived in the French village of Auvers-sur-Oise in May 1890 a broken man. The mental collapse and subsequent hospitalization he’d experienced the year before had taken a shattering toll, leaving behind a tortured soul who seesawed between rationality and senselessness.

And yet, says Julie Aronson, the Cincinnati Art Museum’s curator of American paintings, sculpture and drawings, it was in the two months that followed — which culminated in a self-inflicted gunshot wound that ended his life on July 29 — that the 37-year-old created some of the most complex landscapes of the postimpressonist movement.

“On the one hand, there was a certain sadness to this last phase of van Gogh’s life because he was struggling so much with mental illness,” Aronson says. “But he also experienced times of great lucidity. In fact, this was really one of van Gogh’s most fertile periods as an artist. He worked very feverishly, creating spectacular wooded landscapes that are unlike any others he ever produced.”

From Oct. 15 through Jan. 8, the Cincinnati Art Museum is presenting “Van Gogh: Into the Undergrowth,” an exhibition comprised of 25 paintings — nine by van Gogh and 16 by artists who influenced his life and work. 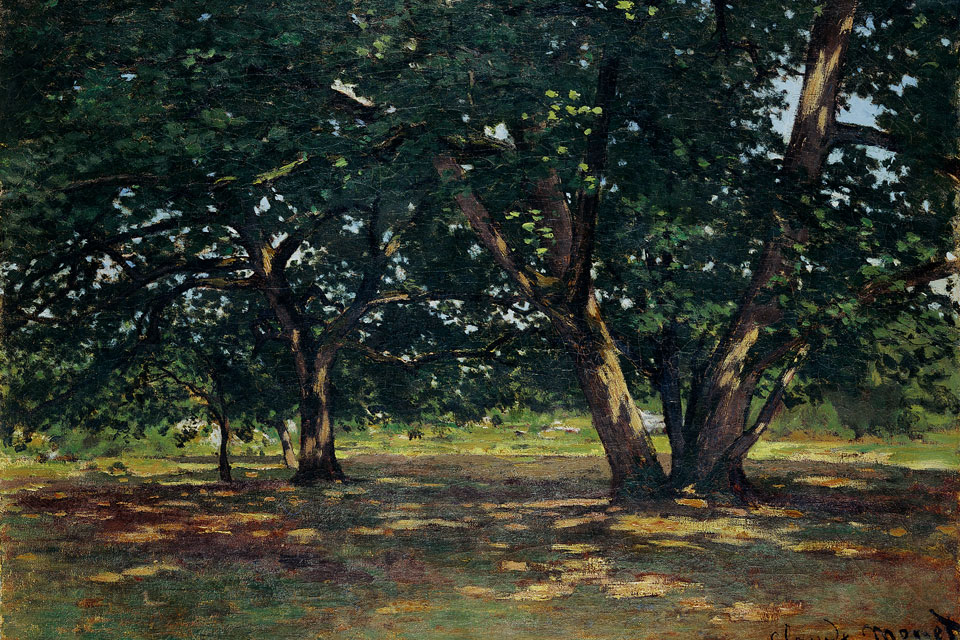 The focal point of the exhibition is van Gogh’s “Undergrowth with Two Figures,” which the artist completed in July 1890 and the Cincinnati Art Museum acquired in 1967. In a letter to his brother, Theo, van Gogh described the structure and brilliant use of color in the oil painting, explaining that, “the purple poplars function as columns that cross the landscape perpendicularly.” The faceless couple he placed in the middle of the canvas is reminiscent of the motifs of lovers van Gogh featured in previous works.

“Where impressionist painters were more interested in such optical effects as the way light filters through the woods, postimpressionists like van Gogh moved beyond illusion to create work that tested new palettes and ideas about spatial effects,” Aronson says.

“This exhibition,” the curator adds, “is really the first to take a close look at van Gogh’s poetic depictions of sous-bois, the French term for ‘forest floor’ or ‘undergrowth.’ ”

Simon Kelly, head of the department of modern and contemporary art at the St. Louis Art Museum and co-author of the catalog for the Cincinnati exhibition, attributes van Gogh’s intense interest in the nuances of nature to a childhood rooted in the spirituality practiced by his father, the Rev. Theodorus van Gogh, a pastor of the Dutch Reformed Church in Holland.

“When I see van Gogh’s later works, I think of the quote from English poet William Blake: ‘To see a world in a grain of sand and heaven in a wild flower,’ ” Kelly says. “His paintings embrace the pantheistic idea that the divine is within all aspects of nature and can be seen not only in grand plains but also in the smallest object.” 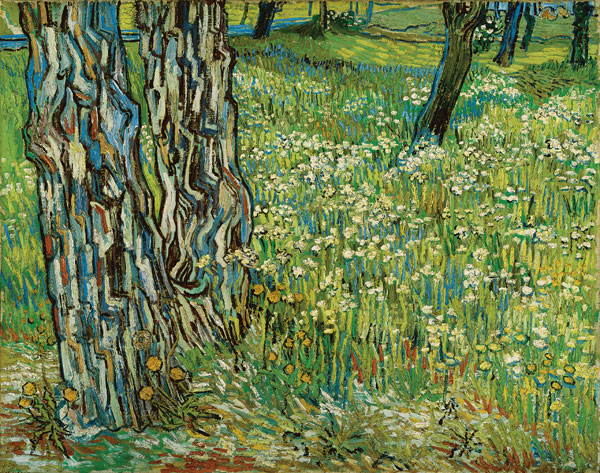 Vincent van Gogh's "Tree Trunks in the Grass" was created in April 1890, just a few months before the self-inflicted gunshot wound that claimed the artist's life. (artwork courtesy of Kroller-Muller Museum)

The optimism van Gogh struggled to muster while grappling with inner demons during the last months of his life is evident in “Tree Trunks in the Grass,” which the artist completed in late April 1890. Included in the exhibition, the oil painting is bathed in rich hues of green and light blue. Using long, vertical strokes for the trunks and short ones for the flowered grass, the artist outlined the garden with horizontal touches of uniform greens.

“Van Gogh’s reverence for nature shows through in his desire to mimic natural textures,” Kelly says, “whether a rough tree bark or blades of grass.”

In 1881, Georges Seurat radiantly captured the peaceful solitude of “The Forest at Pontaubert,” a woodland located in a village southeast of Paris. Best known for his detailed canvases depicting modern life in Paris (one of Seurat’s most famous, “A Sunday on La Grande Jatte,” is replicated in shrubbery at Columbus’ Topiary Park), the artist presents a lush autumn tapestry of yellow and green enhanced by the interplay of light and shadow.

“Seurat is noted for being a pioneer in his use of pointillism, a technique in which small paint dots are applied in near uniform size to heighten coloristic effect,” Kelly says. “His innovations placed him at the center of the avant-garde in the 1880s.” 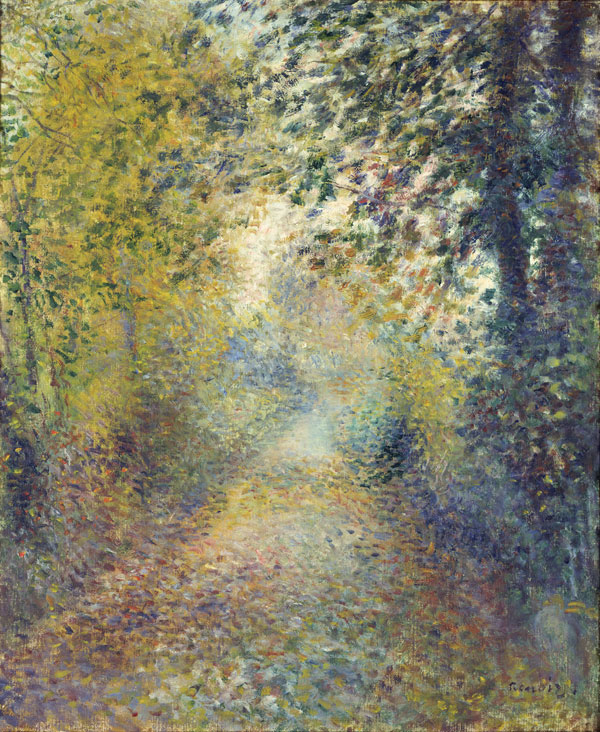 Pierre Auguste-Renoir's "In the Woods" is part of the Cincinnati exhibition. (artwork courtesy of The National Museum of Western Art)

After experimenting with impressionism for a decade, Paul Cézanne opted to record the world around him in a more conceptual way.

His 1885 painting, “Interior of a Forest,” is filled with dissected strokes resembling a variety of dense foliage. Even though touches of sky are not present, the shrubs in the foreground wreathed in light and a background covered in shade create depth.

“Cézanne straddled the worlds of impressionism and postimpressionism,” Kelly says. “This painting is interesting because it has a kind of abstract quality to it, especially in the way he played with light and pattern.”

Although Pierre-Auguste Renoir gained fame as a portrait painter, his 1880 oil painting, “In the Woods,” depicts the outdoors in summer. Instead of relying on green hues that are hallmarks of the season, the artist opted for yellows, blues and pinks.

In an essay included in the exhibition catalog, Laura Prins, an independent scholar at the Van Gogh Museum in Amsterdam, writes that Renoir believed his landscapes were inferior to his figures, yet useful for the painter of figures, citing the artist’s own words: “In the open air you are inspired to use colors that would have been unimaginable in the attenuated lighting of the studio.”

In addition to keeping a eye on what his peers in impressionism and postimpressionism were producing, van Gogh took avid interest in the work of the Barbizon school, a mid-19th-century artists’ colony dedicated to painting landscapes in realistic terms. Located in the village of Barbizon on the outskirts of Paris, the movement attracted a multitude of talent, including Narcisse Virgile Diaz de la Peña, whose work, “Forest of Fontainebleau” is included in the exhibition. In her essay about the painting for the show catalog, Prins notes van Gogh’s outward admiration for the Spanish artist who was born in the port city of Bordeaux in southwestern France.

“One of the many beautiful aspects of these paintings is the fact that you don’t need to know a lot about them to appreciate them,” says Aronson. “Each work encourages you to identify with the artists’ experiences in nature as though you were walking right beside them.”