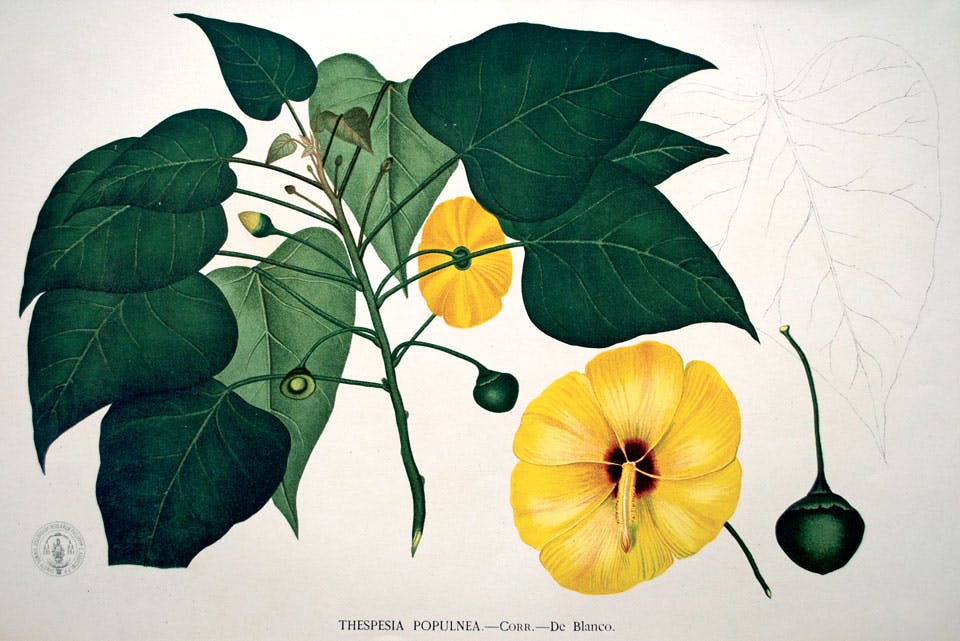 The Zanesville Museum of Art showcases pieces that fueled our love for artwork inspired by the natural world.

The magnificent hand-colored engraving of a tree rhododendron is clearly a masterful work of art. But for Zanesville Museum of Art guest curator Deborah Elliott, there’s more to it than that. Elliott, who is also an art history instructor at Ohio University’s Zanesville campus, sees the 179-year-old image as a passport to the exotic.

“The plant is from far off Nepal,” she explains, while admiring the print’s velvety sheen that makes each leaf seem three-dimensional. “We may not be able to visit the country, but we can enjoy its beauty right here. Because of the combination of red and green — two brilliant primary colors — the image commands the viewer to come over to it.”

The 1836 rendering by English artist Frederick W. Smith is one of 32 botanical prints on view through Aug. 1 at the Zanesville Museum of Art exhibition “Scientific Wonders: Botanical Prints from the Lloyd Library and Museum.”

Most of the images featured are on loan from the Cincinnati museum established in 1898 by Queen City pharmacist Curtis Gates Lloyd. The institution is known worldwide for its medicinal botany book collection — the largest in the Western Hemisphere. More than 250,000 volumes printed between 1493 and present day line the shelves.

Some of history’s earliest-known illustrations of plants are thought to be rudimentary depictions unearthed during excavations in Mesopotamia, Crete and Egypt. But it was in the 17th and 18th centuries, during the Age of Enlightenment, that botanical art began to bloom, according to Lloyd Library and Museum exhibits curator Anna Heran.

“It was a time of critical thinking and intellectual discovery,” she says. “Scientists started seriously taking into account the natural world and all its wonders. Botanists began crisscrossing the globe in search of new specimens to bring back to their respective countries and hired illustrators to give permanence to their discoveries.”

Ironically, Heran adds, even though very few female artists achieved the recognition they deserved, the popularity of botanical art was driven mostly by the enthusiasm of women.

“I don’t mean this to sound sexist, but women do seem to pay a little bit greater attention to detail and have finer motor skills,” she says. “That’s just the way we’re built. Many women seemed to find their own during this time.”

Thanks to the evolution of the microscope, artists of the period enjoyed a surge of creativity: They could finally capture a plant’s entire growth cycle, including the minutiae that could not be detected with the naked eye.

“Sadly, many of these talented people became just an arm of the scientists,” Heran says. “That’s why so little is known about them. Only their work is what’s left behind.”

Technological advances in printing achieved during the late 1700s served as the catalyst that led to botanical illustration thriving as an art form.

“The simple woodcuts that were difficult to duplicate gave way to copper-plate engravings and lithographs that could be reproduced,” she says. “The thought was that if precise drawings and depictions could not be provided, then accurate information could not be conveyed. Prior to this time, a lot was left to the imagination about what the plants described in books actually looked like.”

Painter and engraver Genevieve de Nangis Regnault’s talents are a focal point of the Zanesville Museum of Art exhibition. Avid world travelers, Regnault and her husband, botanist and physician Nicolas Francois Regnault, collaborated on a four-volume set of 472 plates published between 1769 and 1774. Their work, explains Heran, is considered one of the most impressive botanical collections of the period.

“Back then, many of the books simply provided the name of the plant and a description,” she says. “But because Nicolas was a doctor, he understood the medicinal and nutritional values of the plants they studied, so the couple made sure to include that information in each book.”

Johann Kniphof took a more eclectic approach. The 18th-century botanist — credited with being the first to adopt the two-part binary nomenclature system developed to assign names to plants — employed the use of nature printing. During the process, a plant is laid out flat, blackened with printer’s ink and placed between two pieces of paper. Gentle pressure is then applied to leave an impression of the plant’s veins and fibers, which are then colored by hand. Portions of Kniphof’s book, Botanica in Originali, published in the 1750s, is showcased in the exhibition.

“What’s interesting about his work is that each individual volume is ever-so-slightly different because each specimen could only be pressed six or seven times before it had to be replaced,” Heran says. “As you can imagine, plants that have firm stems or heavy, dense leaves and nice venation transferred pretty well. But it wasn’t that easy to ink the big, squishy flowers that had a tendency to turn into goo. The result was some fairly abstract-looking plants that are really quite interesting in their own right.”

As the 19th century dawned, botanical prints became highly coveted for their home decor appeal. Although watercolorist Jean Louis Prevost was known for his scientific reproductions of flowers native to France, he also created still lifes that were intended as reference work for china and fabric designers.

“The middle class and upper class preferred portraiture for decoration,” Heran says. “But as Europeans and Americans began growing their own enormous backyard gardens ... they started patronizing botanical artists to paint their favorite flowers to hang on the wall. Although [they] were considered to be still scientifically accurate ... they were valued more for perfection and beauty.”

The allure of such images, professor Elliott points out, remains to this day.

“The art has a fashion to it that has seeped into every single facet of our lives, ” she says. “Copies of these prints remain best-sellers, and the images have also been reproduced on everything from pillows to curtains. They remain irresistible.”