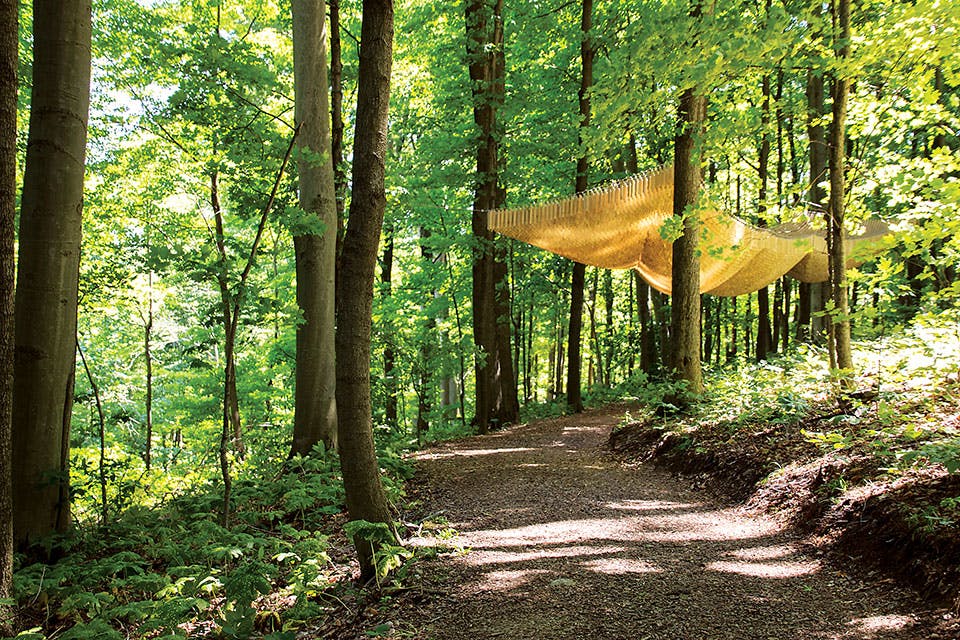 Jason Nies presents outdoor artwork among nature on the grounds of the Inn at Honey Run in Millersburg.

From a distance the sculpture looks like yellow waves. Upon closer inspection, ones sees that the work is made using more than 12,000 paint sticks, each painstakingly zip-tied to a net suspended from the trees and gently waving in the breeze like wind chimes.

The piece, “Archer’s Roost” by Cleveland-based artist Lauren Skunta, is one of the large-scale artworks that line the 1.5-mile path through the Holmes County Open Air Art Museum, located on the grounds of the Inn at Honey Run in Millersburg.

“‘Archers Roost’ is fascinating because I just thought it was cool with the sticks hanging above you, but I never anticipated the way that piece comes alive with the wind,” says Jason Nies, the inn’s owner. “When you walk underneath it, the sticks will flow and it’s just poetry in motion.”

Nies was inspired to create his open-air museum after visiting a similar attraction in Latvia. He bought the Inn at Honey Run in 2009 after his trip to Europe, and while he always knew he wanted to spread art throughout the property’s 56 acres, it wasn’t until 2015 that the first piece was built — a 10-foot-tall Native American-inspired totem pole, “The Face of the Nations” by Holmes County metalworker artists Jan and Vince Bowden.

Today, the museum has eight pieces with another three to be built over the next year. Nies’ goal is to ultimately have around 70 works installed on-site. He selects regional artists by referral and then each artist pitches him their idea. The result is a series of works that span styles and mediums, from a piece crafted using sticks found on the inn’s grounds (Walter Herrmann’s “Woven”) to a series of haikus about Ohio’s four seasons appearing on steel plates attached to 30 rocks (Julie Warther’s “Haiku Walk”). The only uniting factor between the pieces is the way nature inspires and enhances the experience of seeing them. The pieces take on different appearances and movements depending on the weather, light or season.

“Nature itself is art,” Nies says. “It’s ever-changing, and to incorporate art with that just adds a whole new element. You’re seeing the creation within creation.”