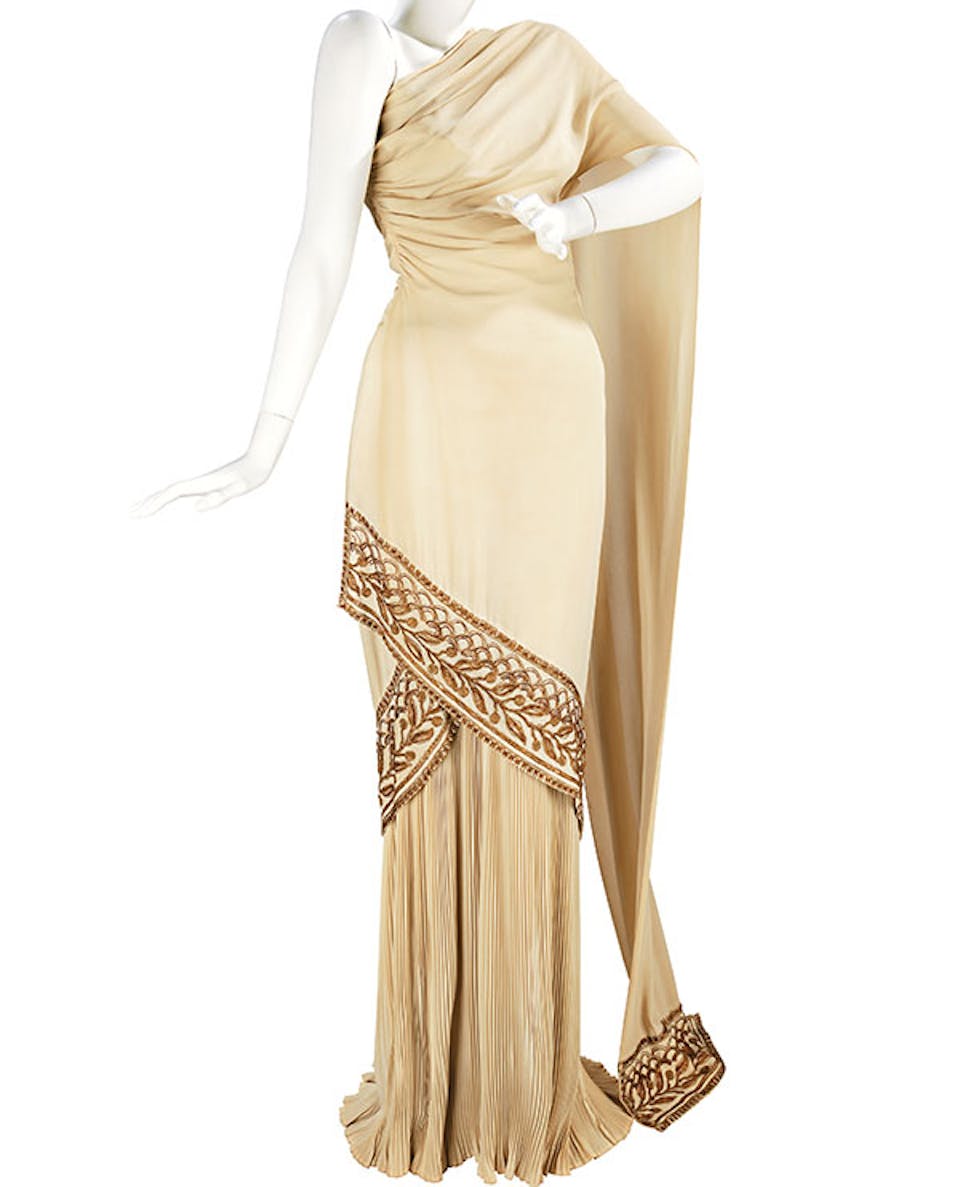 Cincinnati exhibition highlights couture that still turns heads decades after it was designed.

As Cynthia Amnéus, chief curator of the Cincinnati Art Museum, reviews the racks of fashions that will be featured in the upcoming exhibition, “High Style: Twentieth-Century Masterworks from the Brooklyn Museum Costume Collection,” she pauses before a necklace that’s guaranteed to make your skin crawl.

Made from Rhodoid, a clear cellulose acetate plastic, it swarms with beetles, dragonflies, bees and ladybugs made of brightly colored tin.

“Elsa Schiaparelli was one of a kind,” Amnéus says with a grin, describing the attributes of the Italian-born French couturiere whose concepts were influenced by the avant-garde work of surrealist artists Salvador Dali and Jean Cocteau. “She wasn’t afraid to experiment. … This piece will turn heads today as it did when Schiaparelli debuted it in 1938.” 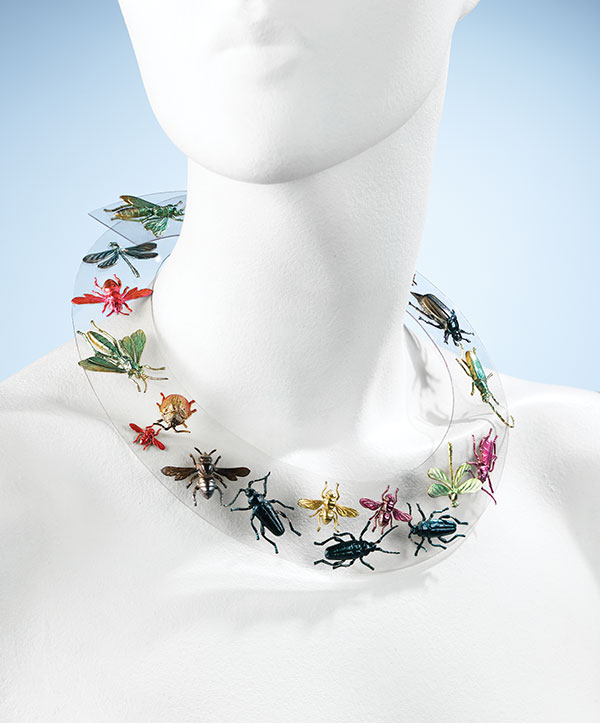 Elsa Schiaparelli designed this necklace in 1938, influenced by the work of surrealist artists Salvador Dali and Jean Cocteau.


The accessory is one of 100 stunning examples of exquisite couture showcased at the museum Nov. 7 through Jan. 24. The exhibition — on loan from New York’s Metropolitan Museum of Art — focuses on the years 1900 to 1980. It was a time, Amnéus explains, filled with innovation and individuality in women’s clothing.

“Fashion designers are artists,” she says. “They began to seriously engage in the same considerations a painter does: Do the colors complement each other? Does the composition work? How do I want to push the edge? How can I try something new?”

As the 20th century dawned, crinolines, bustles and abundant frills of years past gave way to simplicity and common sense. Paris’ House of Worth, which had built its 80-year-old reputation on fashioning dramatic garments with spectacular textiles, was committed to keeping that tradition fresh. Designer Roger Worth, grandson of the founder, continued his family’s legacy by creating garments with clean lines to showcase expensive fabrics. Jan Glier Reeder, consulting curator for the Brooklyn Museum Costume Collection and author of the exhibition’s catalog, explains that Worth cut and fitted the bodice of his 1938 silk taffeta evening dress featured in the show so that it would perfectly reconfigure the garment’s bold design.

“It looks as if someone took a paintbrush and spontaneously made the zigzag pattern,” Reeder says. “And look at the drips. It reminds me of works by Jackson Pollock and other painters who emphasized their process by letting it be evident in the work.”

The early 1950s ushered in an era of glamour and sophistication that remain unparalleled. Women who sported overalls and slacks while their men were at the front during World War II were ready to be feminine again, and Charles James answered the call. The American designer was known for applying mathematical, architectural and sculptural concepts to his opulent evening gowns, as evidenced in the 1953 satin and lace Clover Leaf dress he considered his masterpiece.

Constructed from 30 pattern pieces and weighing 10 pounds, the garment was crafted so that the hem would not drag along the floor.

“The weight of the dress is balanced on the hips, so it does not feel heavy when you are wearing it,” Amnéus says.

Two years later, James would be heralded for the touch of romance he infused in his Tree ball gown, fashioned in hand-pleated rose silk taffeta with a structured bouffant flounce.

“As an added luxury, the red flounce is lined with shiny white satin,” Reeder says.

The designer named the dress after Marietta Peabody Fitzgerald Tree — mother of ’60s supermodel Penelope Tree — for whom it was created, as well as for the uprooted plant form the silhouette resembles.

“James’ creativity and innovative way of approaching dressmaking resulted in iconic styles and shapes that influenced the rest of the 20th century and beyond,” Reeder says. “He invented the trouser skirt — which we call culottes — and the wrap dress. James created a fabulous satin dinner jacket in 1938 that he stuffed with eiderdown. It’s the ancestor of the puffer coat we wear today.”

“High Style” also pays homage to the female designers who came to the fore during the 20th century. Among them were Zoe, Micol and Giovanna Fontana, who excelled at producing elegant eveningwear for high-profile women, especially film stars. Dramatic and opulent surface decoration befitting Hollywood royalty was their trademark, as evidenced in the 1954 evening ensemble Micol created to adorn Ava Gardner in “The Barefoot Contessa.” Made of pink duchesse silk satin embroidered with pearlescent and iridescent sequins, beads and black-velvet applique, the ensemble was a scene-stealer. In the film, Gardner plays a woman of humble origins who rises to become a countess.

“The strapless dress, which is a fairly traditional gown from the ’50s, shows off Ava Gardner’s gorgeous figure,” Reeder says. “But the bolero jacket with its swinging sleeves transforms the dress into a Renaissance look that adds drama and presence even when the actress is not in the room.”

Designers responded to the freewheeling spirit of the 1960s by taking a much more liberal and minimalist approach to clothing. Reeder cites Hubert de Givenchy’s 1960 evening dress as an example: Robin’s-egg-blue silk taffeta has been transformed into a loosely fitting strapless robe meant to make an unrestrictive fashion statement.

“Freedom of dress and freedom of movement were the hallmarks of the decade,” Reeder says.

It would serve as the defining prelude of what was to come.

“The ’60s led to fashion becoming more democratic,” Amnéus says. “We’re no longer bound in terms of what our options are.

“Visitors to the exhibition will see the push and pull, the recycling of ideas, and some innovative concepts as well,” she adds. “They will be absolutely wowed.”