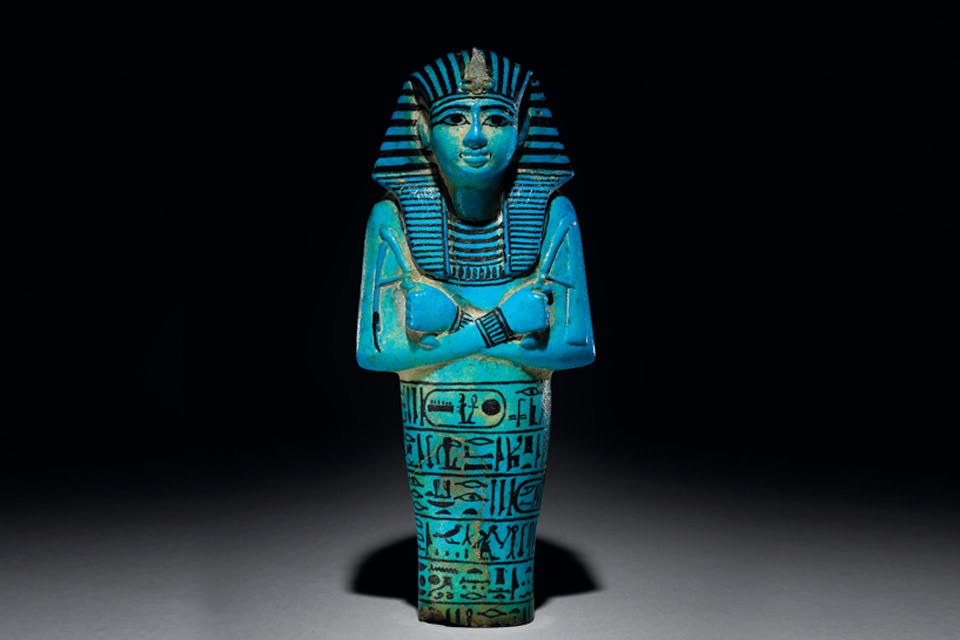 The Cleveland Museum of Art’s “Pharaoh: King of Ancient Egypt” showcases objects from the British Museum.

Aude Semat met Egyptian pharaoh Amenhotep III at the Grand Palais in Paris 23 years ago. Then a teen, Semat was entranced by the figure at the center of “Egypt’s Dazzling Sun: Amenhotep III and his World,” a traveling exhibition curated by the Cleveland Museum of Art.

“As a child, I was captivated by ancient civilizations and learning about the way people lived,” Semat recalls. “Finally having the opportunity to see artifacts up close for the first time in person is unforgettable.”

Since then, Semat’s passion for ancient Egypt and its people has come full circle. A lecturer in Egyptology at the Ecole du Louvre in Paris, she is guest curating “Pharaoh: King of Ancient Egypt,” on exhibit at the Cleveland Museum of Art through June 12.

“Clearly, the stars are aligned,” Semat says with a laugh. “When I visited the Grand Palais with my mother, we had a choice of seeing the Egyptian exhibit or one about Titian, a painter during the Italian Renaissance. My mother chose the shorter of the two lines, which led to Amenhotep III.”

Organized in collaboration with the British Museum, “Pharaoh: King of Ancient Egypt” features more than 150 objects, ranging from sculpture to jewelry, that span 3,000 years of Egyptian history.

“There are glimpses of life in the exhibition,” Semat says, “that have not been preserved in other civilizations.”

The exhibit showcases treasures from the British Museum’s extensive collection of 100,000 objects — the largest outside of Egypt. Most were accrued from the late 18th through the early 20th century and included the time period in which Egypt allowed removal of antiquities through partage, the custom of sharing excavated artifacts.

The system encouraged foreigners to provide the expertise and funding needed to lead excavations. In return, explorers were permitted to take a portion of the unearthed bounty back to their own countries. British physician Sir Hans Sloane launched the collection by bequeathing his assortment of Egyptian artifacts to the museum upon his death in 1753.

British consuls stationed in Egypt throughout the years that followed procured additional objects. One of them was English artist, traveler and collector Henry Salt, who commissioned Italian explorer Giovanni Battista Belzoni to transport a 16-ton bust of King Ramses II across Egypt.

After tying the stone to wooden rollers, Belzoni and his team of hundreds of workers pulled it by ropes to the banks of the Nile River. From there, it was floated downstream and taken to England by ship. British Museum trustees purchased the sculpture from Salt six years later in 1822.

“The British Museum’s reputation for Egyptian art is renowned,” says Marie Vandenbeusch, project curator for the museum’s Department of Ancient Egypt and Sudan. “We are very lucky that the extraordinary foresight of Hans Sloane more than 250 years ago and the travelers who followed led to this rich collection. And we’re thrilled to be able to share it.”

Semat estimates that “many hundreds of pharaohs” ruled Egypt from approximately 3000 B.C. until the Roman conquest in 30 B.C. They owned the land, made the laws, collected the taxes and defended their country against foreign invasion.

Although their individual reigns reflected distinct political, technological, artistic and economic realities of the times, each ruler was charged with a monumental task that never wavered: keeping the gods happy so that Egypt prospered forever.

“The story of these ancient kings is a complex one,” Semat says. “Although they had many advisers, pharaohs were, first and foremost, the official face that was linked to the politico-religious nature of Egyptian kingship. They were seen as larger than life.”

The Cleveland Museum of Art’s “Pharaoh: King of Ancient Egypt” is filled with pieces that showcase that fact. The exhibition is divided into 10 themed sections with titles ranging from “Born of the Gods” and “Running Egypt: Officials and Government” to “Foreigners on the Throne” and “War and Diplomacy.” Each portion is filled with objects, from those used in religious festivals to artifacts placed in tombs to ensure a smooth transition to the afterlife.

Every pharaoh was required to construct temples in which to worship the gods, and limestone blocks from several are prominently displayed in the Cleveland exhibition, including a relief dated 305 to 285 B.C. that depicts Pharaoh Ptolemy I offering grass and papyrus to Hathor, the goddess of joy and fertility.

But there are also touches throughout the exhibition that transcend time, including the lapis lazuli ornament of a winged scarab that has a contemporary vibe and a paint box holding wells of black, green, red and blue hues.

“The royal office was divine,” Semat says, “but it was held by a human being.”

Upon entering “Pharaoh: King of Ancient Egypt,” visitors come face to face with the 5-foot-tall quartzite sandstone likeness of Pharaoh Seti II, who ruled between 1200 and 1194 B.C. He presides over the assemblage while making an offering to the powerful creator god Amun.

“All the symbols are present that identify him as a pharaoh, including the detail of his name in the oval cartouche at the base of the statue,” Semat explains.

The protective uraeus — or sacred serpent — on Seti’s brow is an emblem of supreme power, and the bull’s head visible between his legs conveys strength. The papyrus plant and lotus decorating each side of his throne symbolize unification in the country.

One of the most popular deities in Egyptian art was Ra, who represents the midday sun. The granite statue of the falcon god Ra-Horakhty featured in the exhibition represents the union between Ra and Horus, a symbol of royalty.

“Most of the Egyptian gods were associated with animals, and this statue dates to the reign of Ramses II …” Semat says. “It depicts the falcon god protecting the oval cartouche of Ramses II.”

The curator cites a rare silver figurine of the god Amun-Ra as one of her favorites in the exhibition. Dating from 1069 to 715 B.C., the powerful creator deity is garbed in a gilded headdress, which represents an association with the sun. His beard — an attribute of the gods often borrowed by the pharaoh — corroborates his divine status.

“We know such statues existed, but we have so few of them,” Semat says. “Figurines made of metal were often melted down to reuse. In Egypt, silver was more precious than gold, since it was imported from Western Asia and the Mediterranean.”

Each pharaoh’s work to ensure the prosperity of Egypt was never finished, and that included during the afterlife. Shabtis, such as the blue faience figurine of Pharaoh Seti I included in the Cleveland exhibition, were placed inside tombs to undertake agricultural work on behalf of the deceased. Many were depicted bearing tools such as a hoe and basket of grain. Although the feet of Pharaoh Seti’s shabti are missing, the text on its legs has been identified as a passage from the Book of the Dead, a funerary text commonly reproduced on the figurine.

“When people think about Egypt, the first thing they think about is how beautiful and monumental everything was, and that’s the first layer of the exhibition,” says the British Museum’s Vandenbeusch. “But the other layer is to see that everything has meaning. Even the most beautiful or minuscule object has a specific purpose — in life or in death.”