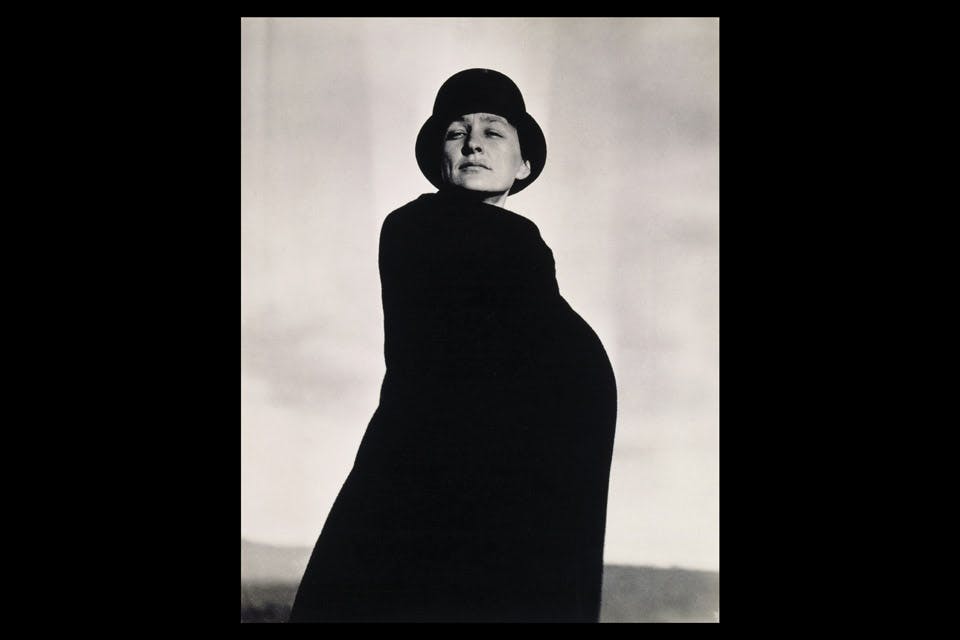 A new Cleveland Museum of Art exhibition delves into the connections between the paintings, personal style and public persona of iconic artist Georgia O’Keeffe.

It’s no wonder Mark Cole, curator of American painting and sculpture at the Cleveland Museum of Art, gets a bit nostalgic when discussing “Georgia O’Keeffe: Living Modern,” a retrospective of the eminent artist’s work.

While a student at Case Western Reserve University earning his master’s degree in art history and museum studies, Cole frequented the museum and always made a beeline for “Morning Glory with Black.” The oil painting, which O’Keeffe completed in 1926, was acquired by the Cleveland Museum of Art in 1958.

“This is one of the great, great, great flower paintings that gets reproduced a lot,” Cole says. “It’s an amazing composition in the fact that it is a beautiful close-up of a morning glory, but it’s also an outstanding essay in abstract design. The way it’s magnified and essentially cropped by the canvas makes it a really striking piece.”

“Morning Glory with Black” is one of 140 objects showcased in the Cleveland Museum of Art exhibition, which runs Nov. 23 through March 3. Organized by New York’s Brooklyn Museum, “Georgia O’Keeffe: Living Modern” not only includes paintings, but also fashion and sculpture — mediums Cole says are not usually associated with the artist.

“When I saw the show at the Brooklyn Museum a year or so ago, I was really entranced by this new look at an artist I thought I knew everything about,” he explains. “I didn’t think there was much more to learn, but then this show just completely threw the doors open into all these different new areas of understanding her.” 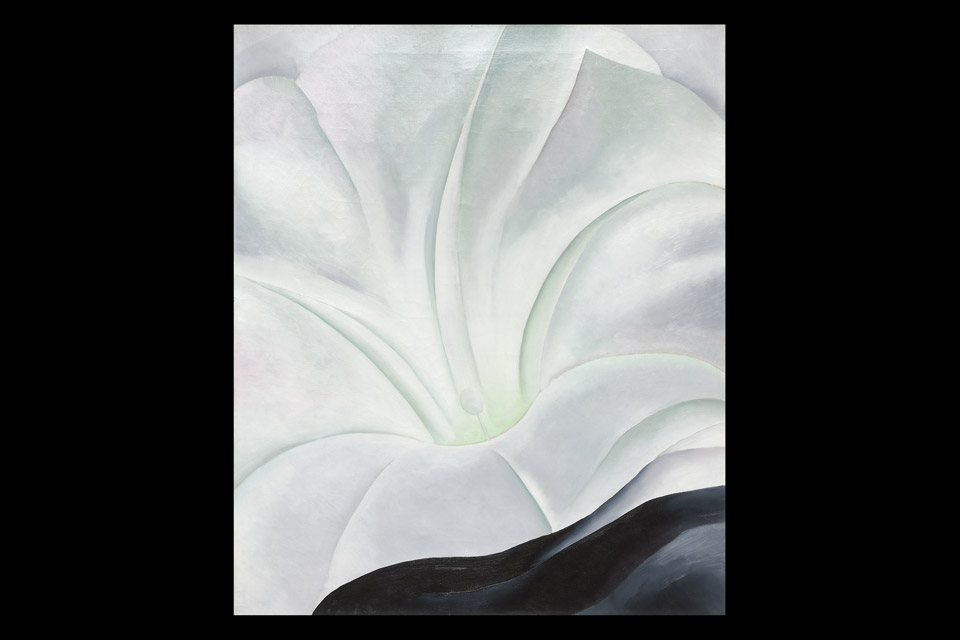 Georgia O’Keeffe’s 1926 painting “Morning Glory with Black” is among the 140 objects featured in the exhibition. (“Georgia O’Keeffe: Living Modern” is organized by the Brooklyn Museum and curated by Wanda M. Corn, Robert and Ruth Halperin Professor Emerita in Art History, Stanford University)

One of the best-known artists of the 20th century, O’Keeffe is lauded worldwide for her boldly innovative, now iconic paintings, ranging from larger-than-life flowers and dramatic cityscapes to sparse desert scenes filled with sun-bleached bones set against barren skies. She’s also heralded as being a leader in the development of American modernism, a trend of philosophical thought during the early 20th century that sought to present new ways of visually interpreting the world.

“O’Keeffe’s discovery that paintings could be about the beauty of color and line, rather than a depiction of nature, was a decisive moment,” says the exhibition’s guest curator Wanda Corn, professor emerita of art history at Stanford University and author of Georgia O’Keeffe: Living Modern, the book that accompanies the show.

“She pioneered in the making of a visual language that ushered in the 20th century.”

Born in 1887 in Wisconsin, O’Keeffe enrolled in traditional realist courses at the Art Institute of Chicago and the Art Students League in New York. But her focus shifted dramatically when she was introduced to the teachings of Arthur Wesley Dow. An American painter, photographer and educator, Dow believed the subject of artists’ work should be centered on personal ideas and feelings and visualized through harmonious arrangements of lines and colors.

“As most modernists were in the early 20th century, O’Keeffe was a rebel,” Corn says. “She took the language of modern abstraction into new places. My book is called Living Modern, which was a very self-conscious choice of words. I was [presenting] her as a painter, but I also wanted to explain that her art extended into the way she lived, decorated her homes and dressed. She even rethought where artists could live ... that they don’t have to live in an urban environment, that the desert was just as American a subject as a skyscraper.” 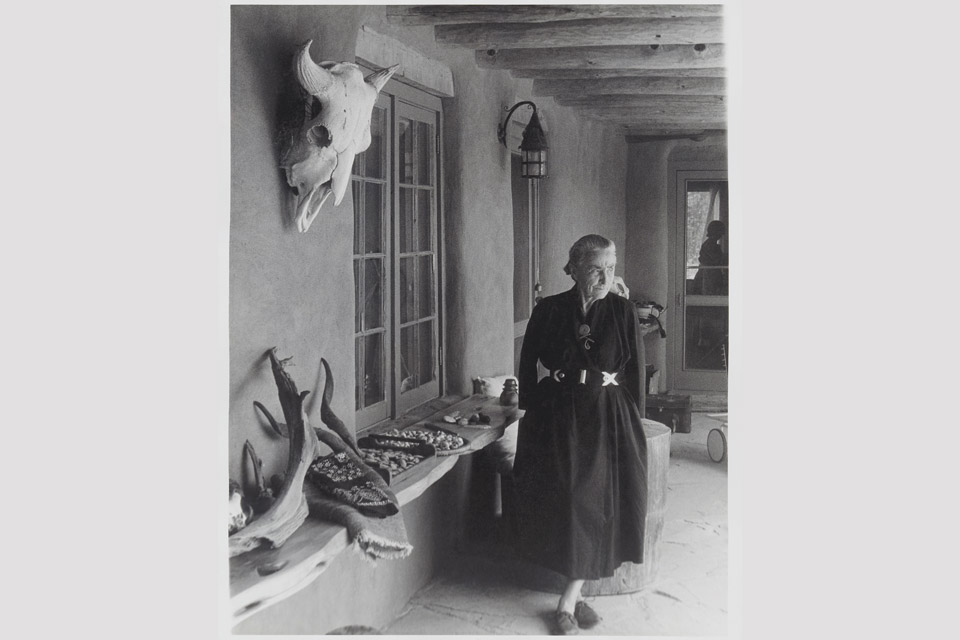 It was during a visit to New Mexico in 1929 that the color palette of the American southwest entranced O’Keeffe. For many years afterward, the artist would divide most of her time between living in Manhattan with her husband, photographer Alfred Stieglitz, and residing near Abiquiu, New Mexico, at Ghost Ranch, a former dude ranch that became her summer retreat and studio.

“The Mountain, New Mexico,” which O’Keeffe completed in 1931, is a superb example of the artist’s bold use of reds, pinks and yellows to depict the stony cliffs visible from her workroom. “I love her red paintings,” Corn says. “She usually used the color sparingly, but here it explodes and is beautifully modulated. … O’Keeffe said that New Mexico is painter’s country and that it is all there for you — meaning she didn’t have to invent the color or intensify it because it was already in the landscape.”

Although O’Keeffe made a name for herself as an artist, she could have just as successfully launched a career as a fashion designer or seamstress.

Unlike her colorful paintings, the artist’s wardrobe was predominantly black and white,  and she favored an androgynous look. The clean and flowing lines that are hallmarks of her canvases are also evident in her couture.

“There’s a unifying aesthetic that is evident not only in her art, but also in her clothing,” the Cleveland Museum of Art’s Cole says. “It’s one of distillation, clarity and streamlining. For example, her stitches mirror the crisp edges in the folds of the leaves and flowers she was painting.”

Several of the handmade blouses included in the show spotlight O’Keeffe’s talent for crafting rows of barely perceptible pintucks that ensure fit and double as a fashion element. A favorite garment features a pattern that bears a strong resemblance to “2 Yellow Leaves (Yellow Leaves),” an oil painting she finished in 1928. 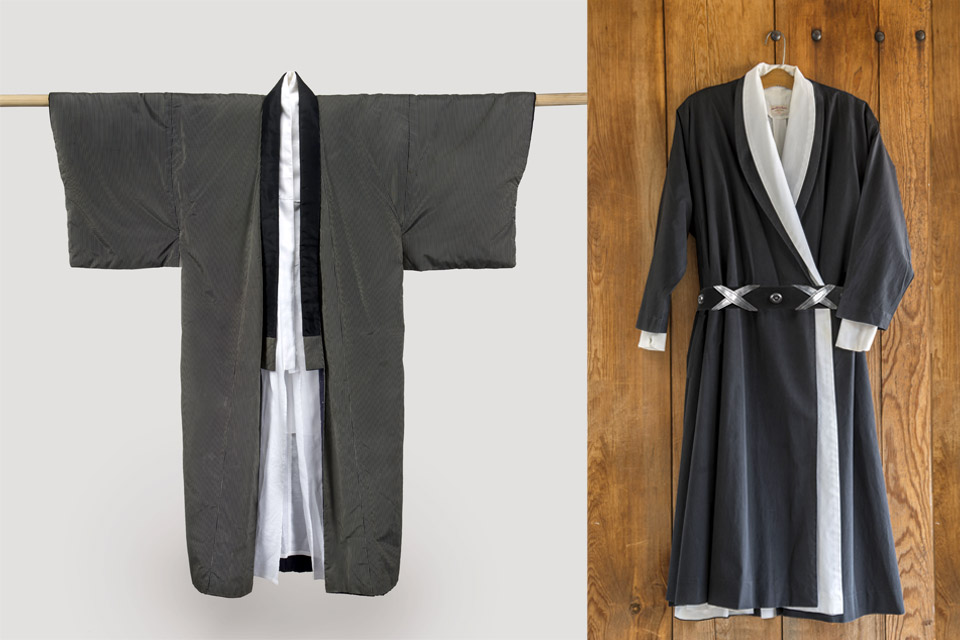 “Padded Kimono (Tanzen)” (left) and “Wrap Dress” are among the clothing featured in the exhibition. (“Georgia O’Keeffe: Living Modern” is organized by the Brooklyn Museum and curated by Wanda M. Corn, Robert and Ruth Halperin Professor Emerita in Art History, Stanford University)

Through each phase of her career, O’Keeffe strove to control how her image was presented to the press and the public. Her husband was instrumental in helping her cultivate the look that would become undeniably hers.

For the cover of her book, Corn chose a photograph of O’Keeffe that Stieglitz created between 1920 and 1922. In it, the artist wears a black bowler hat and is swathed in a tightly wrapped cape.

“She loved and embraced the camera, and, tutored by Stieglitz, became a very good model,” Corn explains. “He used black and white film and popularized her black-and-white look, beautiful neckline and strong silhouettes.”

Following Stieglitz’s death in 1946, other photographers captured O’Keeffe’s appeal. For Todd Webb’s “Georgia O’Keeffe on Ghost Ranch Portal, New Mexico,” taken in the 1960s, the artist posed in a black wrap dress (in summer, it would be a white or light-colored one) that was a go-to garment. In 1984, Bruce Weber photographed the 97-year-old in her natural surroundings. For the resulting “Georgia O’Keeffe, Abiquiu, N.M.,” she wore a gray silk kimono over a white robe accentuating her long neck. A silver pin designed by sculptor Alexander Calder and a well-worn black felt hat complete the ensemble. O’Keeffe died two years later in Santa Fe.