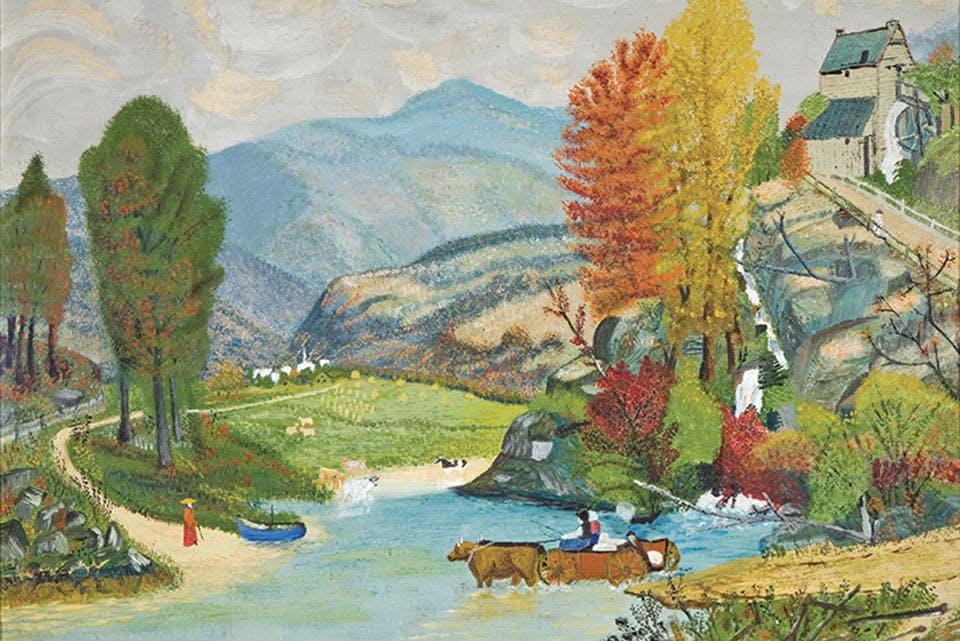 A Dayton exhibition highlights the woman who went from farm wife to celebrated artist at age 79.

The paintings sat in the window of Thomas’ Drugstore in Hoosick Falls, New York, for more than a year before anyone took notice. Created by a local woman known to her friends and acquaintances as Grandma Moses, the works depicted sweeping and simple scenes of rural living. But, for the most part, they merely collected dust.

Then, in 1938, New York City art collector Louis Caldor saw them while passing through town. He bought all of the paintings before driving to Moses’ home to purchase a dozen more. He then returned to Manhattan, where he hoped to spark enough interest for an exhibition.

“As our country was becoming more industrialized, Moses was painting these idyllic images of a rural America that was fast disappearing but everybody wanted to hold onto,” says Jamie Franklin, curator of the Bennington Museum in Bennington, Vermont, home to the largest collection of Grandma Moses art in the United States.

A year after Caldor’s discovery, the Museum of Modern Art included three of Moses’ works in a show about contemporary unknown painters. But the paintings were just part of her body of work, which also included scenes she crafted from worsted wool and other textiles.

Over the next two decades, the traveling exhibitions that followed introduced Moses’ work to new audiences, transforming her from anonymous farm wife to celebrated folk artist.

Through Feb. 21, the Dayton Art Institute is presenting “American Sampler: Grandma Moses and the Handicraft Tradition.” The exhibition features 45 paintings and worsted wool embroideries created by Moses, as well as examples of 17th-century crewelwork and Jacobean embroidery considered forebears to Moses’ signature style.

“During the 1930s and ’40s, there was widespread interest in what is known as primitive, self-taught or folk art,” Franklin explains. “It was done by people who did not have any formal artistic training but were creating objects, such as paintings and needlework, that became highly prized collectibles. ... Grandma Moses belongs to this genre. When people saw her work and heard about her, they couldn’t help but be enthralled.”

That reaction still holds up today. As Dayton Art Institute chief curator Aimee Marcereau DeGalan discusses “Get Along,” Moses’ 1957 painting of a sleigh traveling across a snowy countryside, the awe in her voice is obvious.

“Magical,” she says in a whisper, before recalling her childhood days growing up in Michigan and visiting her grandparents on Christmas Day. 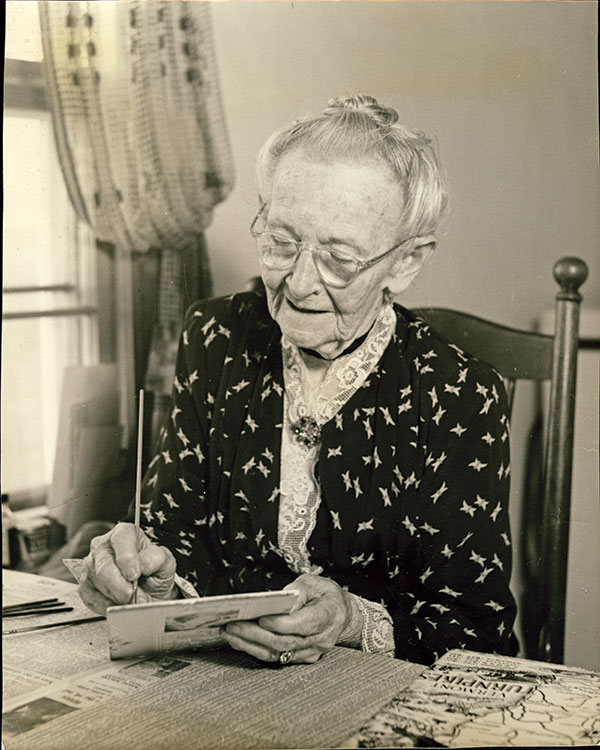 “They lived in a really hilly section of the state that was an hour or so away from where we lived,” she says. “And it was always snowy. Even though we were in a car, when I look at this painting … it transports me back to yesteryear.”

Moses’ rise to prominence in the art world at age 79 is nearly as extraordinary as her backstory. She lived a hard life of farm work. The third of 10 siblings, the future artist was born in 1860 on a flax farm in Greenwich, New York. She left home at age 12 to work as a hired girl on a neighboring farm, where she met her future husband, Thomas Salmon Moses. The couple married in 1887 and had 10 children, five of whom died in infancy. In 1905, the Moses family purchased a farm in upstate New York, which they tended until Thomas’ death in 1927.

“In addition to making butter and potato chips to supplement the family’s income, Moses had a long tradition of handicraft,” Franklin says. “She made dolls from scraps of cloth and embroidered. This is the kind of artistry she brought to her work, which ultimately informed her paintings.”

In 1932, Moses went to Bennington, Vermont, to care for her daughter Anna, who was ill with tuberculosis. It was Anna who showed her mother a picture created with yarn and challenged her to duplicate it. The budding artist relished creating what she called “worsted pictures” and gave them away to friends. When arthritis made it too difficult for Moses to hold a needle, her sister Celestia suggested she paint instead.

Soon, the grandmother of nine had more canvases than she knew what to do with. Moses entered them in county fairs, along with her canned fruits and jams. “I won a prize for my fruit and jam … [not for] pictures,” she quipped to a reporter years after becoming famous.

Caldor’s recognition of Moses’ artistry changed all of that. Her paintings were reproduced on Christmas cards, wallpaper and fabrics. In 1949, President Harry Truman presented her with the Women’s National Press Club Award for Outstanding Accomplishment in Art. Three years later, Harper & Row published her autobiography.

“Success did not spoil Grandma Moses,” says William C. Ketchum, author of Grandma Moses: An American Original. “She remained a very humble woman, continuing to dress like someone out of the Victorian era in a simple buttoned-up black dress, her hair always in a bun. Moses was focused on her past life, which gives us the feeling that she really was a genuine article.”

In her more than 1,500 paintings, the artist never strayed from capturing the land she knew and loved. Autumn foliage amid the rolling hills of the Berkshires and covered bridges were themes she never tired of. Moses also experimented with adding unexpected special effects. In “The Rainbow” — the last work she completed before her death — a pink, yellow and white double arc provides a backdrop to late-summer laborers scurrying to finish scything fields.

“Grandma Moses was a very positive person,” Ketchum says. “The images we get from her are those of joyful days of harvest, skating in winter. Although she suffered tragedy and lived through the Great Depression, you never get a glimpse of that in her work.”

The author cites Moses’ 1959 oil, “Checkered House,” as an example of her upbeat approach to life and art. The artist depicted the distinctive Cambridge Turnpike landmark, which served as a field hospital during the Revolutionary War, as a gathering place for friends.

Anna Mary Robertson Moses died on Dec. 13, 1961, at age 101. In an obituary in The New York Times, President John F. Kennedy lauded her for restoring “a primitive freshness to our perception of the American scene. Both her work and her life helped our nation renew its pioneer heritage and recall its roots in the countryside and the frontier.”

Ketchum echoes that sentiment, when discussing the appeal of her work.

“These days, everyone lives under economic, social and political pressure,” he says. “Grandma Moses’ paintings give us time to relax back into a time which really did exist.”