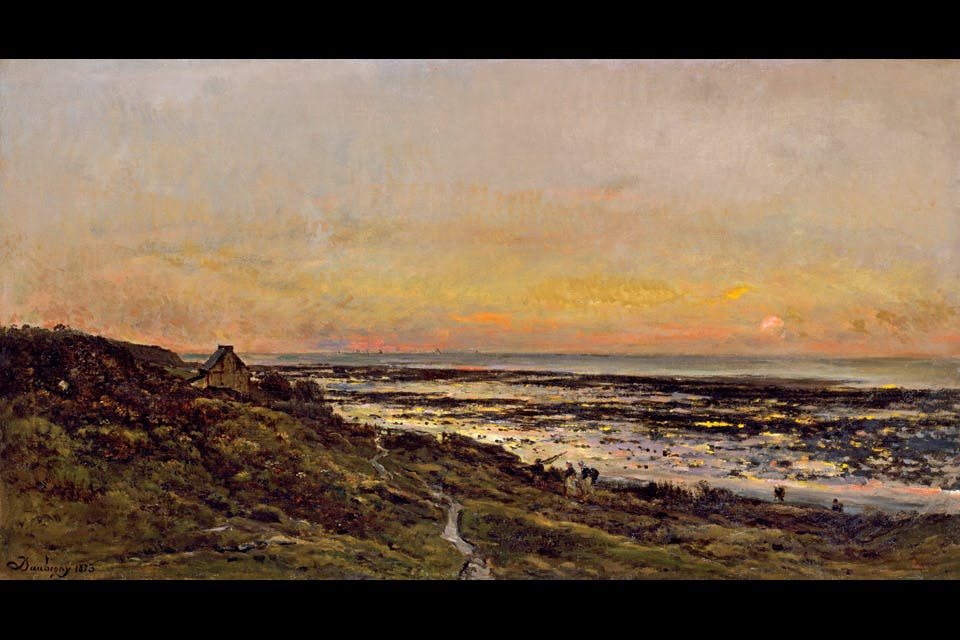 Prior to the rise of Monet and Renoir, painter Charles-François Daubigny made use of vibrant colors and new vantage points. Cincinnati’s Taft Museum of Art premieres an exhibition of his works this month.

Nearly 30 years have passed since Lynne Ambrosini became smitten with the works of Charles-François Daubigny. And while her appreciation for the 19th-century French painter has only grown over time, she also realizes that his name still carries an air of anonymity for most people.
“He was one of the most important painters of his day,” says Ambrosini, director of collections and exhibitions and curator of European art at Cincinnati’s Taft Museum of Art. “Daubigny helped redefine French landscape painting and led it toward a naturalism that would ultimately influence the artists we love today.”

Daubigny’s paintings fetched high prices at the dawn of the 20th century. But that changed as the works of the impressionist painters he inspired became more popular during the following two decades.

“Suddenly, every American museum was looking to buy a Renoir, a Monet, a Sisley — brighter paintings filled with a different set of colors that included purples and pinks and chrome yellows that seemed more contemporary,” Ambrosini says. “These became the must-haves people wanted to invest in.”

Ultimately, Daubigny’s work fell into relative obscurity, but Ambrosini is doing her part to change that with a new exhibition that shines a light on the artist’s influence.

“Daubigny, Monet, Van Gogh: Impressions of Landscape” premieres at the Taft Museum of Art on Feb. 20 and will run through May 29. Spearheaded by Ambrosini and co-organized by the Taft, the Scottish National Gallery in Edinburgh and the Van Gogh Museum in Amsterdam, the show features 55 paintings — 40 by Daubigny and 15 by those he inspired. It is the first time the artist has been the focus of a major international exhibition, and the Taft will be the only American museum to host the collection before it travels abroad.

For Ambrosini, the exhibition is the culmination of a 14-year journey that led her to 82 cities, ranging from Paris and Amsterdam to Santa Barbara, California, and Ithaca, New York, as she sought out works to include.

“Lynne opened my eyes to Daubigny’s genius,” says Deborah Emont Scott, the Taft Museum of Art’s director and CEO. “This is the most ambitious project the Taft has undertaken.”

Shortly after Ambrosini became the assistant curator of paintings at the Minneapolis Institute of Art in 1987, two pieces from the museum’s collection caught her attention. Daubigny had created them both, yet they were vastly different.

“The Crossroads of the Eagle’s Nest,” completed in 1844, is dominated by dark masses of trees made to replicate the forest of Fontainebleau, located southeast of Daubigny’s native Paris. He painted it over multiple sessions, using tiny brushes to create thin lines and letting each layer dry before applying the next.

In contrast, “The Dunes at Camiers,” which Daubigny finished 27 years later, was created with paste-like pigments spontaneously applied with broad strokes. The artist also used a much lighter color palette in his depiction of the sand along France’s northern coast.

“I saw these paintings at the same time, and I puzzled over them,” says Ambrosini. “How could the same person have painted both? I knew there was a story here.”

She discovered, however, that not much had been written about Daubigny during his life or after his death in 1878.

“There were times when I felt that I was the only one who knew what a great artist he was,” Ambrosini says.

Born in 1817, Daubigny was closely associated with the French realist painters who were committed to representing subject matter truthfully. As synthetic pigments became available, Daubigny swapped the somber colors of mineral-based paints for early incarnations of the vibrant hues that would usher in impressionism. He also pioneered the practice of painting outdoors to capture the nuances of changing light and weather.

“Unlike earlier landscape painters who focused on such permanent elements as the contours of a hill, Daubigny concentrated not so much on the outline of the hill, but on the fact that it looks rosy-red in the morning and blue-green at night,” Ambrosini says. “The impressionists would follow that lead.”

Daubigny’s choice of flowering orchards as subject matter during the 1850s also caught the public’s attention.

“Landscapes had been devoted primarily to images from history or classical antiquity and often included figures from Greek mythology or the Bible,” Ambrosini says.

Daubigny also originated the idea of working from the bow of a boat. Beginning in 1857, the artist traveled up and down the Oise River in a ferryboat in order to paint views not visible from shore. Spotlighted in the Taft exhibition, Daubigny’s 1863 work “Banks of the Oise at Auvers” exemplifies the play of light and shadow on water.

“He became known for painting these lively new landscapes from the vantage point of the river,” Ambrosini says.

Recognizing a good idea from a fellow artist, Claude Monet launched his own studio boat to achieve similar views. “The Seine at Bougival, Evening,” which the impressionist painted in 1869 (also featured in the Taft exhibition) depicts sunset from a similarly low angle.

But no greater tribute was paid to Daubigny than that given by post-impressionist painter Vincent Van Gogh. The artist lived the last two months of his life in Auvers, the riverside village in France where Daubigny had resided before his death 12 years earlier. Upon his arrival on May 20, 1890, Van Gogh visited Daubigny’s widow, Sophie. The artist received permission to paint the couple’s garden and did so three times before his death on July 29, 1890. One of Van Gogh’s depictions of “Daubigny’s Garden” is part of the Taft exhibition.

A longtime admirer of his predecessor, Van Gogh once wrote his brother Theo praising Daubigny’s work.

“If understood, [it] touches us more deeply than one realizes,” Van Gogh wrote. “It must be good to die in the knowledge that one has done some truthful work and to know that, as a result, one will live on in the memory of at least a few and leave a good example for those who come after.”