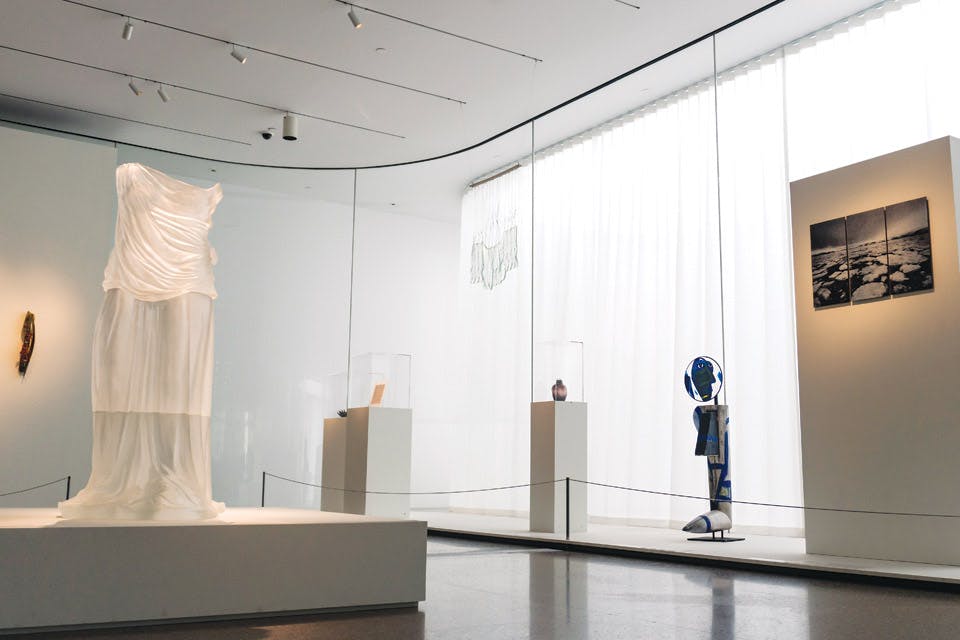 The Toledo Museum of Art honors the medium it helped launch with “Fired Up: Contemporary Glass by Women Artists.”

Laura Donefer worked in painting and sculpture before signing up for classes at Sheridan College’s craft and design program in Ontario. But it was the art of glass blowing that ultimately seduced her when she was a student there.

“I was unfulfilled because my hands were not breathing,” Donefer says. “But that changed once I entered the school’s hot shop and began working with glass. ... When you work with it, it’s like you’re doing a dance with it. It’s like this amazing lover: If you get too confident with it, it gives you a little kick and something happens to what you’re working on and you have to start over. You have to spend years figuring it out, and you never really figure it out.”

The Harrowsmith, Ontario-based artist is one of 45 women featured in the Toledo Museum of Art’s “Fired Up: Contemporary Glass by Women Artists.” The exhibition, on display through March 18, showcases 56 works ranging from pieces created by innovators in the Studio Glass Movement of the 1960s to those forging paths with modern 21st-century works. Donefer created “Blizzard Amulet Basket,” which is featured in the show, to capture the look of her snow-covered backyard after a storm. The opaque white piece, which she designed in 2007, is formed with cut glass. Flame-worked hot glass fragments represent tree branches coated with ice.

Jutta-Annette Page, former senior curator of glass and decorative arts at the Toledo Museum of Art, co-organized “Fired Up: Contemporary Glass by Women Artists” last year for The Mint Museum in Charlotte, North Carolina. It served as the ideal complement to the exhibit the Mint was presenting on “Women of Abstract Expressionism.”

“There are so few traveling exhibitions focusing on glass because it is so fragile and very complicated to transport,” says Page, now founding executive director of Old Dominion University’s Barry Art Museum in Norfolk, Virginia. “The Toledo Museum of Art is the only other venue for this show.” 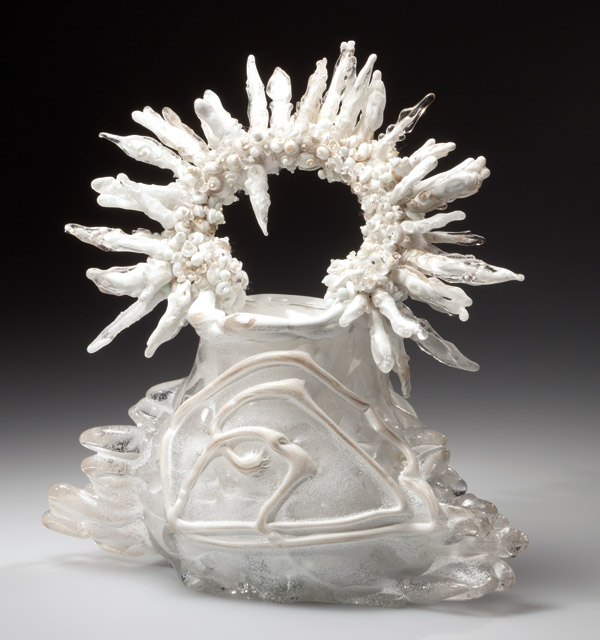 Glass as an American art form began growing in the 1950s, when artists interested in the medium started searching for new ways to use the material that were not tied to industry. Harvey K. Littleton, a teaching ceramist at the University of Wisconsin, began working with hot glass in 1958 after experimenting with it at Corning Glass Works.

He joined forces with the Toledo Museum of Art four years later to conduct a workshop exploring ways artists could create works from molten glass in their own studios, instead of in factories. The groundbreaking class earned the museum the distinction of being heralded as the birthplace of the American Studio Glass Movement. As the medium gained a following, those who developed the craft were celebrated. Although women were part of that effort, it was the men who received most of the recognition.

“Why weren’t women recognized?” Page asks. “It’s for the same reason most of us aren’t paid as much as men are in the workplace. ... But women are finally coming into their own.”

Donefer recalls that she was one of only a handful of female students attending classes at the Pilchuck Glass School in Seattle during the early ’80s.

“Back then, it was always the men who were the big glass blowers,” Donefer says. “What I love about this show is that it recognizes the fact that women have been working in studio glass since it became popular.”

One of the art form’s pioneers was Ohio ceramic artist Edris Eckhardt, who experimented with glass and wax-casting techniques from the basement of her Cleveland home in the 1950s. Those efforts led to the discovery that glass could be melted at lower temperatures, which could be sustained in small studios.

While developing a stained-glass curriculum for the University of California at Berkeley in 1962, Eckhardt created “Ancient Splendor,” a bronze sculpture filled with more than 150 softly rounded glass chunks meant to replicate precious gems. The abstract pattern suggests an unearthed artifact from an ancient civilization. Eckhardt, who died in 1998, described herself as an artist who works “in glass from an artist’s viewpoint, not a craftsman’s — as I am a sculptor.” 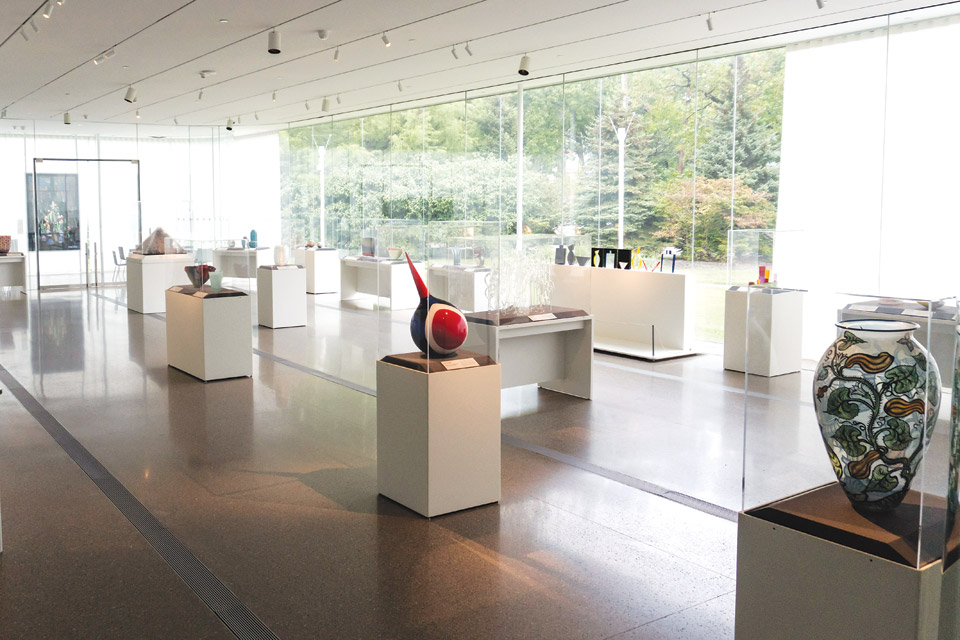 Halona Norton-Westbrook, director of collections at the Toledo Museum of Art, describes Karen LaMonte’s “Dress Impression with Train,” as an “intricate experimentation in how to represent the body as it’s been played out in classical art history yet focus on its absence.”

To create her 2007 crystalline piece, LaMonte made a plaster mold of a model’s body and created a rubber positive of it. She then took an impression in wax from the rubber form to make a hollow mold of the body’s shape, which gave her the interior of the sculpture. To create the outer layer of the piece, the artist dressed the rubber form in an evening gown, using hairspray to stiffen the folds of the dress so they retained their shape while she painted it with hot wax. As the final step, LaMonte cast both molds together in glass. The process allowed the hollow inner cavity to retain the imprint of a body and let light pass through the form.

“The artist uses her glass forms to investigate the premise that clothing is both revealing and concealing at the same time,” Norton-Westbrook says. “And of course, with this piece you so much have the presence of the body without the actual body. That makes it very compelling.”

Toots Zynsky’s 2000 vase, “Serata,” featured in the show, is based on using filet de verre, or glass threads, to create what she calls a “crumpled” bowl effect. Zynsky had already perfected her process of constructing glass objects with pulled threads of glass in the ’70s. But while working in Italy in 1984, she became nervous in front of a group observing her.

Unhappy with the way one of her containers was turning out, she reached into the kiln, grabbed it and gave it a tight squeeze. As she writes in the notes accompanying the exhibition, “Finally, I got the form that I wanted! And I thought, Why didn’t I think of this before?”

Like a painter wishing to make an abstract canvas, Zynsky dribbled a palette of colors over her concave glass core, giving “Serata” a translucent sheen.

“If there’s one common thread in this exhibition, it’s the fact that women have this incredible focus and vitality when it comes to working in glass and making it totally their own,” Page says. “Whether it’s clipping broken LCD glass from recycled cellphone covers into shards, like Josepha Gasch-Muche did in 2009 to make “Pyramid” — which is in our exhibit — or like Toots did, women artists have proven they are entirely capable of finding their own path and being fantastic role models to future generations.”