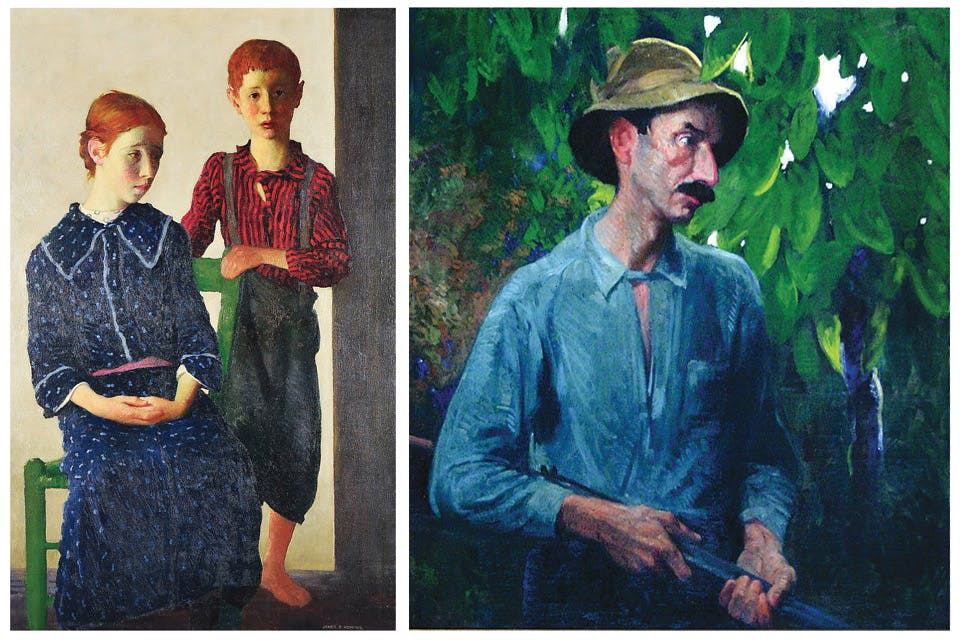 Faces of the Heartland

David Stark is hard-pressed to name a favorite painting in “James R. Hopkins: Faces of the Heartland,” but he returns again and again to the oil painting he describes as being not only memorable but also mystifying.

“Brother and Sister,” which Ohioan James R. Hopkins painted between 1915 and 1917, depicts two siblings from the Cumberland Falls region of Kentucky, a place the artist drew inspiration from during summer sojourns. With hands folded in her lap, the girl in the painting primly perches on a ladderback chair as her younger brother shyly stands by her side.

“I believe this is one of the most poignant images Hopkins created,” says Stark, chief curator at the Columbus Museum of Art. “Although there’s a sadness on their faces that borders on mournful, there’s a great dignity and quiet strength about these mountain people.

“And the artist has left us with so many questions,” Stark continues. “Did he see the pair positioned this way at a certain point or did he make an artistic choice about what would be most effective for the painting? Did they come to his studio or did he paint them in their natural environment? Are they dressed in their Sunday best or are these the clothes they wear every day? The fact that Hopkins’ work poses so many questions that remain unanswered adds to its beauty.”

“James R. Hopkins: Faces of the Heartland,” on display at the Columbus Museum of Art through April 22, is the first retrospective of the artist’s work since 1977. It features more than 50 paintings and prints, including a survey of Hopkins’ early figural images and portraits. But the oils the artist completed in southeastern Kentucky are clearly the focal point.

“Those paintings are the ones that put him on the map,” says Mark B. Pohlad, associate professor of art history at Chicago’s DePaul University and author of James R. Hopkins: Faces of the Heartland, the 2017 biography that serves as the exhibition’s catalog.

“Nobody had ever painted that population before,” Pohlad adds. “Over the last election year, talk has turned to the plight of coal miners and the people of Appalachia. Hopkins was the artist who painted the ancestors of that population. There’s nothing else like these paintings in American art history.”

Born on a farm in Irwin, Ohio, in 1877, Hopkins would ultimately realize a distinguished teaching career at The Ohio State University from 1923 to 1947, which included becoming the chair of the art department and raising its stature to national acclaim. (Hopkins Hall, which houses OSU’s Department of Art is named after him.)

But before entering academia, Hopkins was a prolific painter. He inherited a strong appreciation of the art form from his mother. Although he flirted with the study of electrical engineering at The Ohio State University, Hopkins opted to transfer to the Columbus Art School (now the Columbus College of Art and Design) in 1897. After marrying fellow artist Edna Boies — who would become known for her woodblock prints — the couple set out for France in 1905. 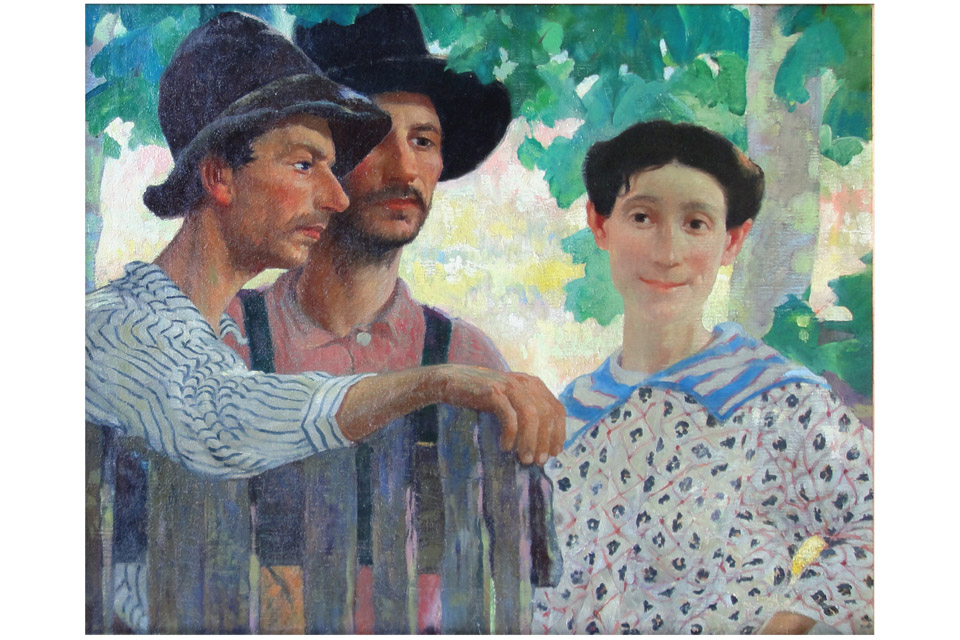 “Under the Sycamore” is included in the “James R. Hopkins: Faces of the Heartland.” The exhibition is the first retrospective of the artist’s work in decades. (artwork courtesy of Columbus Museum of Art)

“During the nine years he spent there, he developed friendships with many of the leading artists of the day, visited the studios of Claude Monet and honed his technique in painting the human figure, which included nudes and beautifully dressed women,” Pohlad says.

As the storm clouds of World War I gathered over Europe, the couple returned to Ohio, where Hopkins secured a teaching position at the Art Academy of Cincinnati. During summer breaks in 1915, 1916 and 1917, James and Edna would cross the state line into Kentucky and vacation at Cumberland Falls, a tourist destination known for its spelunking opportunities and a 125-foot-wide curtain of water known as Niagara of the South.

“During the first summer Hopkins spent there, he painted few pictures of the mountain inhabitants,” Pohlad says. “It was not until his time there was almost over that his eyes were opened to the possibilities of what was around him.”

For the next two seasons, the artist would check into the Brunson Inn, seek out Andy Vanover — the inn’s multitasking tour guide, handyman and chauffeur — and ask him to assume a variety of poses for what would become more than two dozen paintings.

They range from Vanover holding a pair of chickens for “Market Day in the Mountains,” to brandishing a firearm against a backdrop of thick foliage in “Mountain Man,” to a scene in which the affable model is lost in contemplation with legs outstretched while “Restin’ ” on the Brunson Inn veranda.

“Clearly, Hopkins realized that Andy’s appearance, manner and background in the region made him an authentic representative of it,” Pohlad says. “Upon meeting him, Hopkins must have also realized he had the picturesque qualities of a model.”

In “The Mountain Preacher,” Pohlad explains, Vanover is depicted in his real-life role as a traveling pastor, which served as a reminder of the importance religion held in the lives of the artist’s subjects. The tack worn by the mule includes a fine saddle and full stirrups, which leads to the speculation that the Brunson Inn owned the animal rather than the model himself.

“Society often paints condescending images of mountain folk,” Stark says. “We tend to look at them through a stereotypical lens as being like the comic strip ‘Li’l Abner’ or the TV show, ‘The Beverly Hillbillies.’ James R. Hopkins brought the lives of the people he depicted into the lives of the larger public. He showed us how unfair those negative portrayals really are.”