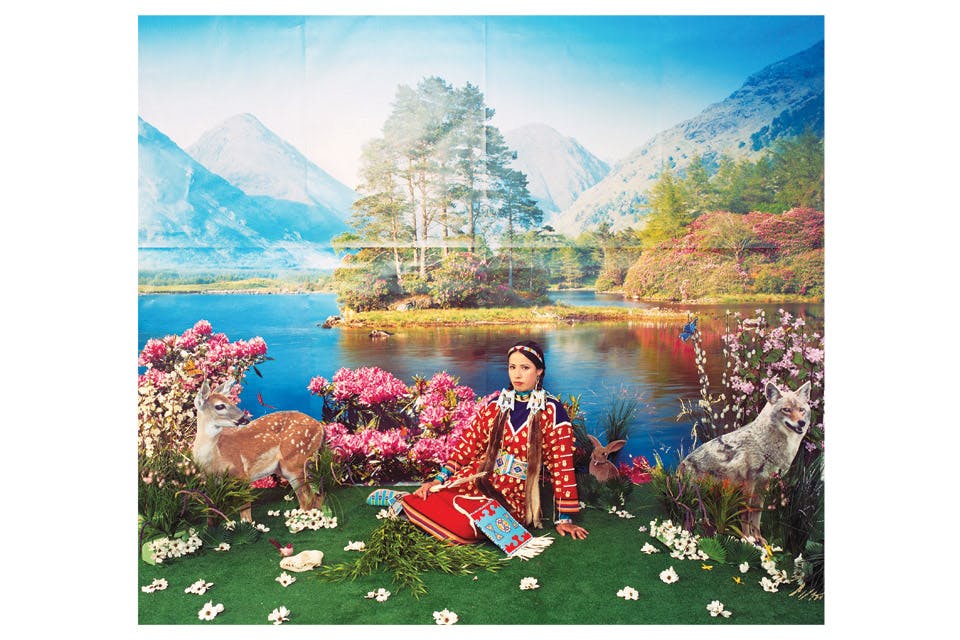 Halona Norton-Westbrook, director of curatorial affairs at the Toledo Museum of Art, understands why some visitors express surprise while looking at “Expanded Views: Native American Art in Focus.” The vibrant patterns, colors and textures inherent in the 30 objects from the museum’s collection, on display through April 28, are familiar because they’ve been woven into the fabric of our country’s past.

What’s unusual is the fact they’re being showcased in a gallery that’s adjacent to magnificent American masterpieces the institution is known for. To Norton-Westbrook, it’s an inclusion that’s long overdue.

“Native American art truly does belong in a museum, and having it here is part of our rethinking of what constitutes American art,” the curator says. “Although many of the works were designed by people who didn’t consider themselves artists, they were, nonetheless, creating objects of fantastic craftsmanship and supreme beauty which we feel are very appropriate to exhibit.”

The idea to expand the Native American collection was sparked three years ago when the museum hosted “Indigenous Beauty: Masterworks of American Indian Art from the Diker Collection,” a touring exhibition of 120 objects acquired by New York collectors Charles and Valerie Diker.

“Our Native American collection was so small back then it was completely forgotten within the context of that show,” Norton-Westbrook says. “Most of the objects we owned had been given to us in the 1940s. Having ‘Indigenous Beauty’ here really opened up a conversation about how we were going to grow our collection. The museum has tremendous strengths that we’re extremely proud of, but it does not present as complete a picture as we’d like in terms of telling the story of the art of the world. Native American art has played a very important role in the history of this country, and we became committed to expanding our global collection to include objects [of cultures] that have been underrepresented.”

The works contained in “Expanded Views” do not represent a singular community, perspective or moment in time, the curator explains. But taken together, they offer a glimpse into the variety of customs the art encompasses.

“Native American art is very rich and diverse depending on what part of the country you’re looking at,” Norton-Westbrook says. “There are tribes all across the United States, and each have their own traditions which define them. In the southwest, you find very strong traditions of pottery-making, but the Plains Indians and those living in the east were known for their beadwork. What ‘Expanded Views’ does is offer a sampling of singular masterworks from around the country.” For centuries, tipis served as an integral part of Cheyenne culture as the tribes of the Great Plains transitioned from earth-lodge-dwelling farmers to buffalo-hunting warriors living in cone-shaped tents. The model tipi cover in the exhibition was fashioned from hide, paint and sinew about 1860 to commemorate a sacred form of life that was being dislodged by threats from settlers, railroad expansion and the U.S. government.

“This decorative object kept the heritage alive and helped instruct children and other members of the community in the traditions of the past,” Norton-Westbrook says. “The sky and the earth are symbolically depicted by the dyed blue backgrounds on the top and bottom. The horses, shown in profile and midstride, represent the cultural values of power, wealth, prestige and courage the Cheyenne associated with ownership of the animals in the 19th century.”

The Pueblo Indians of Arizona and New Mexico are known for the exquisite pottery they’ve crafted for more than a thousand years. The polychrome pottery jar selected for inclusion in the exhibit, made between 1865 and 1875, was used to store and transport wheat and corn. The black geometric design, buff-colored clay and cream glaze are hallmarks of the Santo Domingo Pueblo (now known as the Kewa Pueblo). Ledger drawings emerged during a critical time in Native American history as land disputes between native tribes and white settlers escalated. The watercolor, graphite and colored pencil work featured in the exhibition was created by a member of Crow Nation about 1890. It depicts a woman attired in a traditional dress decorated with the elk teeth that were considered a status symbol astride a horse and carrying weapons.

“Crow drawings are far less common than those produced by the Cheyenne during this period,” Norton-Westbrook says. “This is an incredibly faithful reproduction of the ceremonial regalia that was worn back then.”

Two of the artists included in the exhibition present their impressions of the Native Americans featured in distinctly different ways.

Famous for his depictions of cowboys, soldiers and Native Americans of the Old West, Frederic Remington captured “Indians Simulating Buffalo” on canvas in 1908. The focal point in the oil painting is the glance exchanged by two tribesmen engaged in the time-honored hunting trick of disguising themselves as bison in order to scout buffalo — or perhaps in this case monitor the approach of white settlers riding in the wagon train barely discernible in the background.

“This is a much-loved work from our collection, which the museum purchased in 1912, and it was great to display it in a different context,” Norton-Westbrook says. “Remington usually showed Native Americans in a less positive light — often as aggressors — but this is more of an ambiguous image, which is interesting in that way.”

Ninety-eight years later, Wendy Red Star, who was raised on the Crow reservation in Montana, used photography, sculpture, video and performance to examine her family’s ideology and the world’s perception of it.

“Red Star is known for playing with different stereotypes about Native Americans, but also reflecting on where she might fit into the general scheme of them,” the curator says. “While doing so, she raises some important questions about the way we think about Native Americans and their culture. Her work merges the romantic notions with the reality of the 21st-century world we live in.”

In “Four Seasons,” a series of landscapes she created in 2006, Red Star donned traditional Crow dress and posed with plastic flowers and cardboard cutouts of animals. Her intention was to draw attention to mainstream America’s tendency to create one-dimensional narratives and labels about Native Americans that are absurd.

“We feel it’s really important to honor these cultures that have suffered from displacement, but are still very true to strong traditions that continue to this day,” Norton-Westbrook says. “I’m continually in awe of the beauty and diversity of historical and contemporary Native American artwork that has really compelling stories to tell our visitors.”