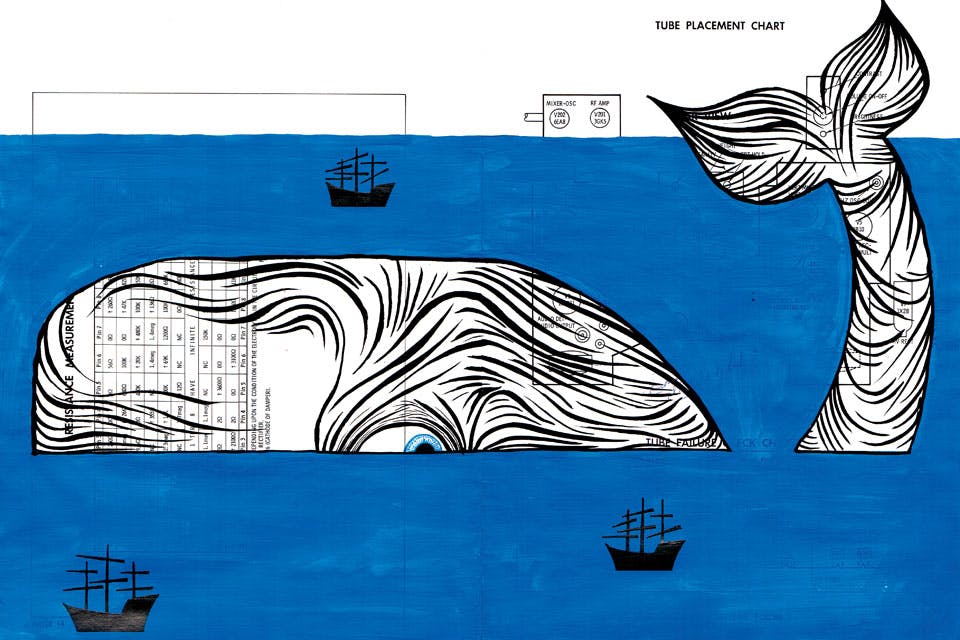 While his classmates at Marion L. Steele High School in Amherst were practicing foul shots and playing video games, Matt Kish was happily ensconced in his bedroom, poring over favorite passages from Moby-Dick. His ardor for Herman Melville’s tale of Captain Ahab’s pursuit of history’s most famous marine mammal never waned. So, on Aug. 5, 2009, Kish embarked on his own journey. The Beavercreek-based illustrator began creating images based on the classic novel, using a variety of mediums and often incorporating pages from discarded manuals and old books. He made one piece of art a day for 18 months — each coinciding with a page of the Signet Classic paperback edition. After getting Moby-Dick In Pictures: One Drawing for Every Page published in 2011, Kish applied his talents to another literary favorite, Heart of Darkness. He created an illustration for each page — 100 in all. That book was published in October. We recently talked with the 44-year-old illustrator about the novels that inspired him and his grueling creative process. 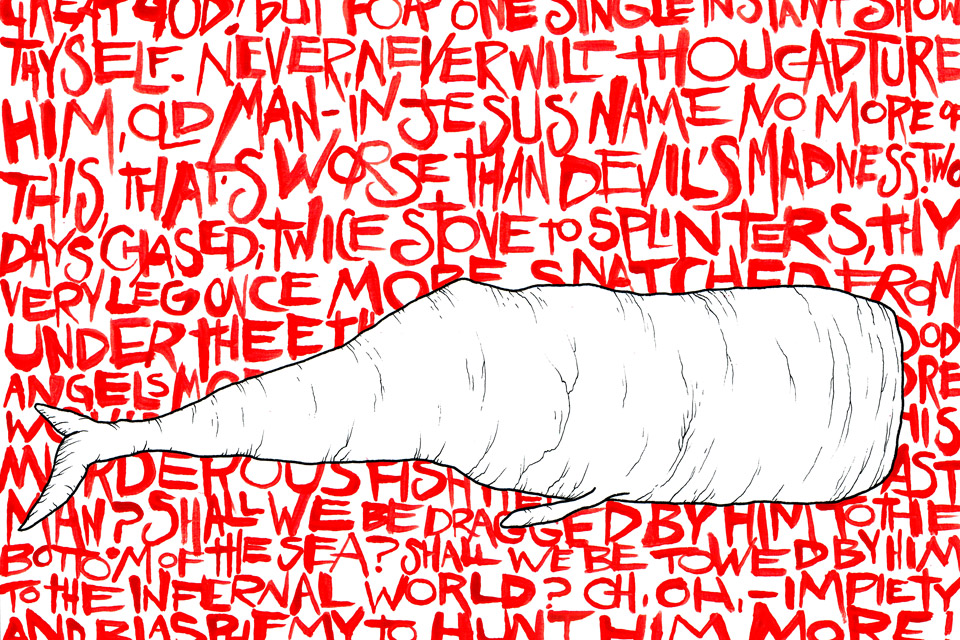 So, unlike so many of us, you never relied on CliffsNotes to tackle your high school reading list?
Well, no, I always loved reading. But my first introduction to Moby-Dick was purely a visual one that happened when I was 8. On Saturday afternoons, my father used to drop me off at my grandmother’s house while he ran errands. Usually, I’d sit in front of the TV and watch monster movies. But one day, he was late picking me up, and the movie “Moby Dick,” starring Gregory Peck, came on. I was actually a little bored… But I kept watching because there was nothing else to do. Soon, the screen filled with these images of a white whale. They blew me away. My father explained to me that the movie was based on a book and bought me an abridged version for kids. One of the notable things I loved was that every page of text was faced with an illustration. 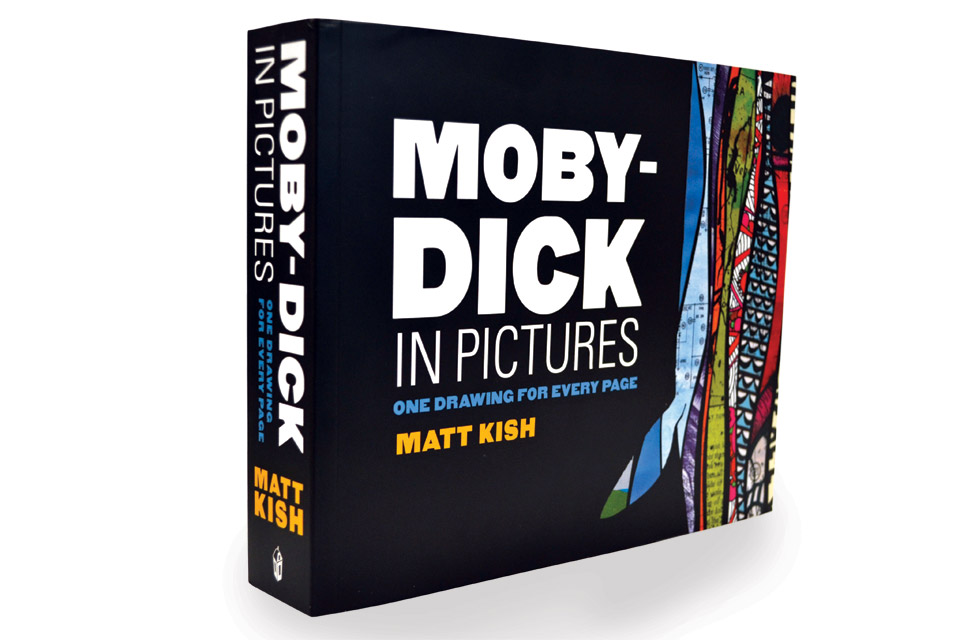 Matt Kish created one work a day for more than 18 months to complete Moby-Dick in Pictures: One Drawing for Every Page, which weighs more than four pounds.

Moby-Dick and Heart of Darkness seem like two very different novels. What drew you to them?
Literally, everything one might need to know to make one’s way through life is contained in some way within these books — the light and the dark, the good and the bad. On the surface, Moby-Dick appears to be just the story of a man’s obsession with chasing a whale and the adventure that goes along with that. But there’s also this vast mosaic of ideas that Melville touches on — religion, spirituality, sexual identity, brotherly love, the history of the United States, God, humor. Heart of Darkness came to me much later in life, when I was a high school senior. A friend of mine had gone off to college, and recommended it. Joseph Conrad’s novel is the flip side of Herman Melville’s coin. Moby-Dick is a story of hope. Heart of Darkness presents a very jaundiced look at the horror of human existence.

How did you come up with putting an artistic spin on these classic texts?
The year 2009 was a major turning point in my life. I had just turned 40 and been working as a librarian for the Dayton Metro Library system. I began to think it was time for me to stop making art. I’d always liked to draw but never had any real financial success doing it. So, I decided to do one incredibly stupidly ambitious thing: Create one illustration for every page of Moby-Dick, the book that means so much to me. I thought that at the end, if I finished, I would have a stack of drawings that I would be able to look at and feel very proud of and that would be it.

Your work on Moby-Dick in Pictures, 552 illustrations, seems to be quite a commitment. How daunting was it?
I spent a lot of time laughing madly to myself as I spent all of my free time sitting alone in a closet that serves as my home studio. What kept me going was pure obsession. I followed a kind of tunnel vision, becoming so immersed that everything else fell by the wayside. I am deeply indebted to my wife, Ione Damasco, for doing the shopping, the dishes and the laundry, mowing the lawn and offering the support I needed to keep going. 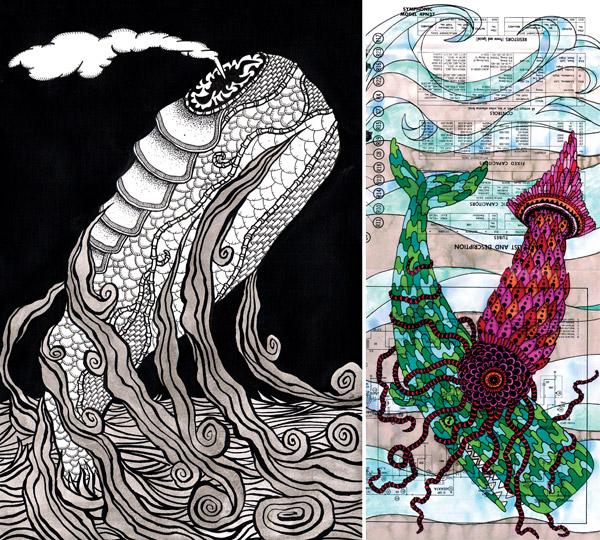 Matt Kish created one work a day for more than 18 months to complete Moby-Dick in Pictures: One Drawing for Every Page, which weighs more than four pounds.

What in your opinion makes a book withstand the test of time?
There has to be universality to the story. We need to see ourselves in these books. Like Moby-Dick [1851] and Heart of Darkness [1899], they have to speak to us no matter when they were written. They are, in a sense, a mirror we can hold up and see our own lives reflected in.

What’s next? Are there any other books you’d like to do this with?
I’m planning that the third in my trinity of books will be A Voyage to Arcturus, an obscure novel published in 1920 by David Lindsay. ... [It] tells the story of a man from Earth who travels to the planet Arcturus. In each chapter, he meets a new being who represents a different philosophy or religious conviction. Based on his conversations, the Earthling begins questioning his own belief system. I hope 21st-century readers will be as riveted as I am with the plot.

For more information about the art of Matt Kish, visit matt-kish.com.