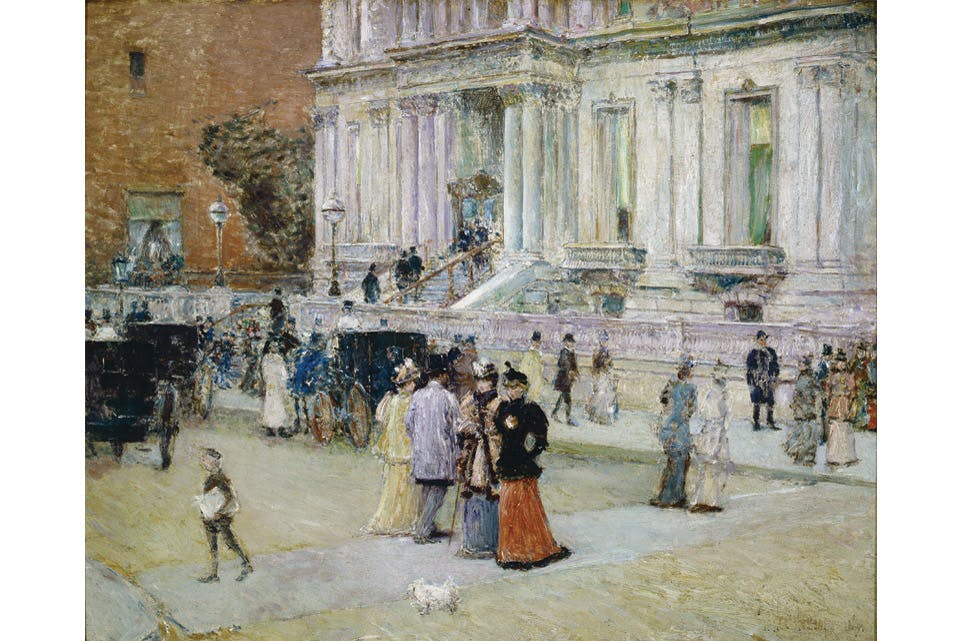 The Taft Museum of Art examines how artists captured westward expansion and the maturing of a young nation.

As Lynne Ambrosini puts the finishing touches on the Taft Museum of Art’s new exhibition, she pauses before an image that’s clearly one of her favorites in the show: “The Lady in Pink (Portrait of the Artist’s Wife),” painted by American artist William Merritt Chase in 1886.

“This is so sensual,” the Cincinnati museum’s director of collections and exhibitions marvels. “It’s a beautiful harmony of rosy pinks and golds. Notice the texture of [the subject’s] garments are only suggested, not precisely defined, which creates a sense of depth and atmosphere. Chase’s work is a magnificent illustration of how art for art’s sake was becoming possible in America.”

From Feb. 6 through May 24, the Taft Museum of Art will present “Wild West to Gilded Age: American Treasures from the Santa Barbara Museum of Art,” an exhibition comprising 52 paintings and eight sculptures from the California arts center. Each was created between 1830 and 1920 — a time, explains Ambrosini, when the United States grew from a contained East Coast society built on agriculture and trade to one that became a sprawling colossus through industrialization.

“The exhibit is really about the maturing of America,” Ambrosini explains. “It was a 90-year period of time that saw a tremendous caterpillar-into-butterfly transformation of our country.”

Gone was the staid adherence to old-world European subjects and styles. Instead, America’s metamorphosis following the Civil War led to greater sophistication in the way art was created and the birth of genuinely American forms of art.

“In the third quarter of the 19th century, artists traveled to Rome, Munich and Paris to learn the basics of making art,” the curator says. “They returned to the U.S. fully equipped to render its natural beauty and scenes of daily life, and did so with flair and confidence. American painters and sculptors had found their own voices.”

Improvements in oil paints also played a pivotal role. “As America changed, so did the paint. The earliest landscapes were tentative, created with old-fashioned pigments that were primarily available in earth tones. But as synthetic paint was developed, the palette opened up into brilliant hues that transformed the art of painting.”

Ambrosini cites “View of the Beach at Beverly, Massachusetts,” painted by John Frederick Kensett in 1860, and George Inness’ 1894 work, “Morning, Catskill Valley,” as prime examples of the burgeoning presence of color on canvas and the reflection of life as art.

“The idea that the United States was a natural paradise, a virgin territory, was a concept artists enjoyed capitalizing on,” she says. “It became a perception that the American public began to identify with — the image of an expansive continent filled with unseen beauty and rumors of astonishing mountains in the West and vast forested tracts in the North.”

In his view of Massachusetts’ north shore, Kensett depicts the coastline bathed in clear sunlight and filled with the inherent beauty of craggy rocks, lapping water and scattered pieces of driftwood.

“There’s a sailboat and the presence of people, but the objects are very sparse,” Ambrosini says. “They do not detract from the spare, untouched feeling the painting evokes — that of a secret new world that’s ripe for the taking.”

Inness opted to fill his serene landscape with a lively intensity that exceeds the norms of nature and, as a result, brings brilliant vitality to the scene. “[The artist] adhered to the religious doctrines of [Swedish theologian] Emanuel Swedenborg, who preached that the spiritual world was imminent in the physical world,” Ambrosini says. “So, most of Inness’ works have a misty, intensely colored quality that alludes to his beliefs.”

Coinciding with westward expansion, traveling painters captured such majestic sites as the Rocky Mountains, the Grand Canyon and Yosemite, which provided rationale for the belief that the United States was destined to spread from coast to coast. Among the most popular motifs were heroic cowboys riding the range, roping cattle or taming horses. Images of American Indians were just as popular with patrons. The wonders of the West are embodied in Frederic Remington’s bronze sculpture “The Mountain Man” and in his oil painting depicting a “Fight Over a Waterhole.” 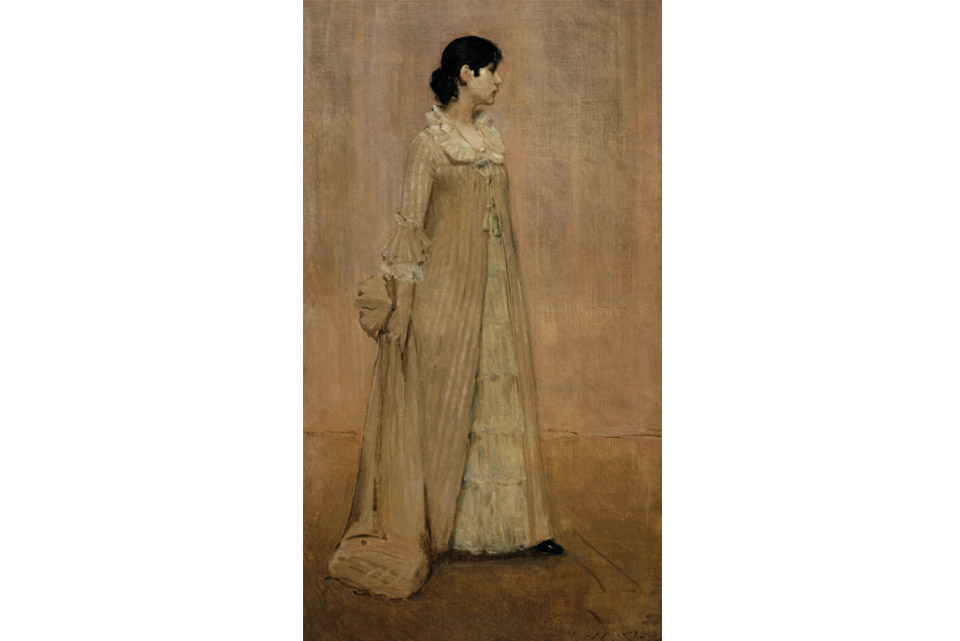 “Remington became famous as an illustrator and wrote short stories for Harper’s Magazine,” the curator says. “His work has this illustrational quality, [and] he defines all the forms precisely. In ‘Mountain Man,’ we see the texture of the leather chaps and the ruggedness of the mountain trail.”

Ambrosini adds that painter Frank Tenney Johnson’s idealized vision of a “Cowboy with Lasso on Horse” is the kind of image that remains fully entrenched in our culture today.

“Ironically, when these works were popular, this way of life was definitely on the wane,” she says. “Invariably, artists often depicted tribes living freely on the land and practicing traditional customs. It is sadly ironic that such themes flourished when these indigenous peoples had finally been conquered and dispossessed. And yet, Americans continued to heroize the West and make a myth out of it.”

But not every artist of the period was smitten with untamed views of nature. Heavily populated urban locales were also settings from which to draw inspiration.

Prolific American impressionist Childe Hassam is known for his paintings of fashionable places in New York City. His 1891 oil, “The Manhattan Club,” represents an elegant slice of life on Fifth Avenue. In an 1892 edition of Art Amateur magazine, the artist described his unusual method of working: “I paint from [horse-drawn] cabs a good deal. … I select my point of view and set up my canvas or wooden panel on the little seat in front of me, which forms an admirable easel. I paint from a cab window when I want to be on a level with the people on the street and wish to get comparatively near views of them, as you would see them if walking in the street.”

To the curator, the range of works featured in the exhibition offers a valuable lesson in art appreciation.

“Visitors are sure to be amazed at the richness of American culture represented here by artists they may not be familiar with,” she says. “You never know what will dazzle you.”