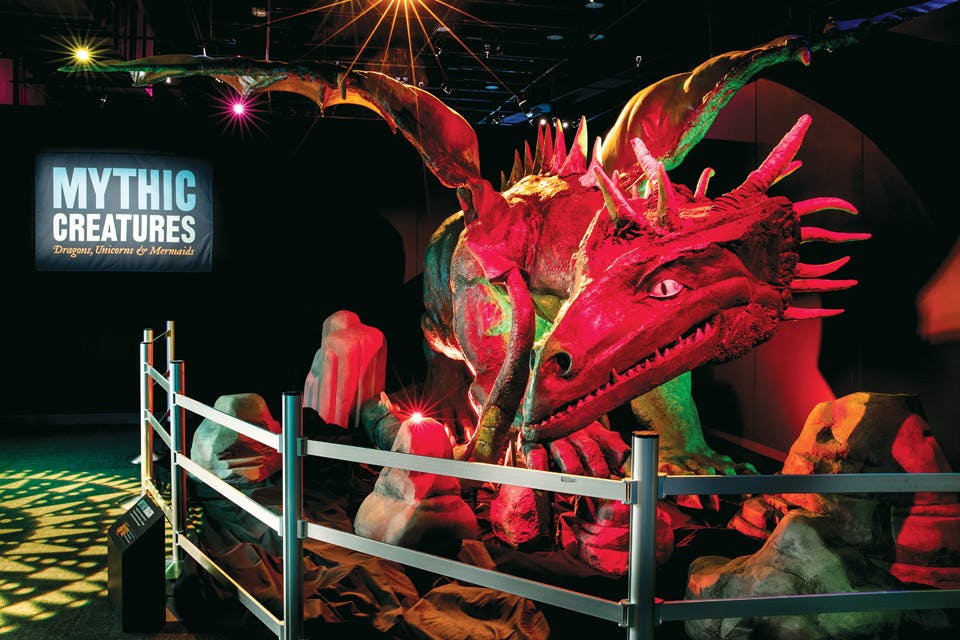 COSI’s new American Museum of Natural History exhibition delves into how legendary creatures have their roots in the real world.

COSI has long been known for making science fun for all ages, but through Sept. 2 it’s also delving into how things we think of as being totally make-believe are really based in fact. Organized by the American Museum of Natural History in New York, “Dragons, Unicorns & Mermaids: Mythic Creatures” looks at the ways nature has inspired cultures to depict extraordinary entities.

“On the surface, the exhibit may seem contrary to what we’re all about,” says Brianna Gribler, COSI’s director of strategic projects. “But it explores people’s attitudes and stories about things they saw but didn’t understand — a forerunner to today’s scientific process.”

In the exhibition, a 17-foot-long model of a snarling dragon thought to stalk Europe centuries ago is paired with a benevolent version revered in China.

“So why is it that two cultures have [different] attitudes around the same mythic creatures, and what were they seeing?” Gribler asks. “The answer may lie in the fact there’s evidence that as early as 500 B.C., Chinese scholars were misinterpreting fossil findings and putting dinosaur remains on display as dragons.”

The enormous bones of mammoths discovered by the ancient Greeks may have helped give birth to the legend of the one-eyed Cyclops, with the animals’ large trunk opening possibly being misinterpreted as a massive single eye socket.

The exhibition attributes mermaid lore in part to 16th-century Scandinavian sailors who mistook the manatees they encountered as half-human beings, giving rise to the tale of maidens with upper bodies of a female and the tail of a fish.

“When they arrived in port, the sailors would tell people what they saw,” Gribler says. “They’d seen a head bobbing in the water and a tail lifting up behind it, and their brain filled in the blanks.”