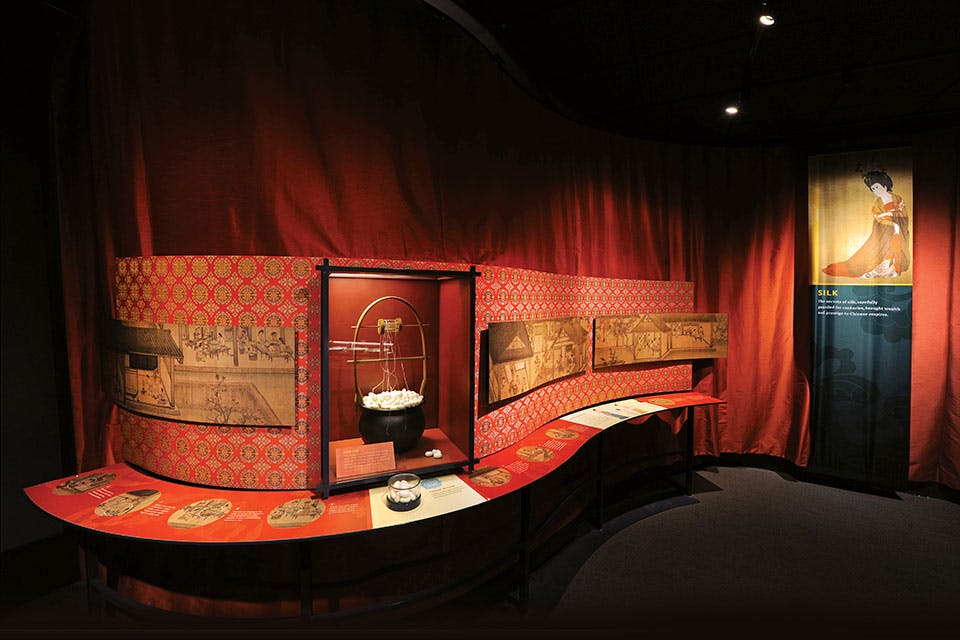 The Cleveland Museum of Natural History examines how the 4,600-mile Silk Road spread new ideas across the ancient world.

Known as one of history’s great trading routes, the Silk Road was also treacherous and inhospitable as it meandered over desert sands and through high mountain passes. Travelers made their way by camel caravan, and in between the long stretches of brutal terrain, they came upon progressive cities where not only material goods were exchanged but also ideas, stories and scientific knowledge.

“People kind of compare it to the Internet and the information highway we talk about today,” says Brian Redmond, curator of archaeology at the Cleveland Museum of Natural History. “Lots of innovations, technology [and] ideas went back and forth across that route.”

“The time period when the Silk Road was at its peak, from our Western-centric education, we kind of view this as the dark ages,” says Mark Norell, chair of the American Museum of Natural History’s Division of Paleontology and curator of the exhibition. “[In Asia,] it was anything but. These were the largest cities in the world [with] incredible amounts of both artistic and scientific sophistication.”

It’s believed the Silk Road started as early as 500 B.C., serving as a way to bring coveted Chinese fabrics to western cultures. Although silk remained a popular commodity on the route, trade expanded to include innovations of the time such as paper and gunpowder. The Silk Road also opened the door for the exchange of each civilization’s unique characteristics.

“This exhibit really isn’t about the artifacts,” explains Norell. “It’s more about cultural transmission … how they interacted with each other, [and] how they influenced each other.”

Museum visitors are first introduced to Xi’an, the cosmopolitan capital of China’s Tang Dynasty, which was home to nearly 1 million people. Here, the story of silk production is illustrated by way of a 17-foot-long replica of a Tang-era loom, as well as a display of live silk worms.

“The discussion of Xi’an [focuses] on  ... the production of silk, how it was discovered and how it was used to produce these fine textiles that were coveted in the west,” Redmond says.

Turfan, another stop along the Silk Road, offered travelers a break from their desert trek. Here, museum guests encounter a replica of a night market abundant with goods for trade. Textiles, dyes and spices are just a few of the items that were regularly sought.

“[Turfan’s] at the end of the Gansu corridor, so it’s a place where the north, south, east and west parts of the Silk Road would come into contact with one another,” Norell says. “It’s still a very lively and vibrant market town today.”

The city also played a vital role as a flourishing oasis. A model of a well (called a karez) is displayed to provide insight into the irrigation system that provided water for not only farms but also travelers and their thirsty camels.

As exhibition visitors move on to Samarkand, they’re introduced to the Chinese invention of paper with examples crafted from mulberry and hemp and manuscripts that highlight the use and production of paper goods.

“The Chinese had writing [and] they actually had block printing,” Redmond says. “Innovations like those, that we take for granted, came from the East.”

The final city featured is Baghdad — a center of scholarship, astronomy and scientific research. Much like the scholars of the time, guests can do their own stargazing and determine the time of day using a working model of an ancient astrolabe. Art was also important in Baghdad, and glass produced there was treated as a jewel as it traveled toward China. A collection of replica bowls and cups showcases the craft, which was developed in the Middle East around 100 B.C.

“The Chinese didn’t discover the science of glassmaking until about a thousand years ago, so glass was this highly coveted possession ... in the Tang dynasty just as silk was in Europe during that time period,” Norell says. 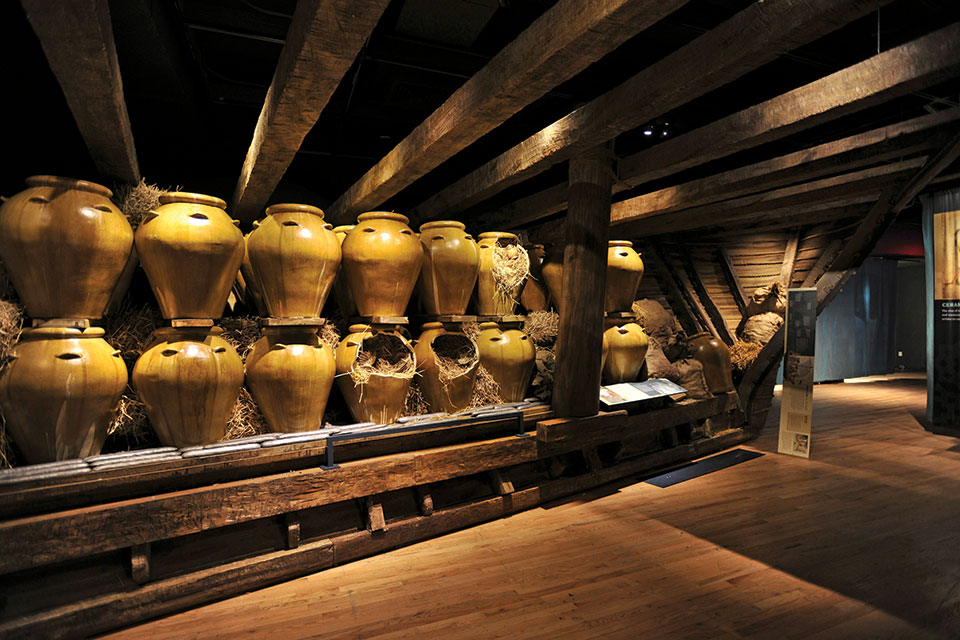 The journey for guests ends with a walk through a replica of an Arabian sailing ship.

Baghdad saw the arrival of goods by both land and sea, so the Silk Road journey for museum guests ends with a walk through a 41-foot-long replica of an Arabian sailing ship. By the end, Norell says, visitors will have an appreciation for how the historic trading route shaped cultures in interesting and unpredictable ways. “I think people will be really surprised that things they identify with one culture really came from another.”