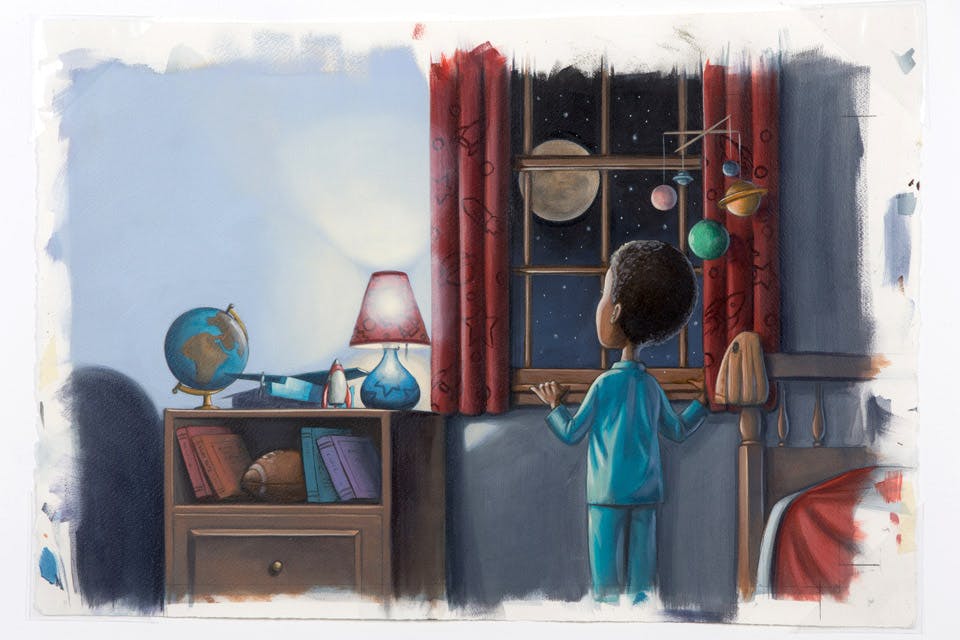 Rudine Sims Bishop has always been a voracious reader, but her voice is tinged with disappointment while recalling the lack of representation in the books she read as a child.

“It was impossible to find stories in the 1940s and ’50s that portrayed black people in a positive light,” says the professor emerita of education at The Ohio State University. “That really didn’t begin to happen until the late 1960s, when African-American artists and writers began to make their voices heard regarding the void of African-American books.”

Through June 30, the Miami University Art Museum is presenting “Telling a People’s Story: African-American Children’s Illustrated Literature,” an exhibition devoted to showcasing art that’s been published in picture books over the past 50 years. Composed of 130 paintings, pastels, drawings and mixed-media work created by 35 artists, the display commemorates the successes and struggles that serve as pivotal points in African-American history.

Themes and time periods covered include the middle passage voyages (which began in the 1600s when millions of Africans were sent to America as part of the slave trade), slavery, the underground railroad, emancipation, segregation and the civil rights movement. Images of historical figures in politics, music, sports, arts and entertainment are also featured.

“We see ‘Telling A People’s Story’ as not only supporting social justice initiatives at the university, but also highlighting works that rarely get the attention they deserve,” says Jason Shaiman, curator of exhibitions at the Miami University Art Museum. Shaiman and a team of educators combed through more than 600 books and 14,000 illustrations to select images for the exhibition.

“Choosing the works that would be included was a daunting task,” Shaiman says. “We felt that because this is an art exhibit, the artwork needed to come from African-American illustrators and, as often as we could, books that were written by African-Americans. We found so many wonderful examples that there’ll probably be a second exhibit in the future.

Although the majority of illustrations featured were created for books geared toward elementary school children, Shaiman says there were artists who opted not to shy away from mature subject matter for that age group. He points to The Middle Passage: White Ships/Black Cargo, written and illustrated by Tom Feelings in 1995, as one of those heartrending examples.

Through 64 paintings, Feelings tells the story of the pain and suffering enslaved Africans felt on their horrific journey across the Atlantic Ocean. With minimal text, the author depicts the cramped conditions and filthy quarters occupied by slaves shackled together two by two, and portrays lifeless bodies being thrown overboard to reduce the chance of disease.

“If you look at these haunting and scary images, you’d probably say, ‘I would never show these to young children,’ ” Shaiman says. “But Tom did not whitewash stories. His belief was that if you tell it the way it is, it might be frightening, but people will learn the truth.” 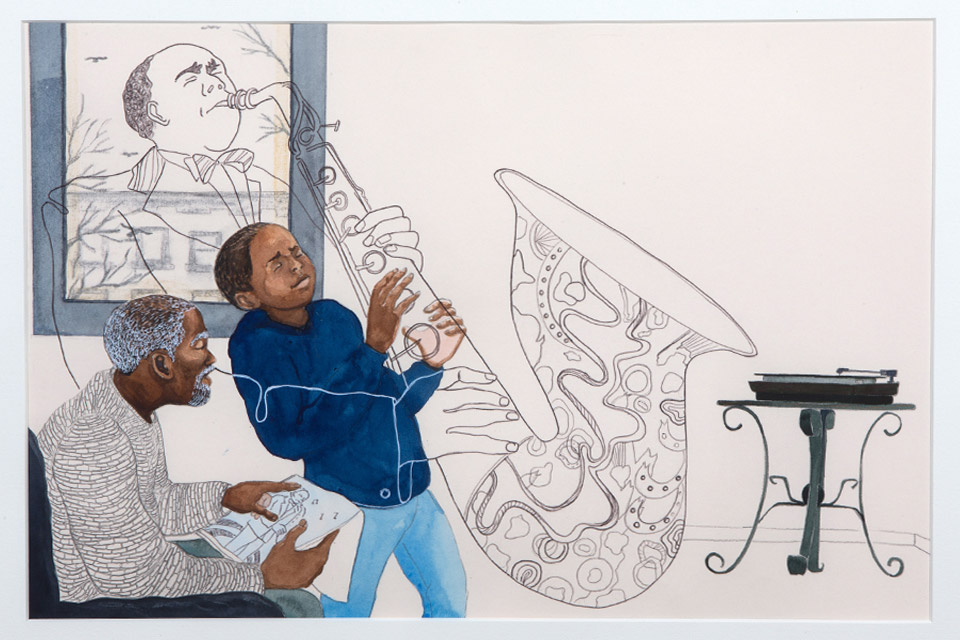 The curator contrasts those likenesses with the ones created by Don Tate for Ron’s Big Mission. Written by Rose Blue and Corinne J. Naden in 2009, the book recounts the inspiring story of Ron McNair, who grew up in 1950s South Carolina but did not let segregation keep him from pursuing and fulfilling his dream of becoming an astronaut.

In 1984, McNair became only the second African-American to reach space, serving as a mission specialist aboard the space shuttle Challenger. Two years later, he lost his life along with six other crew members when the Challenger exploded 73 seconds after its 10th launch.

“Don’s illustration ‘Watching the Moon’ beautifully captures the story of a child who loves space,” Shaiman says. “He really wants to go to the library and check out books about planes and flying, but couldn’t because of segregation. Don is known for creating lively and colorful illustrations of amazing historical figures. Readers can’t help but gravitate toward them visually before being captivated by the story itself.”

Tate also illustrated Audrey Vernick’s 2010 book, She Loved Baseball: The Effa Manley Story, an ode to the first woman to become an owner of a baseball team, included in the exhibit. Manley and her husband Abe co-owned the Newark Eagles, a Negro League team that positioned Jackie Robinson to become the first African-American ballplayer drafted into the majors.

AG Ford has illustrated picture books for luminaries including NBA legend Kareem Abdul-Jabbar and South African archbishop Desmond Tutu. In 2012, the artist partnered with Martin Luther King III, the son of the celebrated civil rights activist, to publish My Daddy: Dr. Martin Luther King, Jr. Ford’s illustration, “Going to School,” depicts a group of African-American elementary school children lined up to walk through the doors of a school that had been, until that moment, segregated.

“Ford’s style is realistic, which is very appealing to children,” the curator says. “I love the fact the artist presents the wide range of emotions exhibited by children who were involved in desegregation — shyness, angst, embarrassment, pride — not just a singular perspective. You really get a sense of what was taking place through these historic moments.”

In 2008’s Bird, author Zetta Elliott crafted the tale of a young artist who uses drawing to cope with the emotional turmoil of his grandfather’s death and older brother’s drug addiction. Illustrator Shadra Strickland combines line and watercolor to demonstrate how a positive self-image and creative imagination can be sustained despite hardship.

“Children’s books are usually seen as pretty, cute and fun,” Shaiman says. “But history can unfold through the books, especially ones written and illustrated by African-Americans. They tell a different, authentic side of the story and draw attention to the fact that marginalization should not be ignored.”