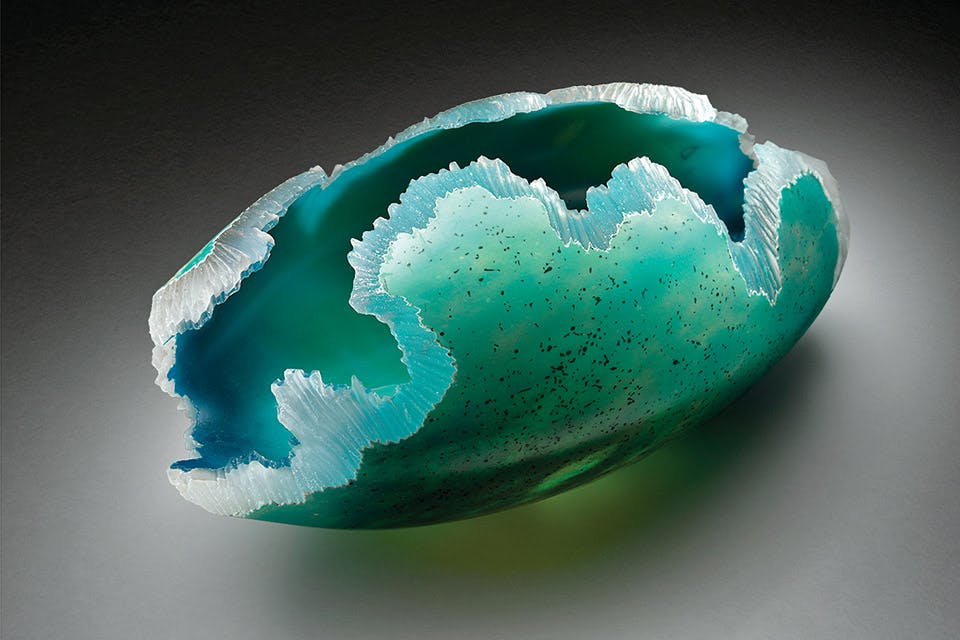 The layers of blue and sea green seem to crack open along jagged coastal edges in artist Robert Coby’s blown-glass piece “Oceana.” His process involves creating the shape he wants and then adding additional layers of colored glass. Once the material cools, he grinds a texture into the surface.

“My inspiration is mostly from the features and processes of natural landscapes,” Coby explains. His “Coastline” series incorporates negative space and multiple openings to give the effect of an eroding coastline. Pieces in his “Topography” series are engraved to resemble topographical maps.

Coby began his career as a drawing major at the Cleveland Institute of Art, but he discovered a passion for glass after attending a glass shop class with a friend.

This month, you can see new pieces of Coby’s intriguing artwork at the Columbus Arts Festival, held June 10 through 12 along the city’s downtown riverfront. More than 300 artists from 35 states and four countries will take part in this year’s festival, and Coby will be one of more than 60 Ohio artists there. Attendees can browse the impressive collection of works on sale and meet the people who made them.

“The range of artists is unbelievable,” says Scott Huntley, director of the Columbus Arts Festival, “and the quality of the artists, particularly this year, is extremely high.”