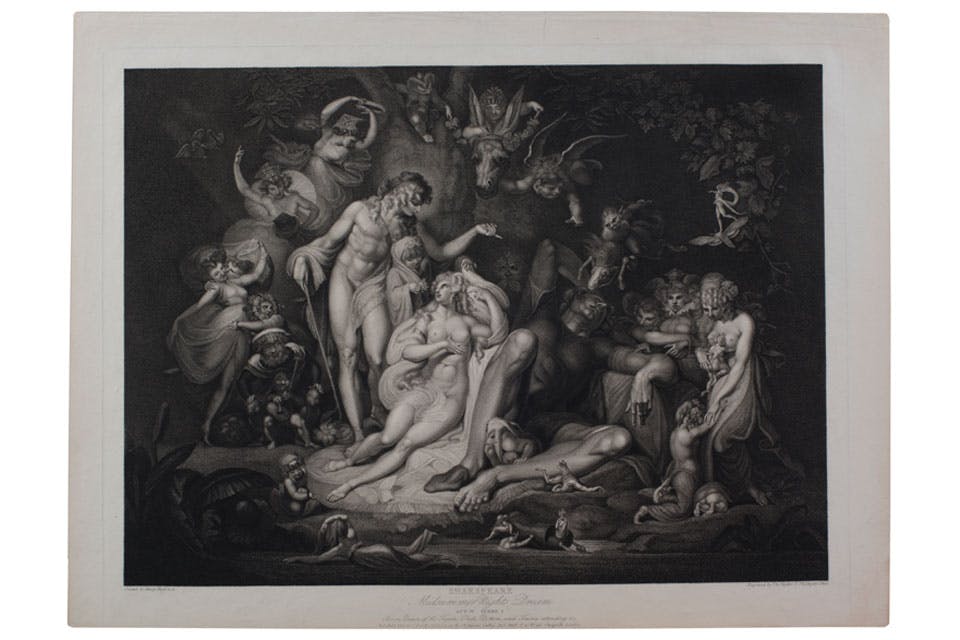 The Toledo Museum of Art celebrates the 400th anniversary of William Shakespeare’s death with an imaginative take on the Bard’s body of work.

Toledo Museum of Art curator Christina Larson vividly remembers the balmy April night 17 years ago when she fell in love with William Shakespeare. A junior at the University of Iowa, Larson was attending a performance of “A Midsummer Night’s Dream,” the Bard’s classic comedy about two sets of lovers and their misadventures in an enchanted forest. Although the play was written around 1594, the director opted to set it in modern-day New Orleans.

“I was familiar with Shakespeare’s plays, particularly ‘The Tempest,’ which I had just finished reading in a humanities class,” Larson recalls. “But what I so loved about this particular performance — and many of the subsequent ones I’ve seen — is that it used visual art to bring the stories to life. That’s why I look for any opportunity to do the same in my work at the museum.”

Through Jan. 8, the curator is fulfilling that promise. To commemorate the 400th anniversary of the playwright’s death, the Toledo Museum of Art is presenting “Shakespeare’s Characters: Playing the Part,” an exhibition of 30 paintings, sculptures, photographs and illustrated books honoring the themes and characters the dramatist brought to life.

For centuries, Shakespeare’s people, places and plots have taken center stage in countless novels, motion pictures and theater productions. Larson credits the dawn of the 18th century with sparking that interest.

“As they do today, Shakespeare’s plays remained popular with theatergoers around the world after his death,” she says. “So, of course, artists wanted to be part of that culture — not only to be creative, but also to create works to sell to captive audiences.”

London gallery owner and publisher John Boydell was one who embraced the public’s demand for the Bard with relish. From 1791 to 1804, Boydell commissioned British engravers to create stipple prints of paintings and displayed them in his gallery. Two of those engravings, patterned after oils by Swiss artist Henry Fuseli, are featured in the Toledo Museum of Art exhibition. Jean Pierre Simon completed “Prospero, Miranda, Caliban and Ariel,” based on a scene from Act I of “The Tempest,” in 1797. Thomas Ryder replicated “Titania’s Awakening” from “A Midsummer Night’s Dream” in 1803.

“Photography had not yet been invented, so engravings were the next best way to promote British art to the public by offering large-scale images that were not paintings,” Larson says. “Although the engravings are based on paintings, the artists who produced them were talented in their own right. They created yet another way to celebrate Shakespeare.” 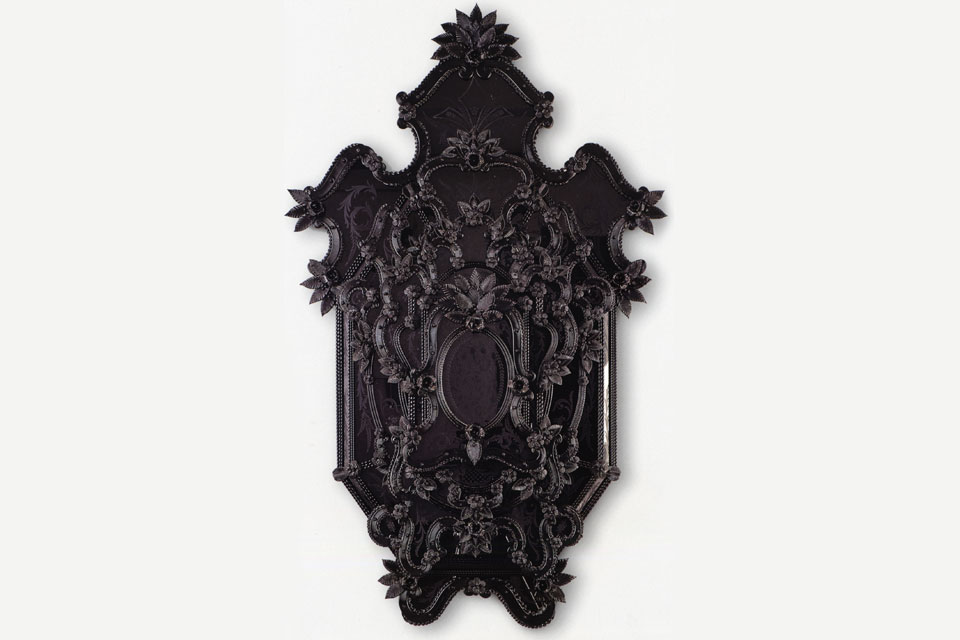 As Toledo Museum of Art curator Christina Larson searched for works to include in the exhibition, she kept an eye out for contemporary artists who paid homage to Shakespeare in eclectic ways. “Iago’s Mirror,” created by artist Fred Wilson in 2009, is one such example. (photo courtesy of the Pace Gallery)

“Ophelia (And He Will Not Come Back Again),” painted by English artist Arthur Hughes in 1865 — one of Larson’s favorite images in the show — presents Shakespeare’s noblewoman from “Hamlet” in a hypnotic way. In addition to the melancholy radiating from Ophelia’s eyes that foretells of her apparent suicide, the canvas is filled with detailed likenesses of flowers and plants Shakespeare included in the play for their symbolic meanings: The willow stood for sadness and forsaken love, the daisy for innocence, and the violets encircling Ophelia’s wrist represented faithfulness.

Although Hughes was committed to staying true to Shakespeare’s words, he added two touches: The poppies in the bouquet, which are not mentioned in the play, represent her imminent death. And, on the back of the painting, the artist hand-wrote the passage from “Hamlet” in which Ophelia sings a song to mourn her father’s death.

“Hughes was associated with the Pre-Raphaelite Brotherhood, a group of English painters, poets and critics who were dedicated to presenting nature and literacy in their work,” Larson says. “Ophelia was an ideal subject for that way of thinking, because she was a beautiful woman who was also a child of nature.”

As Larson searched for works to include in the exhibition, she kept an eye out for contemporary artists who paid homage to Shakespeare in eclectic ways. “Iago’s Mirror,” created by artist Fred Wilson in 2009, is one such example.

Dedicated to using his art to address social issues such as race and class, Wilson worked with Venetian glassmakers to create the Murano glass that was inspired by the story of Shakespeare’s well-respected and powerful Gen. Othello. The piece, which is named after Othello’s archenemy, is designed so that it alters viewers’ reflections as they gaze into it.

“Although a mirror is not mentioned specifically in ‘Othello,’ Fred Wilson uses it as a metaphor about ideas of self-identity and the notion of looking into one’s soul,” Larson says. “I believe the color of the mirror is meant to represent the darkness that is potentially contained in one’s heart.” 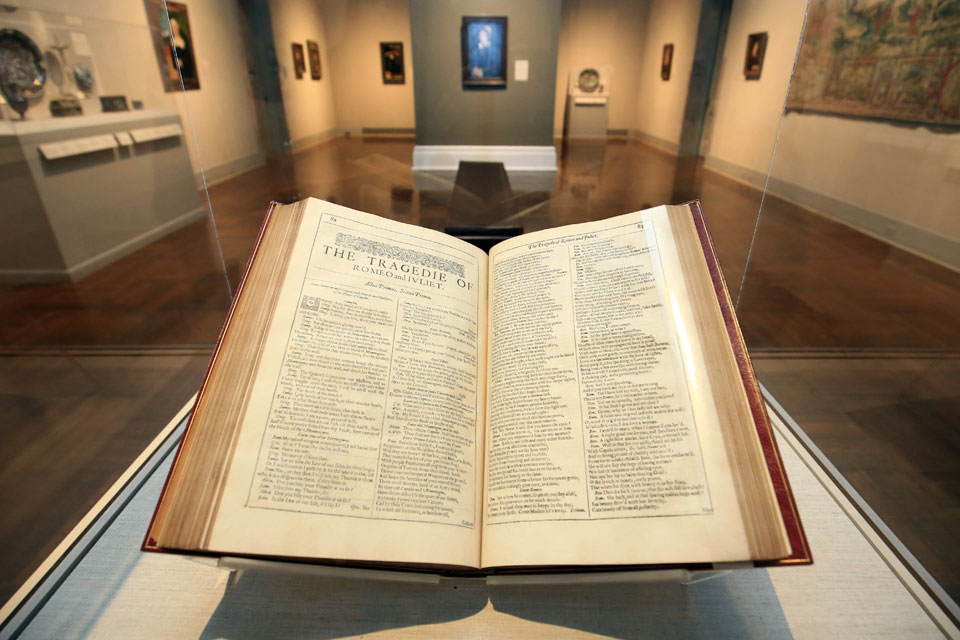 In the first quarter of the 17th century, the two most-often-printed books in the English language were the King James Version of the Bible and the First Folio — or edition — of Shakespeare’s plays.

The Toledo Museum of Art owns an original edition of the Second Folio. William Shakespeare’s Comedies, Histories and Tragedies, a compendium of 36 plays, was printed in 1632, only nine years after the First Folio was published. The hefty tome is clearly the focal point of the exhibition.

“Prior to William Shakespeare’s death in 1616, only 18 of his plays had been printed,” Larson says. “Were it not for the printing of the first and second folios, his complete works would have been lost to posterity.”

The museum’s copy of the Second Folio, which was purchased in 1923, is embellished with Flemish engraver Martin Droeshout’s likeness of Shakespeare, which is regarded as the most authentic image of the dramatist. A verse about the portrait by 17th-century poet Ben Jonson is printed on the opposite page.