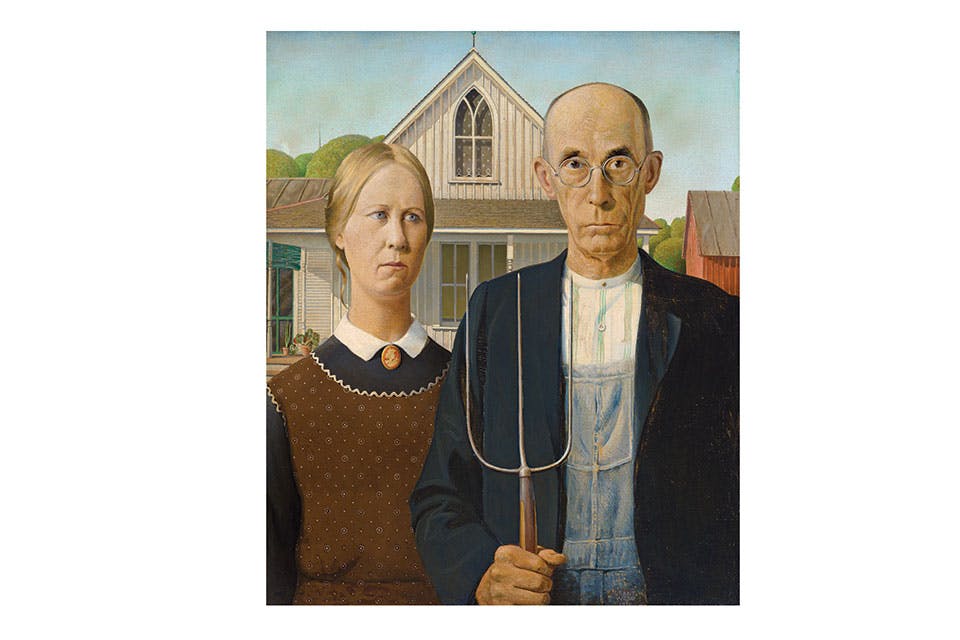 Back to the Land

The Cincinnati Art Museum spotlights Grant Wood’s famous twosome along with other portraits of the Midwest.

Julie Aronson took a deep breath, picked up the envelope and slid it open. The curator of American painting, sculpture and drawing at the Cincinnati Art Museum had anticipated this missive for three years.

In 2011, she’d proposed building an exhibition around “American Gothic,” one of the most famous paintings in the world. But the Art Institute of Chicago owned the celebrated canvas created by Grant Wood in 1930, and it was by no means a certainty that the museum would send it to Cincinnati on loan.

The envelope signaled that after two years of paperwork and phone conversations detailing logistics, a decision had finally been reached. Wood’s famous work would indeed be on its way to Ohio.

From Aug. 30 through Nov. 16, the Cincinnati Art Museum is presenting “Conversations Around American Gothic” to spotlight the painting’s inaugural visit to the Queen City. The exhibition will also showcase the satirical “Daughters of Revolution,” Wood’s 1932 portrait depicting a trio of women who appear to be smugly satisfied with their lineage. Paintings by the artist’s Midwestern contemporaries John Steuart Curry and Thomas Hart Benton will be on display as well. 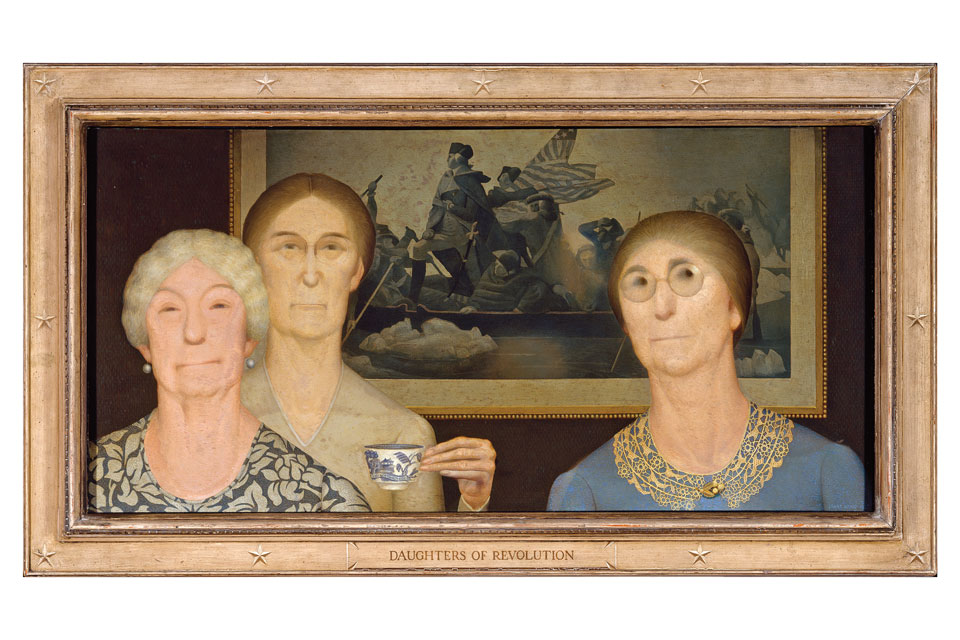 Aronson and her colleagues will return the favor in 2016, when the Art Institute of Chicago borrows “Daughters of Revolution” for an exhibition titled “Freedom and the Brush: American Painting in the 1930s.” “It’s a wonderful opportunity for us to share pictures,” Aronson says.

Along with Leonardo da Vinci’s “Mona Lisa” and Edvard Munch’s “The Scream,” “American Gothic” exudes instant familiarity. In fact, the image of the dour, tight-lipped farmer holding a pitchfork with an equally straight-laced woman by his side has become a pop-culture icon. It’s emblazoned on posters, coffee mugs and greeting cards, and even served as fodder for a “Saturday Night Live” parody.

And yet, muses Aronson, humor was not what the artist had in mind.

“Wood created the painting as a tribute to the Midwest being a land of hard work and honesty,” she explains. “But everyone who sees ‘American Gothic’ derives different meanings from it. I think that’s what’s so fascinating.”

Like many modern artists of the early 20th century, Wood spent time in France and Germany. But as the Great Depression wreaked economic havoc, Europe’s joie de vivre lifestyle lost its luster.

“After the Crash of ’29, many artists began reflecting on the inaccessibility of their styles,” explains Wanda Corn, professor emerita of art history at Stanford University and author of Grant Wood: The Regionalist Vision. “Suddenly, gallivanting off to Paris no longer seemed sensible or affordable when the country was in such bad shape.
Painters began focusing on what was in their own backyard, and the movement known as regionalism was born.”

Grant Wood, along with painters Thomas Hart Benton and John Steuart Curry, became indelibly associated with the new form of expression known for producing insights into the American heartland. Curry and Benton focused on capturing scenes from their home states of Kansas and Missouri, respectively. Wood, an Iowa native, also returned to his roots to paint what he knew best. Captivated by a small farmhouse he chanced upon in the southern Iowa town of Eldon, the artist set about capturing the focal points of the dwelling’s Gothic Revival architecture.

The upper window that resembled a medieval arch served as inspiration for the painting’s title. Wood asked his sister, Nan, and his dentist, Dr. B.H. McKeeby, to pose as a farmer with his spinster daughter. The highly detailed styling and rigidness of the figures were inspired by the 16th-century Flemish art Wood admired.
The artist worked on the painting for about two months, finishing just in time to enter it in a juried show sponsored by the Art Institute of Chicago.

Alongside the other submissions, which included modern still lifes and landscapes, the 30- by 25-inch “American Gothic” looked quaint, but it was accepted for the exhibition and won a prize. No one was more surprised than Wood when the art institute bought the painting for $300 and made it part of the museum’s permanent collection.

“Up until that point, his work, comprising mostly impressionist landscapes and portraits, had gone virtually unnoticed,” Corn explains. “But ‘American Gothic’ became an overnight success.”

The nameless twosome depicted in it became subjects of worldwide speculation: Was Wood mocking them or honoring their tenacity? Were they husband and wife or dad and offspring?

“If you look at the painting from the artist’s point of view, it was a father and daughter,” Corn says. “But from the very get-go, people have seen it as a married couple, and it has continued to be interpreted that way for more than 80 years.”

Wood’s prolific career continued until his death in 1942. Among his other principal works are paintings depicting moments in American history (“The Midnight Ride of Paul Revere”) and farm scenes (“Spring Turning,” “Fall Plowing”). But “American Gothic” has endured.

“It’s a little like the ‘Mona Lisa,’ ” Corn says. “We don’t know why she’s smiling slightly and ever-so-provocatively, and you and I could come up with a variety of interpretations ... ‘American Gothic’ provides a template for many different stories we all can relate to.”

Author Wanda Corn will present “The Three Lives of Grant Wood’s American Gothic” at the Cincinnati Art Museum on Oct. 26.