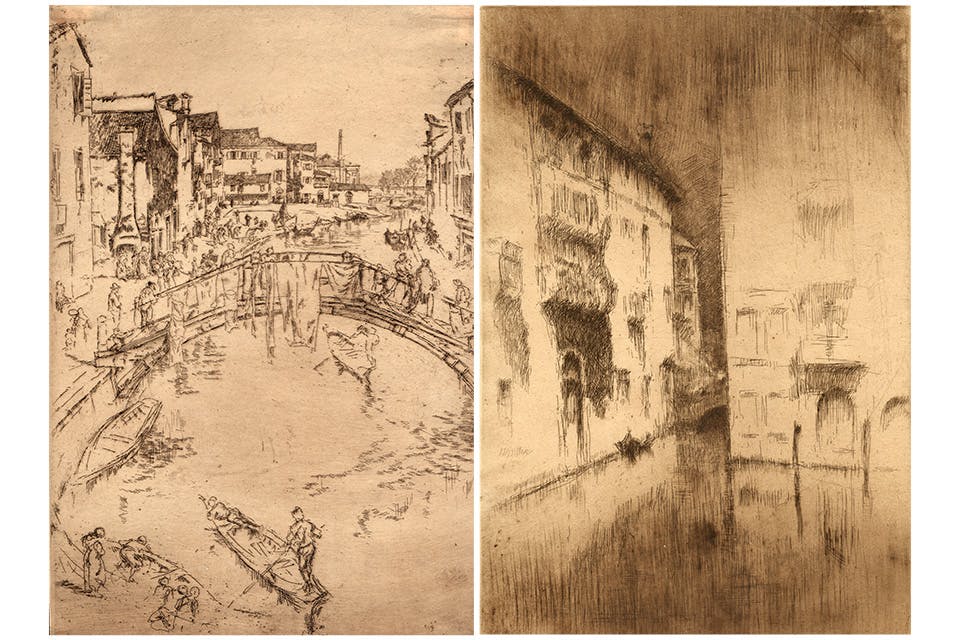 ‘An American in Venice: James McNeil Whistler and His Legacy’

The Zanesville Museum of Art features 12 prints made by James McNeil Whistler alongside works by 23 other artists.

Over the centuries, James McNeil Whistler’s 1871 painting of his pensive mother has become an icon, gracing T-shirts, posters and coffee mugs. But that’s not the only form of art for which the Massachusetts native is known. Through Jan. 4, the Zanesville Museum of Art is presenting “An American in Venice: James McNeill Whistler and His Legacy,” featuring 12 prints the artist made from etchings he created in Italy between 1879 and 1880 for the Fine Arts Society of London.

“These prints are among the most important in his career,” says Laine Snyder, executive director and chief curator of the Zanesville Museum of Art. “During the 14 months he spent abroad, Whistler did not create scenes of typical tourist sites. Instead, he wandered the canals and lesser-known back streets to capture the slices of life he called ‘Venice of the Venetians.’ ”

The result was an immediacy and energy not found in the commercial and calculated images other artists made during the era. Whistler’s penchant for breaking new artistic ground also extended to his technique: When etching the scene before him, he’d focus solely on a single point of interest and meticulously re-create it with a minimum number of strokes. The artist left the rest of the space blank and selectively wiped the etching plate to create atmospheric effects with ink that ranged from morning mist to the night sky.

The traveling exhibition, organized by the Syracuse University Art Collection, contrasts Whistler’s work with 23 other prints by artists who also worked in Italy during the late 19th and early 20th centuries. They include American etcher Joseph Pennell, watercolorist John Marin and Australian painter Mortimer Menpes.

“Whistler was no shrinking violet when it came to pushing the art world forward,” Snyder says. “His legacy lies in the far-reaching vision he had for both his medium and his subject.”