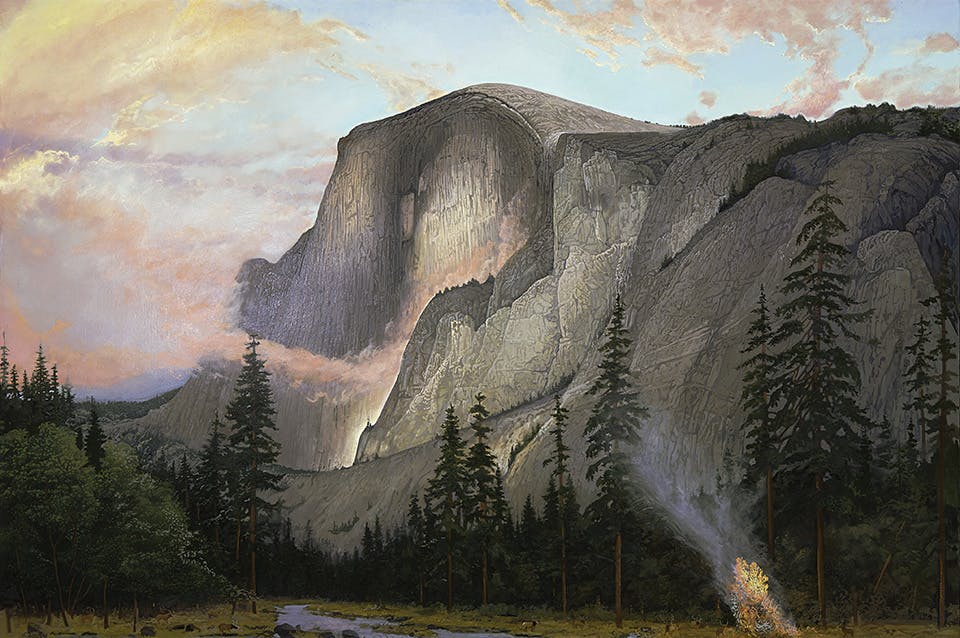 Water ripples over pebbles in a riverbed below vivid fall foliage as mist rolls off a steep cliff above. This serene image of the Buffalo River is one of the sprawling landscapes in “America’s Epic Treasures featuring Preternatural by Michael Scott” at Cincinnati Museum Center.

The exhibition, which runs through Jan. 8, features 33 of the artist’s large-scale paintings and a variety of field sketches organized around the four elements: earth, air, fire and water. The paintings include works from Scott’s “Preternatural,” a series painted at national parks and other wilderness areas. The exhibition also includes 19th- and 20th-century pieces from the center’s collections.

“Somewhere between the mundane and the miraculous, exists the preternatural,” says Scott. “That is what I have tried to paint with my sojourns to these wild places in America that offer us a glimpse of why we need to protect certain lands.”

The result is a series of richly detailed, large-scale oil paintings depicting the vastness and beauty of places like Yosemite National Park and Glacier National Park. Scott presented the exhibition to the Cincinnati Museum Center and has added context to the art by way of fossils and animal specimens displayed alongside the paintings. He also recruited Cincinnati composer Rich Bitting to create a soundtrack for the galleries.

“Rich has made recordings of natural sounds — everything from the inside of beaver dens to rain, wind blowing and the crackling of fire,” says Scott. “That’s really going to activate the paintings in a different way.”

The 19th- and 20th-century pieces from the museum’s collection feature local landscapes from Cincinnati and the surrounding region by artists like William Louis Sonntag and John Casper Wild. They depict the forest that once surrounded Cincinnati as well as the smokestacks that rose during the Industrial Revolution.

“We have earlier paintings that have a primordial aspect, and others that frame Cincinnati as civilization in the wilderness,” says the Museum Center’s registrar, Maat Manninen.

These predecessors to Scott’s works show that the exhibition’s overarching themes of conservation in the face of climate change and habitat destruction are not new.

“We hope that people take a greater appreciation of the world around them after seeing the show,” says Manninen, “maybe even want to go out and explore these places and realize that there is a connection to it.”