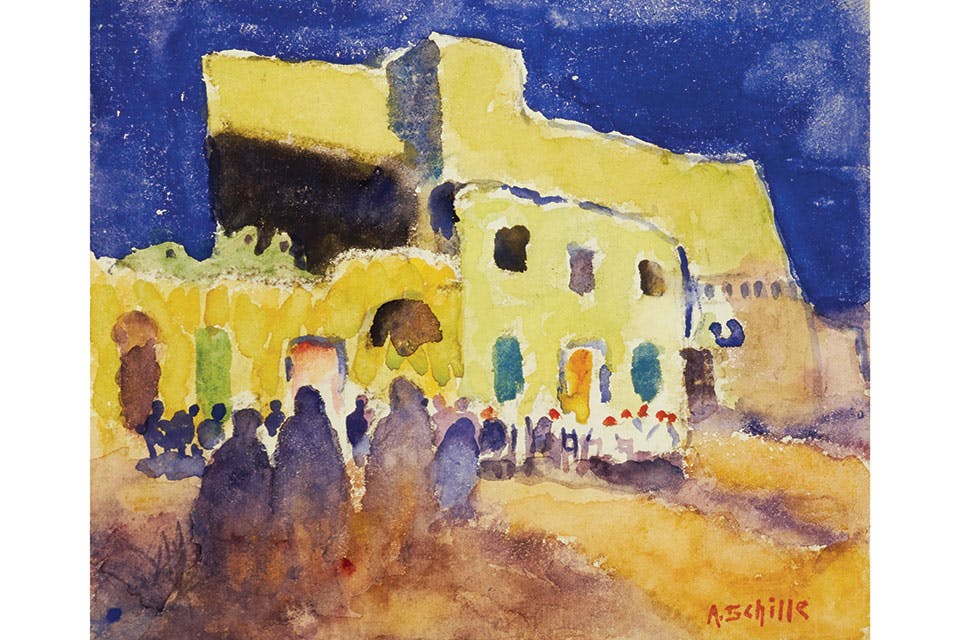 The Canton Museum of Art presents a collection of small-scale works the Columbus artist created during her travels around the world.

January 2020
BY Linda Feagler | Artwork courtesy of Julie B. McGregor

January 2020
BY Linda Feagler | Artwork courtesy of Julie B. McGregor

Even though Jim Keny never met acclaimed Columbus watercolorist Alice Schille, she always seemed like part of the family. Keny’s grandmother lived next door to the artist in the 1880s, and his mother, Julianne, posed for a portrait when she was 11. While growing up, Keny and his brother Tim were regaled with stories about Schille’s world travels, which included stops in Africa, Paris and Mexico to paint, and the litany of prestigious arts prizes she received.

So it made sense that when he and Tim opened Keny Galleries in Columbus in 1980 — specializing in American impressionism and turn-of the-century works with a focus on Ohio — one of their first orders of business was to learn more about the artist they’d heard so much about.

“We said, ‘OK, is this person really as famous as our mother said?’ ” Keny recalls with a laugh. “And the more we discovered, the more we realized this woman was incredible. We became fascinated and spent the next 38 years working on researching her.”

Through March 8, the Canton Museum of Art is celebrating the 150th anniversary of the artist’s birth by presenting “Gems of Modernist Brevity: Alice Schille Watercolor Miniatures,” 30 diminutive paintings she created on pieces of ivory watercolor paper that are typically no larger than 5-by-6 inches. Organized by Keny Galleries and the Schumacher Gallery at Capital University in Columbus, the exhibition showcases Schille’s versatile painting styles, which ranged from impressionism to post-impressionism and fauvism to cubism. 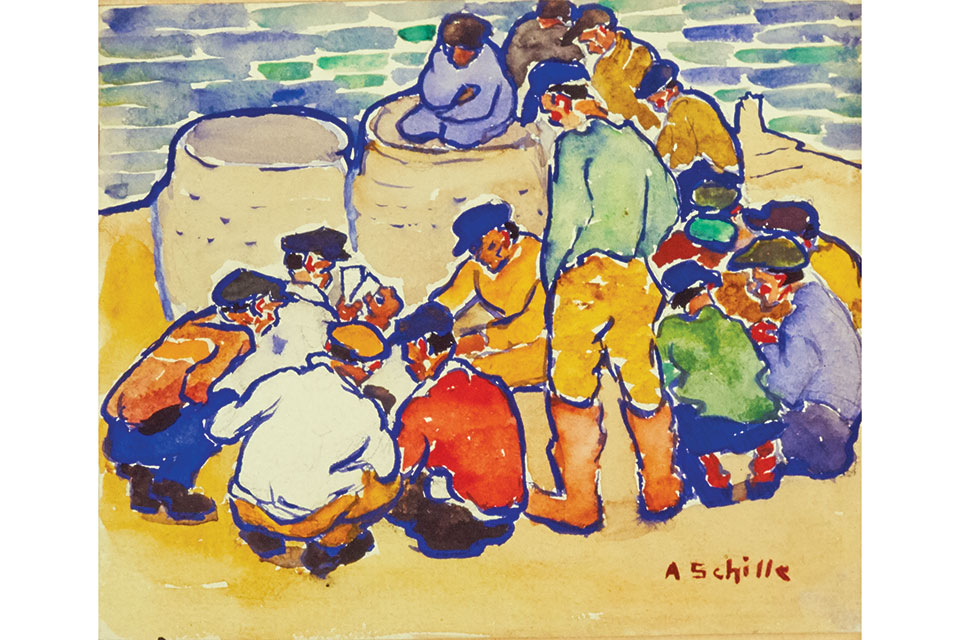 The origin of miniature painting dates back to 16th-century England and France, when artists began painting tiny watercolor portraits for members of the aristocracy. The popularity of the art form waned in the 1860s due to the advent of photography, but made a comeback during the early years of the 20th century. Schille was fascinated by its renaissance and took on the challenges of creating small-scale work.

“Although Schille painted large canvases, she started doing miniatures in 1910 or so,” Keny says. “Many of her scenes feature markets, women, children and landscapes. When you look at all the detail she included in such a small space, you can’t help but wonder how she did it without creating a mess. It’s really an amazing feat.”

Christy Davis, curator of exhibitions at the Canton Museum of Art, learned about Schille’s talent while earning her bachelor of fine arts degree in studio art at Capital University. 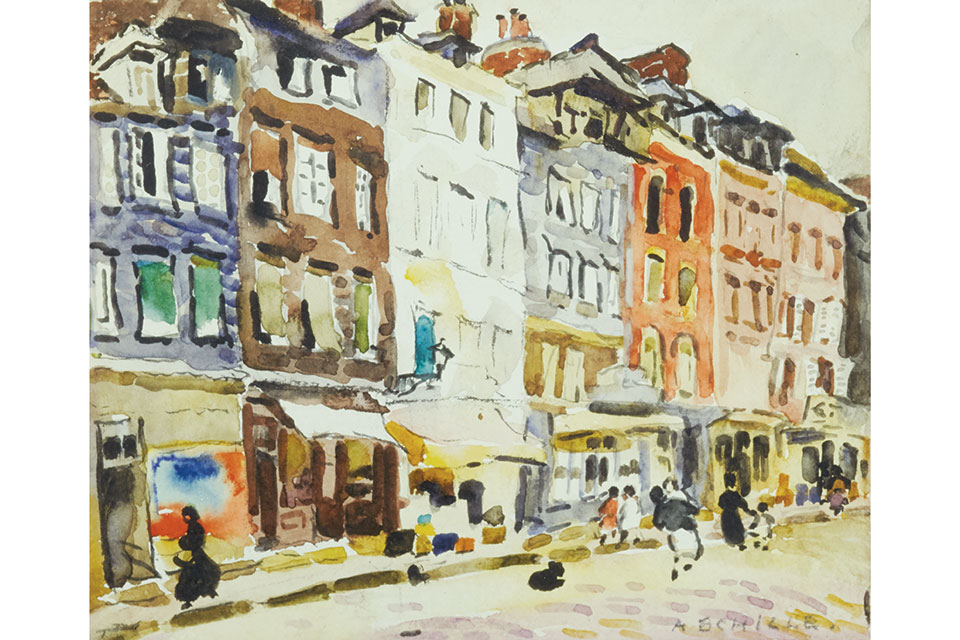 “It’s understandable that Columbus is proud of Alice Schille,” Davis says, citing “Shop Windows, New York,” which the artist completed in 1915, as one of her favorites. In it, Schille combined fauvism, a style of painting emphasizing strong color over realistic representation, and pointillism, a technique in which small, distinct dots of color are applied to form an image.

“Before I started working on the exhibit, I’d only seen photographs of her miniature work,” Davis says. “Seeing this piece in person, the pops of color really caught my eye. It’s amazing the sense of control she had in capturing the smallest detail — the storefronts, the chimneys, the figures walking down the street and the sense of motion that’s there as they interact with each other. It’s a really incredible piece.”

Schille took fauvism a step further during the summers of 1916 to 1918, when she traveled to the fishing village of Gloucester, Massachusetts. In “Game of Cards,” which dates between those years, figures are surrounded by strong blue lines and large areas of pure, flat color.

“The ocean is represented by a series of blue and green blocks floating parallel to the picture’s surface rather than receding,” Keny says. “It’s an example of Schille moving further into post-impressionism and abstraction.”

“It was pretty amazing she made those trips at a time when not too many women did,” he says, crediting Schille’s mother, Sophia, with supporting her daughter’s career. 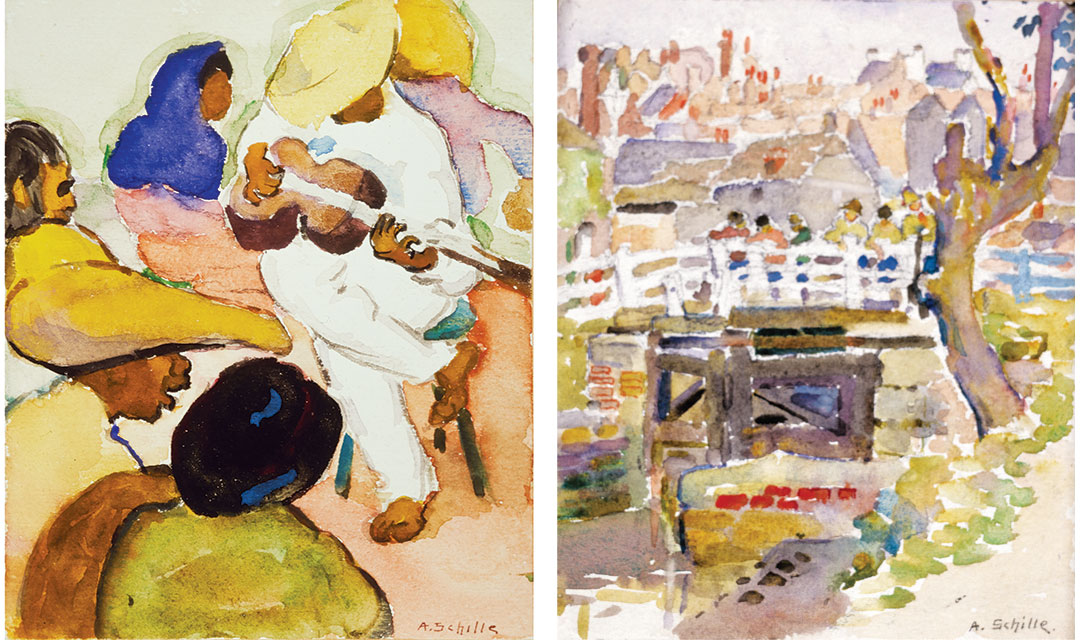 “Guitar Player in White,” which she completed in Mexico in 1923, captures the cadence and rhythm the country is known for through use of color and contrasts between light and dark.

“Schille’s works are always animated,” Keny says. “They feel alive and you get that sense here. You can feel the influence of Diego Rivera and other Mexican muralists here in the simplification of forms that is distinctive to this particular work.”

The ambiance of North Africa clearly sparked the artist’s imagination, as evidenced in a letter she wrote to her mother and Keny shares. “… It was a glorious moonlit night and I watched the palm trees and the lovely villages with their lights reflected on the water …”

Her admiration for that color and light is mirrored in “Gathering, North Africa,” which she painted in 1922. Keny likens it to the expressive work of Matisse, since Schille distinctly emphasized her feelings about the subject in the work.

Her admiration for that color and light is mirrored in “Gathering, North Africa,” which she painted in 1922. Keny likens it to the expressive work of Matisse, since Schille distinctly emphasized her feelings about the subject in the work.

“There’s a real sensitivity as the mood of the evening falls,” he says. “The climate is normally blazing hot, and you can see it’s getting cooler. Whenever I look at this watercolor, I try to imagine how, as a single female artist, she is sitting alone in cafes that are all men, and how she is watching and portraying this haunting mood that’s eloquent with these deep colors.”

Keny points to the doorways and arches that add abstract touches to the scene. “With Schille, these are never just simple forms. They are often beautiful abstractions that bring a lushness to the piece,” he says.

After her mother died in 1945 at age 101, Schille faded from the public eye. She lived a quiet life until her death in 1955. Davis appreciates the fact the artist’s work has made a resurgence.

“The works in the exhibition are so small, but when you get up close, you see her wonderful sense of design,” the curator says. “She was a genius in taking shapes and colors and building them into amazing structures.”