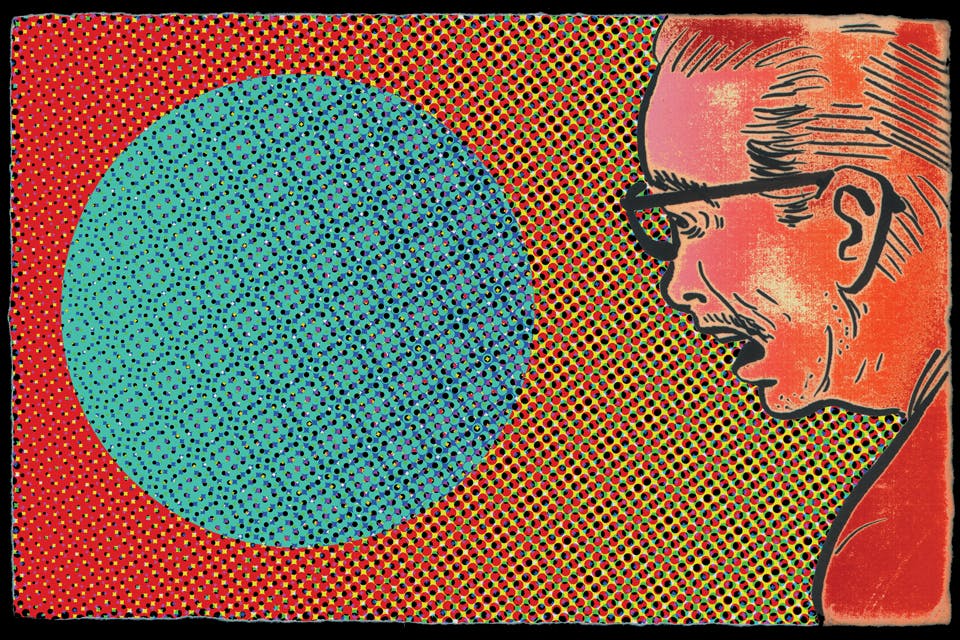 Seven-year-old Mark Mothersbaugh was the quintessential outcast, a misfit scorned by teachers and classmates alike — a boy whose faulty eyesight gave his daily surroundings the soft blur of impressionist paintings.

“I was legally blind and didn’t know it,” recalls Mothersbaugh of his years growing up in Cuyahoga Falls. “My second-grade teacher would ask me to add up the numbers on the board and I would say, `What’s the board?’ I wondered how the other kids knew the right answers.”

All that changed the day an optometrist fitted Mothersbaugh with his first pair of glasses, a development that finally allowed him to connect with the world around him.

“I still remember coming over the hill and seeing the school I had walked to every day for the first time,” he says. “I saw the woods I had walked through. I’d never seen a chimney with smoke, never seen birds or clouds. I was totally amazed.”

The following day at school, he began to draw trees. “The same teacher said, ‘You draw trees better than me.’ No teacher had ever said anything nice to me. I went home that night and dreamt I was going to be an artist.”

Mothersbaugh, known best as the frontman for the American rock band Devo, has been creating art ever since. An exhibition of his work, “Mark Mothersbaugh: Myopia,” is at Cincinnati’s Contemporary Arts Center through Jan. 9 and serves as a testament to his lifelong passion for art. The collection includes more than 30,000 pen-and-ink postcards, altered photographs, paintings, rugs, videos, sculptures and what the artist calls “orchestrions” — electronic instruments he makes from antique and found objects. 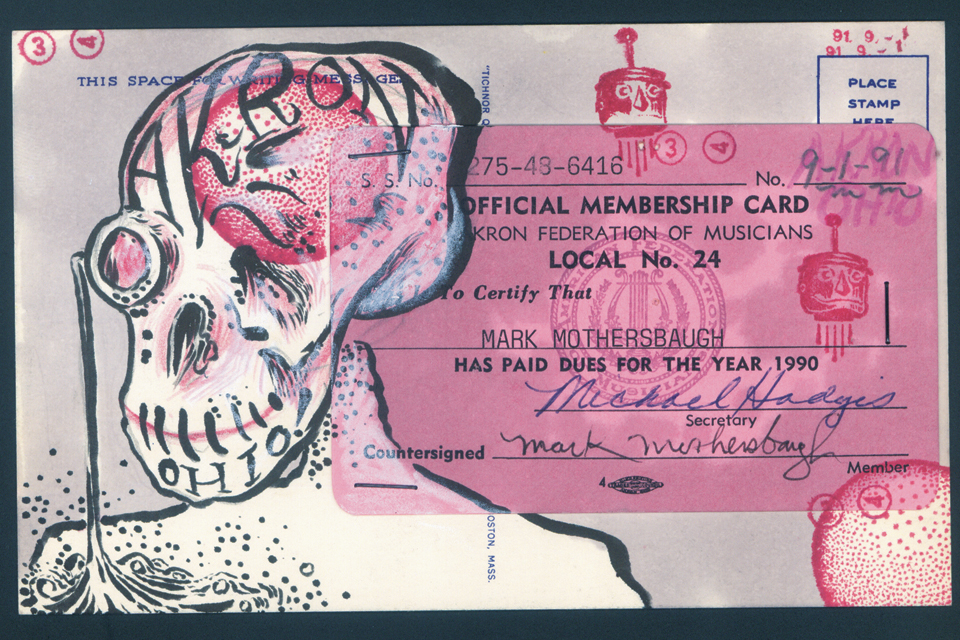 Mark Mothersbaugh has created thousands of postcard-size works, such as this piece from 1991, over the years. The exhibition displays them in a series of albums. (artwork courtesy of Princeton Architectural Press)

“He’s such a jubilant, bubbling, creative spirit, and meeting him confirmed all of our hopes and anticipations,” says Steven Matijcio, curator at the Contemporary Arts Center. “He likes the idea of disorienting you, the idea of making the familiar strange.”

There is surrealism galore in “Myopia,” including “My Little Pony,” a 4-foot-tall ceramic sculpture of a headless horse, and “Anita’s First Boyfriend,” an altered vintage photo from Mothersbaugh’s “Beautiful Mutants” series. One of the most eye-catching pieces is “Ruby Kusturd,” a sculpture carved out of a giant ruby resting atop a bronze holder.

Then, there is Mothersbaugh’s “Mechanical Aviary” — a tepee-shaped device crafted out of musical doorbells, bird calls and organ pipes he collected from around the world. “I didn’t think they could exist with each other, but it’s a magical sound,” he says. “In some ways it’s the most joyous part of the exhibition.”

“Myopia” is a far cry from Mothersbaugh’s 1975 debut at the Packard Gallery in Akron, when he unveiled just a few of his postcards and hand-stamped prints. Between 1995 and 2014, he did more than 150 smaller gallery shows.

“I have done gallery shows in an attempt to interact with young gallery owners, who were start-up, street-level people around the world,” says Mothersbaugh. “Some of them were the best artists in town and didn’t even know it. It was a chance to work with people who are still as excited about art as I was back in Akron.”

As a freshman art student at Kent State University, Mothersbaugh was known for creating glow-in-the-dark decals, which he posted around campus. During his time at the college, he threw himself into visual art.

“At 3:30 when the bell rang, everyone jumped out of their seats and went off to their big social events,” he says. “I could work on a silkscreen print without having to wait in line [for the equipment]. By 6 a.m., I would have finished a whole print edition.”

Kent State is also where Mothersbaugh met Gerald Casale, with whom he later founded Devo.

“We looked at the world around us and saw just as much evidence it was devolving as it was evolving,” says Mothersbaugh. “We wanted to have a dialogue of sound and vision. We thought rock ’n’ roll was going to die a natural death.”

Devo’s subversive slant on music took the legendary New York City clubs Max’s Kansas City and CBGB by storm during the 1970s. “We were like an A-bomb going off,” says Mothersbaugh.

The group reached its commercial apex with the 1980 hit “Whip It.” After the band’s initial recording contract ended, Mothersbaugh began composing, writing the music for the cult classic “Pee-wee’s Playhouse” and the cartoon “Rugrats.” He has since scored more than 150 television series, video games, art museum commissions and films ranging from Wes Anderson’s “Rushmore” to “The Lego Movie.” At heart though, Mothersbaugh remains the same visual artist who once screened preconcert Devo art films for audiences.

The central focus of “Myopia” is the huge postcard collection that serves as a type of diary. The cards, which Mothersbaugh started drawing 40 years ago and continues to produce daily, are displayed in a series of albums.

“With my eyeglass prescription it’s hard for me to hold perspective on a larger canvas,” Mothersbaugh explains. “These [cards] are my image bank. … At first, [showing them] felt like a real invasion. I never intended for them to be scrutinized by the public.”

Those cards, not to mention the other items “Myopia” showcases, would still be in storage were it not for the efforts of Adam Lerner, director of the Museum of Contemporary Art Denver.

“I only knew Devo as the band with the funny red hats,” he says with a laugh. “In 2011, I was interviewing Mark about another artist, but within 15 minutes I had this very strong feeling that this was the most creative person I had ever met. Making visual art is an incredibly important sustenance for him. I wanted to tell his whole story.”

“We doubled our attendance during the run of his exhibit,” says Lerner. “I was amazed by how many people loved it. They came away from it feeling energized and inspired to be more artistic in their lives.”

Mothersbaugh describes the exhibit as “colorful, at times childish, at times obscure.” After its run at Cincinnati’s Contemporary Arts Center, the Museum of Contemporary Art Cleveland and the Akron Art Museum will host a joint presentation of “Myopia” in May. It is also slated to travel to Austin, Texas; Los Angeles and New York City in the next year.

“It’s one man’s celebration of life on planet earth,” Mothersbaugh says of the exhibition. “It’s something I’ve always dreamt about and something that’s changed my life in a really big way.”