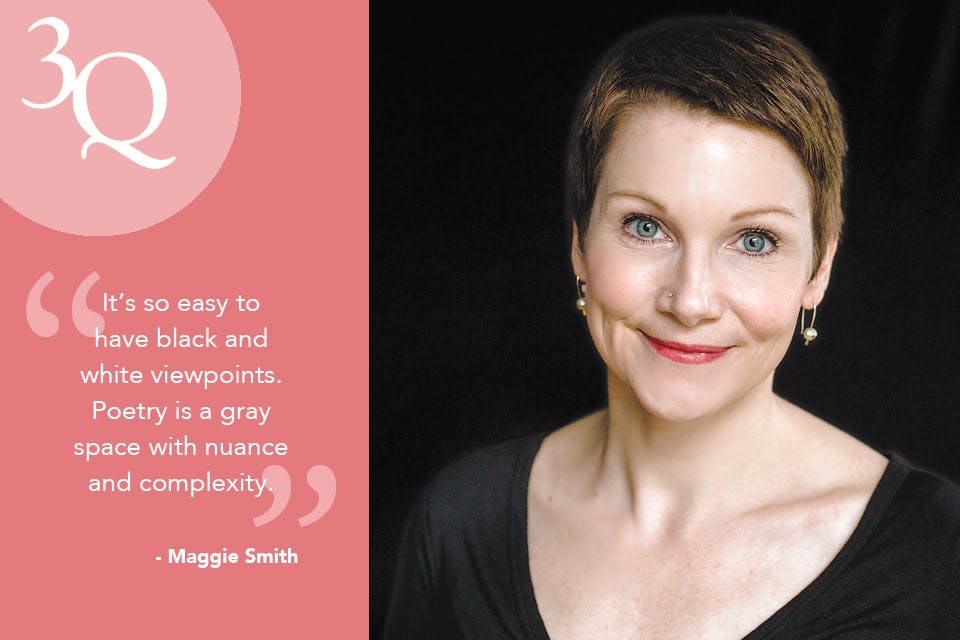 The Bexley resident’s poem “Good Bones” gained worldwide fame for providing comfort in troubling times. We talked with her about the power of poetry.

On a March day in 2015, Maggie Smith sat down at her local Starbucks and began to write a poem on a yellow legal pad. Twenty minutes later, “Good Bones” was finished, a work born out of maternal concern for her two children.

“Poems can’t feed you if you’re hungry, they’re not water if you’re thirsty, and they’re not a tourniquet if you’re bleeding … but poems do make you a better thinker and a more compassionate person,” says Smith, a Westerville native.

But when “Good Bones” was published in June 2016, the poem took on a life of its own. Soon after it was posted online, the poem went viral in the wake of the mass shootings at Pulse nightclub in Orlando, Florida, as its cautious yet comforting message resonated with readers. The poem circulated again following the Ariana Grande concert bombing in the U.K. and the 2017 mass shootings in Las Vegas.

“Good Bones” has been translated into 12 languages, served as the inspiration for an episode of the CBS show “Madam Secretary” and was recited by Meryl Streep during an Academy of American Poets event at Lincoln Center.

“It’s been a strange phenomenon having my biggest success tied in to disasters,” says Smith, who is serving as this month’s guest editor for the Academy of American Poets’ yearlong Poem-a-Day program. She talked with us about her influences, poetry on Twitter and the power of the right words.

How did you first become interested in poetry?
As a kid, my parents got me into the Beatles. I would spend a lot of time listening to them and writing down the lyrics. It was language being turned into a completely different thing. The first book of poems I read was the collected poems of Sylvia Plath. For a teenage girl, that was a perfect introduction.

You are an advocate of Twitter as a means to popularize poetry? Why?
Poetry Twitter is absolutely a thing. “Good Bones” would not have gone viral without Twitter and Instagram and people like Alyssa Milano, Debra Messing and Charlotte Church sharing it. Twitter is only shallow if you’re shallow in it. In some ways, it’s made for poets … so much of poetry is about being precise. If I have 280 characters, I can get a lot said.

How does poetry serve as a source of inspiration during turbulent times?
A lot of people think of poetry as bringing consolation or comfort. We look to poets to articulate things we feel but can’t put into words. I turn to poems for a kind of attentiveness. We’re so bombarded all the time; poetry can make us slow down and open our eyes and minds to new ideas. It’s so easy to have black and white viewpoints. Poetry is a gray space with nuance and complexity.

For more information about the Poem-a-Day program, visit poets.org.