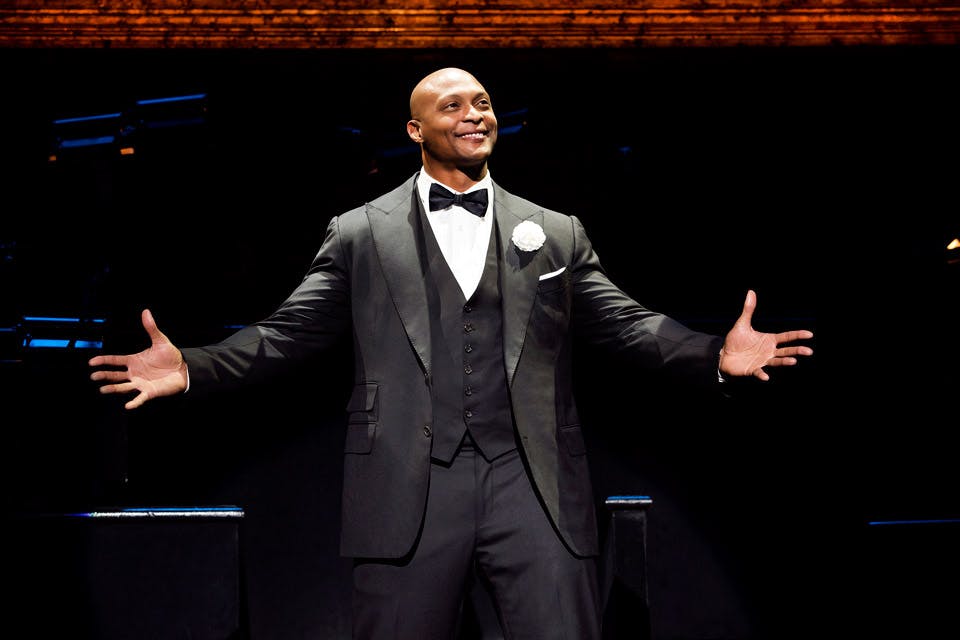 The Heisman Trophy winner and former Ohio State Buckeyes running back shares how he ended up on stage playing Billy Flynn in “Chicago.”

May 2017 Issue
BY Barry Goodrich | Photo by Jeremy Daniel

May 2017 Issue
BY Barry Goodrich | Photo by Jeremy Daniel

Eddie George is accustomed to playing on a big stage. Having won the 1995 Heisman Trophy as an Ohio State Buckeye and playing in Super Bowl XXXIV for the Tennessee Titans, George produced peak performances during the most pressure-packed moments.

But nothing prepared him for the trepidation he experienced the night of his Broadway debut in a 2016 production of “Chicago.”

“Playing in The Shoe against Michigan or Notre Dame is an intimidating environment, even for the home team,” says the 43-year-old George from his home in Nashville. “And there is no greater game in sports than the Super Bowl. But Broadway puts you in a place of vulnerability. It’s like going to Cedar Point and going up on the Millennium [Force] — you’re locked in and there’s no way out.”

George, who reprises his “Chicago” role as the flamboyant lawyer Billy Flynn in a touring production of the show May 9 and 10 at Akron’s E.J. Thomas Hall, talks with us about acting, life after football and succeeding in business.

Are there any similarities between the worlds of football and the theater?
One of the reasons I fell in love with the theater is that I have to trust the other actors like I trusted my teammates. We make sure we have each other’s back. It’s a moment-to-moment process. In football, everything changes in the middle of a play … you have to be prepared for the element of surprise. It’s the same thing in theater. And brain work is like physical work. Sometimes I feel like I’m back at two-a-days.

Many pro athletes struggle when their careers end. How did you deal with the transition?
In my first three years out of football it was very difficult to find what was next. Once you’re done with sports, you’re done. Nothing fulfills that void of being a player. For me it became about the three E’s: education, entrepreneurship and entertainment. There is a synergy among all three.

You’re involved with a landscape architecture company, a financial service firm and Eddie George’s Grille 27 in Grandview Heights. How did you prepare for a successful business career?
Ohio State was very important, on and off the field. I knew that after football I would still be a young man. You have to begin your journey with the end in mind. Engineering school was tough, and I was thinking of another major. But I learned how to manage my time, and I was able to create a company out of that. And now I teach a sports business class at Ohio State.