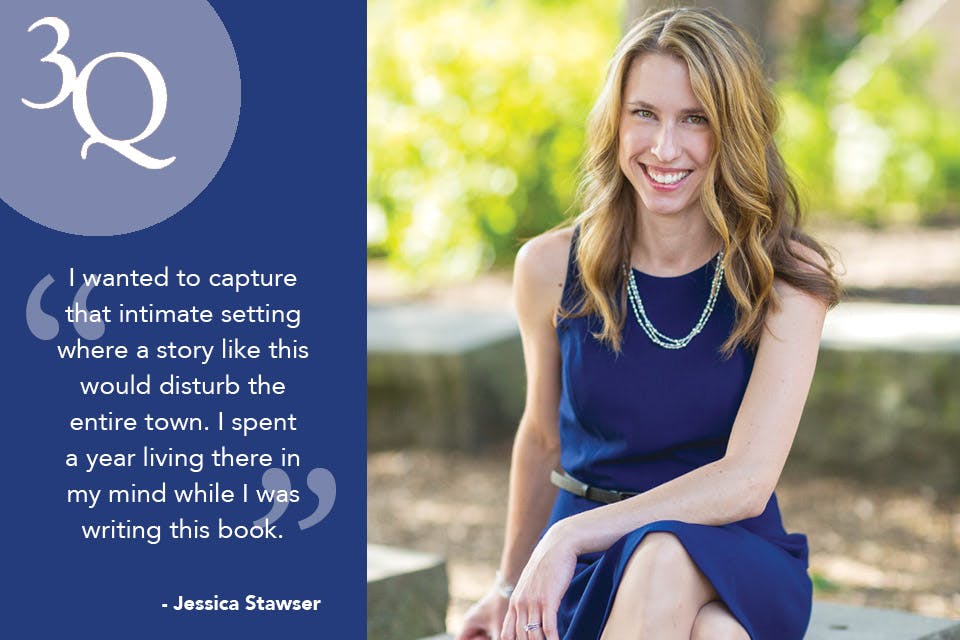 The Loveland resident and Writer’s Digest editor-at-large talks with us about her second novel, Not That I Could Tell.

As a youngster, Jessica Strawser was the ultimate bookworm. While other children were off riding bikes or playing sports, Strawser could always be found with a book and a notebook, sometimes in one very private place.

“We had a cherry willow tree in our front yard, and I would take a book and go up in the tree, pulling off this Harriet the Spy routine,” says Strawser, who grew up in both Pittsburgh and Lancaster, Pennsylvania. “There is a picture of me on Christmas morning, sitting by the tree and reading a book while everyone else was playing with their toys.”

It seemed only fitting when Strawser, a graduate of Ohio University’s E. W. Scripps School of Journalism, landed a job as editor-at-large of the Cincinnati-based Writer’s Digest. Last year, her suspenseful debut novel, Almost Missed You, was published and her new book, Not That I Could Tell (out March 27), uses a mysterious family disappearance for its main theme. The Loveland resident’s books deal with the deeply buried secrets that can be found in any suburban or small-town setting.

“There are fears we all share at a base level,” Strawser says. “I like page-turners, but I don’t like anything that’s too gory and would freak me out before I go to sleep.”

Strawser, who has book signings at Joseph-Beth Booksellers in Cincinnati on March 27 and Books & Co. in Dayton on March 28, talks with us about her writing style, her use of Ohio locales and domestic violence.

Working for Writer’s Digest, you’ve interviewed writers from all genres. How would you describe your own books?
I would say that I’m a women’s fiction and suspense writer although some people call it domestic suspense. I do know that I have quite a few male readers. Some of the best advice I’ve ever had is to write what you like to read. These two books are quite different from the first book I wrote … I’m quite happy with that one staying in my drawer.

Not That I Could Tell is set in Yellow Springs. Why did you choose that locale?
For this book, I felt like I needed a closed environment where everybody knew their neighbors. I wanted to capture that intimate setting where a story like this would disturb the entire town. I spent a year living there in my mind while I was writing this book.

Why did you use domestic violence as a central theme for this book?
It’s something I’ve thought a lot about. I lost a really good friend to domestic violence about 10 years ago. I’ve had an opportunity to talk to a lot of people about it. Lots of people know somebody who has been in a bad situation. I wanted to write a story where someone’s abuse was at arm’s-length for a friend or neighbor.