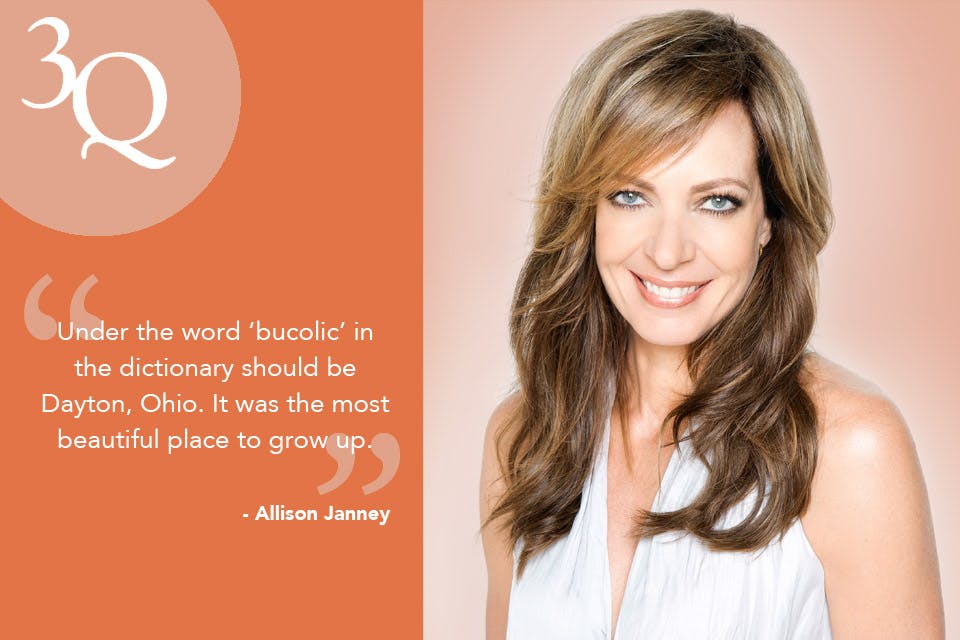 The Dayton native has been recognized with seven Emmy Awards for her television work, including her hit CBS series, “Mom.”

As the intelligent, independent and inquisitive White House press secretary C.J. Cregg on “The West Wing,” Allison Janney became one of television’s most memorable characters, winning four Emmy Awards in the process.

Janney, who was raised in Dayton, attended the Miami Valley School before moving on to Kenyon College in Gambier. In an incredible real-life twist of fate, three Daytonians would eventually co-star on “The West Wing”: Janney, Martin Sheen and Rob Lowe. “What are the odds of that,” says Janney from her Los Angeles home. “It was just remarkable. We all agreed that this just doesn’t happen.”

On Sept. 28, Janney returned home to be inducted into the Dayton Walk of Fame, and the city is clearly close to her heart.

“Under the word ‘bucolic’ in the dictionary should be Dayton, Ohio,” she says. “It was the most beautiful place to grow up.”

Her first acting experience was a sixth-grade production of “Oliver,” portraying the role of the undertaker’s son. “I started out playing either men or 40-year-old women because of my height,” she says.

We recently talked with Janney about another famous actor from Ohio, her favorite roles and season five of her CBS hit comedy, “Mom.”

You met Shaker Heights native Paul Newman during your freshman year at Kenyon. How did that shape your life and career?
He came to direct a play in our new theater, and it was such an enormous thing for me and the other students. Paul and his wife, Joanne, gave so much of their time and were very encouraging and supportive. They saw something in me that I didn’t see and gave me some of my first confidence. And we played pingpong in the green room … I’m very competitive but I’m pretty sure I didn’t beat him.

You’ve won Emmys for your work on “The West Wing,” “Masters of Sex” and “Mom.” Do your characters share any common traits?
All of them have a strength and courage that I love. C.J. is my favorite character of all time. She had an incredible wit, navigating in a man’s world and being able to dress down four-star generals. I’ve always been shy about saying what I want. I never felt comfortable calling myself an actress until I won a [Screen Actors Guild Award].

“Mom” has become a big hit for CBS. What can we expect from the new season?
It’s going to get complicated and fun in the love arena. The stories are centered around love and relationships. We just did the first episode, and it’s hilarious right out of the gate. It’s a really creative format with a tight schedule. It’s very fun, fast and furious.