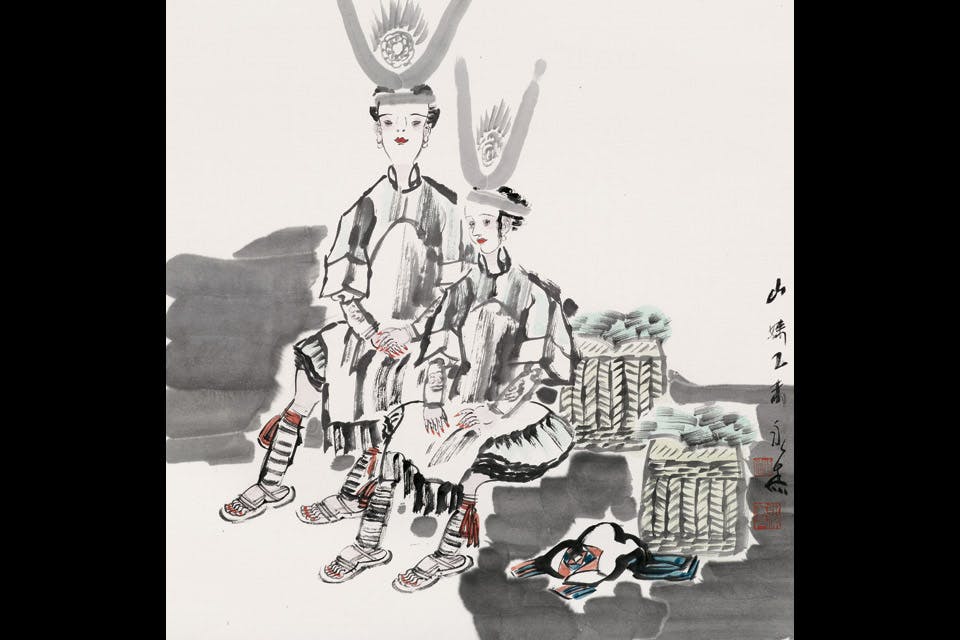 In one image, two girls sit among woven baskets. Another celebrates the joy of fishing. Although the subject matter found in “Imaginative Chang’an: Recent Work from the Chang’an Chinese Painting Research Society” differs from one piece to the next, the ink-wash-on-rice-paper medium connects them all. We talked with Zanesville Museum of Art executive director Laine Snyder about the ancient Chinese city of Chang’an and the modern-day artists who created the works on display.

On the Map: The ancient city of Chang’an, now called Xi’an, served as a capital for 13 Chinese dynasties and was a significant cultural, political and economic center for centuries. “The scholars and the artists of that period really favored this wonderful calligraphy and ink-on-rice-paper painting,” says Snyder.

Modern Masters: The 10 artists featured in “Imaginative Chang’an” use this traditional ink-wash-and-rice-paper medium, while putting a contemporary twist on it. “One artist does extremely blocky types of images that almost looks like caricature,” says Snyder, describing Yang Xiaoyang. “But it’s not caricature, it’s simply a different way of expressing the emotion this artist is feeling.”

Subject Matter: Among the 30 works on display are beautiful landscapes, scenes of small towns, people in their daily lives and a range of animals, including roosters and other birds. “Much of the representations of animals are really to symbolize something else culturally,” Snyder explains. “It could be pride. It could be boastfulness. It could be masculinity.”

Art credit: “Girls in a Mountain Village” by Liu Yongjie