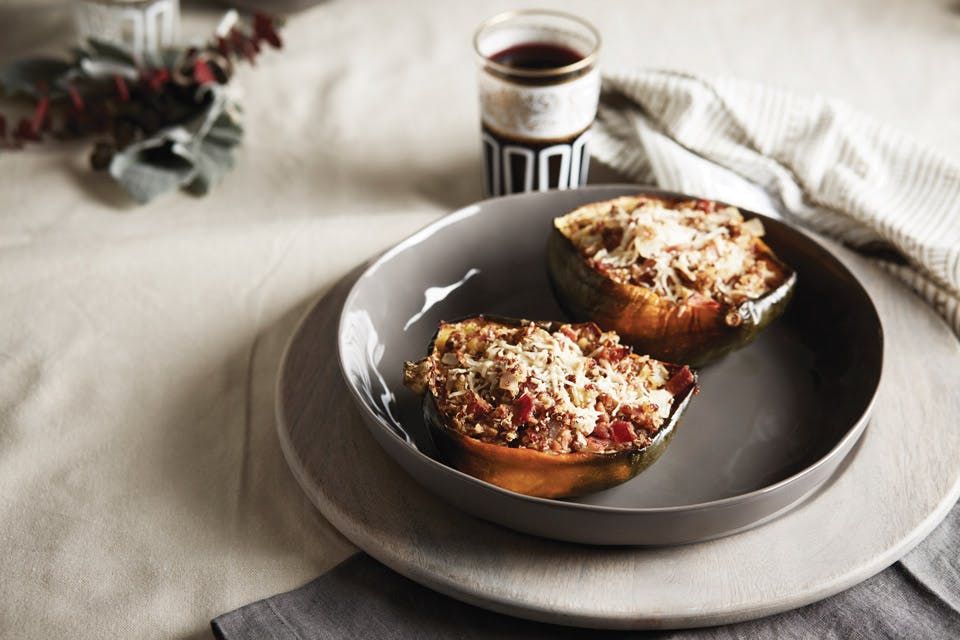 Recipe courtesy of Kindred Spirits at the Inn & Spa at Cedar Falls | Photo by Casey Rearick, styling by Christine Rice

During the fall, Abby Cole highlights late harvest gems like acorn squash, cooking them down into familiar soups or roasting them to toss with pasta. But every now and then, she opts for a more unconventional preparation. “I roast them and then peel the insides out, stuff it back in its shell with whatever I put in it, and then it’s basically a twice-baked squash,” Cole explains.

DIRECTIONS
Preheat oven to 350 F. Cut squash in half and remove seeds. Place in baking dish. Drizzle the olive oil and honey over the squash and gently rub in. Then, sprinkle cinnamon, nutmeg and cayenne pepper on top. Bake about an hour or until the meat of the squash is tender. Let cool slightly when done.

While the squash is baking, saute the onion and garlic until translucent. When finished, place in bowl and set aside. Scoop the meat of the squash out of the shell, carefully as to not tear the outside.

Combine the meat with the onion mixture, bacon, arugula and quinoa (if desired). Season with salt and pepper to taste. Mix thoroughly.

Stuff mixture back into the shells. Bake for another 15 to 20 minutes. Halfway through, sprinkle with Parmesan cheese and finish cooking. Let cool slightly. Serve.